Known locally as Pad Thai Phratu Phi after the ‘ghost gate’ neighbourhood where it’s located, Thip Samai has had 50 years to perfect the recipes and techniques for its signature pad Thai, often cited as the best in Bangkok. It may be the city’s most famous place to try the best known Thai dish in the world, but does Thip Samai deserve the hype? 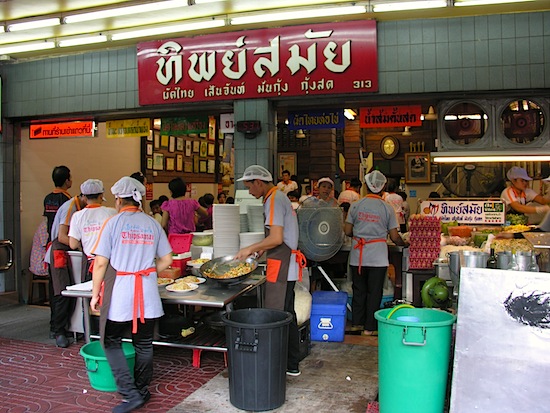 Another busy night at Thip Samai.

Though some snobbish expats proclaim that pad Thai is eaten almost exclusively by foreigners who don’t know Real Thai Food, this is not true. The dish isn’t as popular among Thai people as som tam, khao man gai and kwit-tiao nam, to name a few, but it is a relatively popular street dish regularly enjoyed by locals around the country. We usually prefer the more intense flavours of a Thai curry, spicy salad or chilli paste, but when done well, the golden wok-fried rice noodles can be ever so satisfying.

Pad Thai in its modern form was made popular by a former prime minister, Luang Phibunsongkhram, as part of a World War II-era Thai nationalist movement. In an attempt to claim an originally Chinese-Vietnamese dish as a distinctly “Thai” creation, the prime minister pushed the noodles as a Thai national dish, a label that only seems to have stuck in the eyes of foreigners. Opened in the mid 1960s, Thip Samai jumped on the pad Thai bandwagon well before the dish turned into the Thai equivalent of General Tsao’s Chicken in the West. Today, the nondescript but fairly large open-fronted restaurant is a well-oiled machine operated by an energetic team of orange and grey clad staff.

One team preps the ingredients while several chefs simultaneously saute 10 to 15 portions of pad Thai in single woks. Open charcoal flames shoot sparks on to the footpath. Workers at a separate station plate the noodles, which often entails the addition of a thin crepe-like egg wrapping, before handing them off to a snappy team of servers. While pad Thai is the main draw, Thip Samai is also known for its fresh-squeezed orange juice and coconut shakes.

Thip Samai offers a handful of variations on pad Thai, including a vegetarian and noodle-free version, but their signature offering is pad Thai haw khung sot, found on the English menu under Superb Pad Thai. 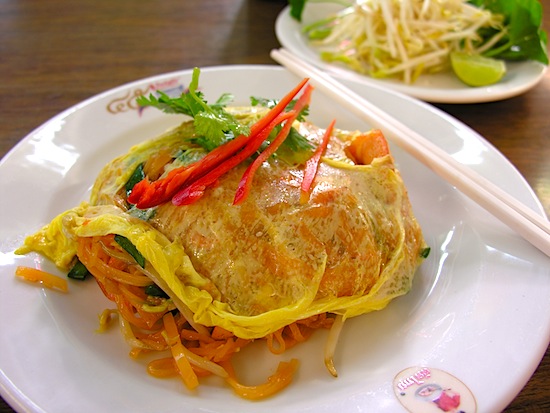 It sure does look superb.

We felt the Superb edition lived up to its name. Compared to similar versions, which often place a full well-done fried egg atop the already filling noodles, the thin and light layer of egg complimented the overall flavour without making the dish too heavy. Along with strips of red pepper and cilantro, it also makes for a memorable presentation.

While standard pad Thai ingredients — dried shrimp, tofu, green onion, tamarind juice, palm sugar and fish sauce — were all evident, Thip Samai adds signature touches that place their version above and beyond the average pad Thai. Sun-dried Chanthaburi rice noodles do a better job of soaking up the flavours than ordinary noodles which we often find too chewy. Coupled with rigorous tossing of the noodles in the wok, the flaming heat of the old-school charcoal stoves keep the dishes from becoming overly oily while also adding a smoky undertone. 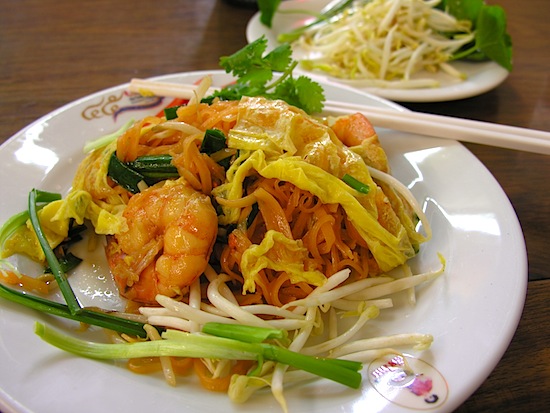 Most importantly, Thip Samai cooks the noodles in the fatty juices of jumbo prawn heads. Those who shy from the fishy might not appreciate how the taste of prawn head underlies every bite, but we felt it made the dish. We were also impressed with the two fresh and meaty prawns that peered from under the egg wrapping.

With a drizzle of fresh lime juice to offset the sweetness and bean sprouts for added crunch, we enjoyed the dish so much that we snagged a couple for the road. Though we haven’t tried every pad Thai stall in the city, we found Thip Samai’s “superb” version to be right there with Sai Jai. 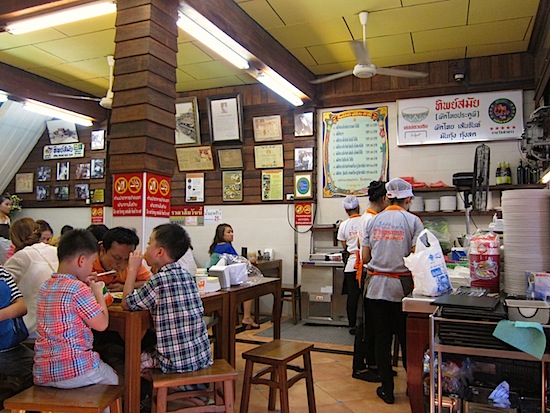 Thip Samai is located on Mahachai Road, directly across the street from Wat Thepthidaram and an easy walk from Wat Saket and Democracy Monument. They’re open only for dinner and pump out the pad Thai until late. Expect a wait to be seated if you arrive between 18:00 and 22:00.