It’d be a mistake to assume that the Siam Square area is nothing but a cluster of malls where hi-so folks go to buy Gucci and eat at corporate chain restaurants. No matter where you are in Bangkok, a street food enclave is always nearby — if you know where to look. In a corner of the shopping district, Phetchaburi Soi 10 and surrounds will leave both you and your wallet nice and full. Forget the malls; THIS is the Bangkok we love.

Not far from the gleam of Siam Paragon and an easy five-minute stroll from Ratchathewi BTS Station, Phetchaburi Soi 10 looks like a typical side lane by day. But when the sun goes down, a plethora of street carts form one giant buffet along the pavement. A few stalls set up basic tables pinched above the curb, but most specialise in finger foods and dishes for takeaway.

To start, pull up a chair at the khanom jeen shop near the mouth of the soi and order a plate of soft white noodles made from fermented rice and topped with any number of pungent curries. We went with gaeng tai pla, a fiery fish-innard curry; ask for gaeng khiao-wan gai (green curry with chicken) if innards sound too intense. You’ll know the place by its massive steel cauldrons of bubbling soup-like curries and a long communal table piled high with veggies. Go ahead and pile those on to cut the spice. 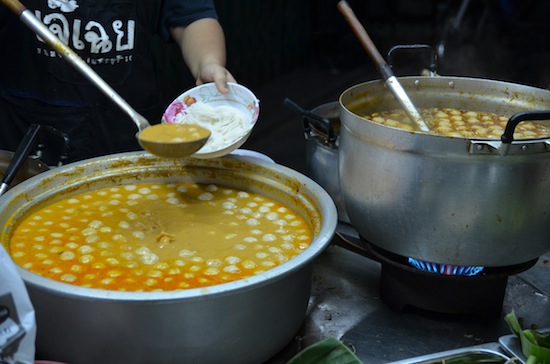 Next to the khanom jeen lady stands a mild-mannered man who grills up skewered balls of sour Isaan-style sausages, or sai krok. Served in a bag with raw ginger, bird’s eye chillies and cabbage, they’re perfect for munching as you wander. 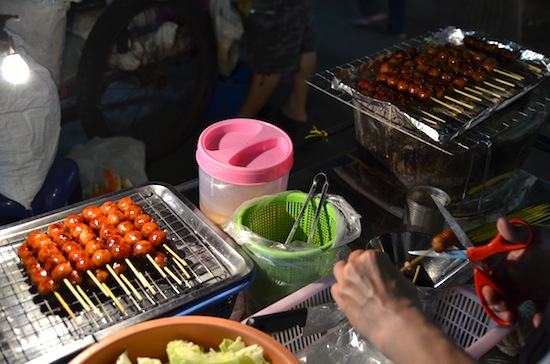 Further down the lane, lined by old two-storey shophouses, several fresh fruit stands sprawl into an alley lit by hanging fluorescent bulbs. Nearby stands an Isaan (Northeastern Thai) native who conjures som tam (papaya salad) and other spicy salads from a mortar and pestle. Her yum kai mod daeng (red ant egg salad) pops like Rice Krispies and storms the taste buds — but only when the tiny white eggs are in season. 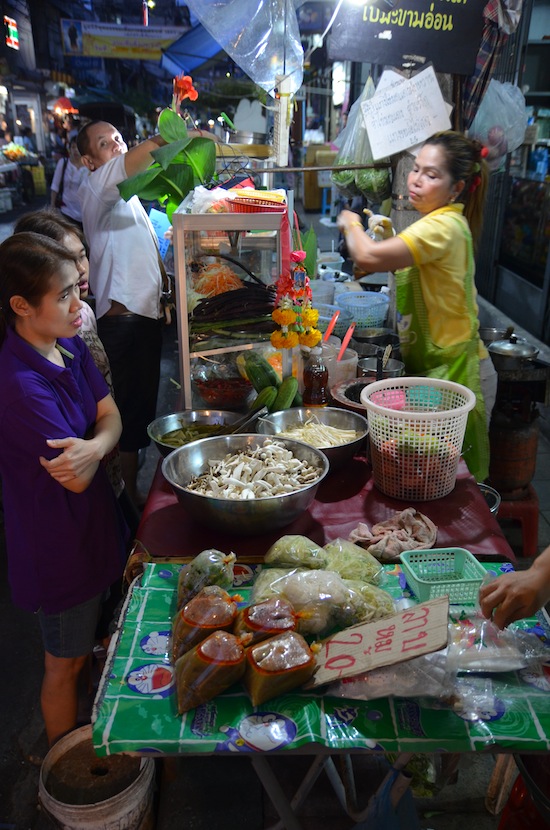 This area is also a good spot for curries and stir-fries with rice, displayed by a few different vendors in the barrage of colour that immediately signals Southern Thai food. We grabbed some pla duk pad prik khing (catfish with ginger and chillies) and found it tasty, though do expect some MSG — inexplicably used by so many Thai chefs to “enhance” food that already romps with flavour. 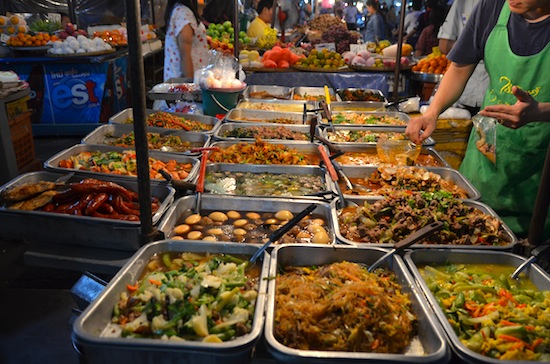 These vendors must have huge kitchens.

If you’re going for the gold medal in spicy eating, move onto one of the nam prik (chilli paste) stalls, decipherable by their heavy ceramic mortars, piles of steamed veggies and fried omelettes chocked full of cha-om, or “climbing wattle” leaf. If you order nam prik pla-tuu, the vendor will grab a whole fried mackerel and pound it into a paste along with roasted chillies and spices. Some of these folks also sell aromatic soups and deep-fried frogs. Look at the focus.

Those who aren’t so adventurous might snag some pork satay along with other grilled meats-on-sticks. One vendor lures customers into a shadowy corner for gai yang (grilled chicken), while several others serve up whole barbecued fishes (pla plao). Another good choice for meat-lovers is muu grob, deep-fried pork belly that’s salty, crispy and tender in each bite. You’ll even find a bakery and Thai-style hybrid sushi. 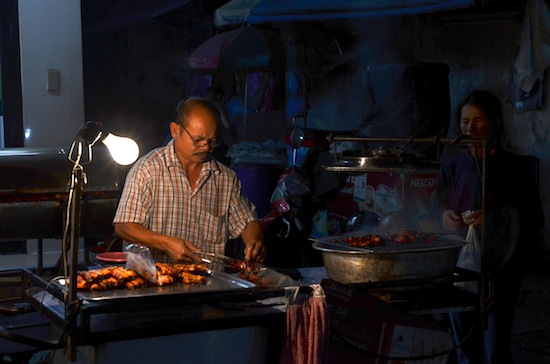 And if you’re not done being adventurous, go for grilled chicken feet.

Phetchaburi Soi 10 isn’t known for its sweets vendors, but one woman fries up khanom krok, sweet and gooey rice-flour dumplings with corn. A 20-baht pouch of these does well to smother the heat from all of those chillies. Oh so fluffy and warm.

If you prefer to properly sit down to eat while watching the traffic flow by, head back towards the BTS station and grab a seat at any of the street eateries that set up next to Phetchaburi Road and specialise in Isaan fare. Of the half-dozen options, we’ve found Krua Mueang Ling at the corner of Phetchaburi and Phaya Thai roads to be the best.

The street vendors set up around 18:00 every day but Monday in Phetchaburi Soi 10 and many keep slinging until 01:00 or 02:00. Take the pedestrian footbridge to the other side of Phetchaburi Road and you’ll find Soi 5, which has a similar atmosphere and also supports an array of food vendors. One shop that’s worth seeking out here does phenomenal tom yum noodles with jumbo prawns.

To reach Phetchaburi Soi 10 from Ratchathewi BTS Station, take the stairs down at Exit 3 and hang an immediate left on to Phetchaburi Road. Walk about a half-kilometre, passing the street restaurants, and you’ll see Soi 10 on the left. From Siam Square or Bangkok Art & Culture Centre, simply walk north along Phaya Thai Road until you hit Phetchaburi Road.

Our top 10 places to eat and drink around Siam Square