Take a swim with Rama

This small, open-air cafe directly adjacent to Or Tor Kor is run by Chinese-Thai folks who hail from Hat Yai in Thailand’s deep south. The no-frills, 15-table joint fills up at breakfast and lunch, with most diners in and out in a matter of 20 minutes. Staff is straightforward and quick, if a tad brash, and they expect customers to order and eat fast since high turnover is the name of the game. The cramped confines feel slightly more upscale than your average street restaurant, but people come for the food, not the ambience — which was good enough for a superstar Thai actress when we last visited. 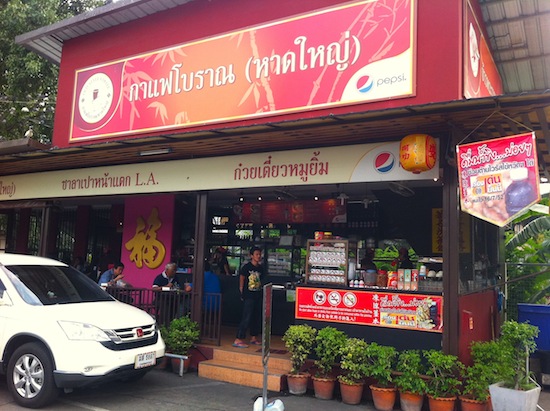 A single-page menu in English and Thai is all about pork. Noodle soups come with the usual choices of spicy tom yum or thammada (simple) broth to go with ba mee (egg-wheat noodles) or a few different varieties of rice noodle. Soups go heavy on sliced pork and liver and we found the spicy and sour tones of the tom yum broth well balanced. 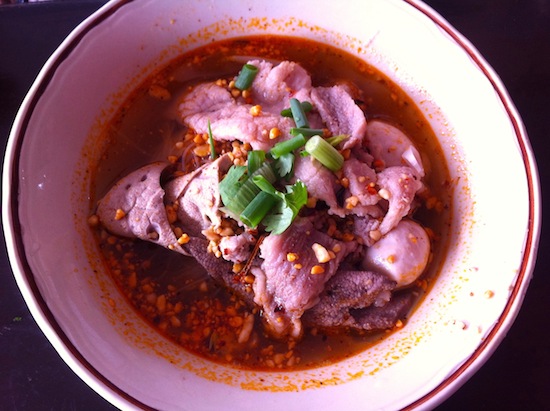 Grilled luuk muu (pork balls) and spicy pork ball salad are also offered along with a handful of desserts, including steamed bread with pandan custard and sala bao muu (steamed pork buns). Prices range from 12 to 50 baht per dish, and all are good, though all but one are easily found throughout Bangkok.

That one reason we’re willing to endure a long taxi ride and skytrain transfer just to reach Cafe Boran Hat Yai is for what’s disguised on the menu in English as “pork satay with rice”.

It sounds almost as exciting as liver and onions until you translate the Thai name, Phra Ram long song or “Rama takes a bath“, although the dish is more widely known as “swimming Rama“. The “king” would be the pork, “swimming” in a “bath” — or better yet a “smothering” — of peanut-y goodness. Various forms of the dish can be found in several Asian countries, but it's not very common in Bangkok. 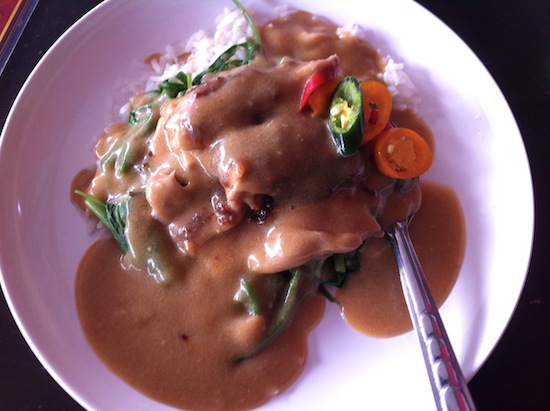 We’re talking a huge dollop of peanut/chilli/coconut “gravy” dumped onto thin slices of grilled pork over steamed morning glory and white rice (sen mee or thin, vermicelli size rice noodles are also available). It’s a simple dish to be sure, but every ingredient plays its part. The pork was tender and the rice and morning glory added substance.

Yet the real winner of this cast is the peanut sauce with a teaspoon of house chilli-garlic sauce plopped on top. Unlike so many peanut sauces we’ve tried in Thailand, this one is more savoury than sweet with pork fat and a touch of coconut milk and red chilli paste contributing to a flavour and consistency reminiscent of a mild red curry or even good old-fashioned gravy. The dish is drenched in the stuff and topped with a few chillies for some heat.

The result is a boneless, comforting dish that reminded us of a Southeast Asian edition of the turkey, gravy, long beans and mashed served up by Mum during the holidays. What could be better before or after a day of navigating Chatuchak?

Address: Next to Or Tor Kor Market, Chatuchak, Bangkok

Our top 10 places to eat and drink around Victory Monument

One of Bangkok's best

Ignore the decor, enjoy the food

Love it or hate it

If you're a little bit hipster