Phuket is Thailand’s most expensive province and if you limit your eating to the beach resort areas you’ll certainly be shelling out a premium price for food. But you can eat cheaply too — here’s a sampling of some of the best cheap eats in Phuket and where to find them. 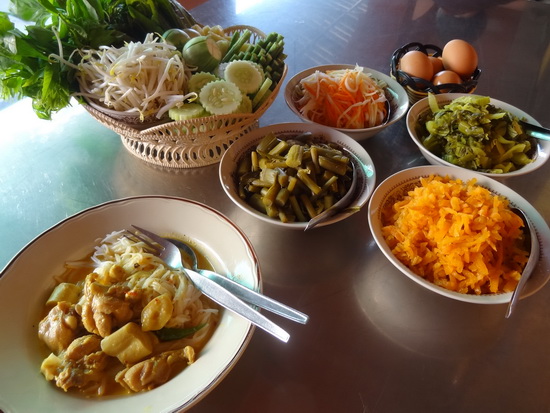 Get your fill of veg and spice with Phuket khanom jeen noodles.

By far the best variety and quality of budget fare is found in Phuket Town, where most of the street stalls and restaurants cater to picky, price-conscious locals.

A popular choice for breakfast across Phuket, khanom jeen noodles offers up a healthy start to the day. A bowl of thin rice noodles are slathered with a mild curry of beef, chicken, crab or fish, then on the table is a choice of raw vegetables, spices and herbs to add according to your preferred level of spiciness and crunchiness.

With baskets overflowing with super-fresh green veggies, NC Restaurant on Phang Nga Road opposite the Royal Phuket City Hotel is one of the best spots for khanom jeen. It also serves Hokkien noodles and bakery items, and at lunchtime its top floor indoor restaurant opens. For lunch, NC’s massaman curry is a must. Most backpackers will be familiar with the Thai banana pancake, but there are a number of shops around Phuket that serve roti pancakes in true local style. Yes, you can get your fried dough served sweet with banana, chocolate or condensed milk but most locals will go for the choice of beef or lamb curry for a more savoury meal with a bit of spice. Try Abdul’s or Aroon restaurants, both on Thalang Road in Phuket Town.

Like Penang and Singapore, Hokkien Chinese culture plays a role in the cuisine scene of Phuket. Hokkien noodles are found at several shops around the island, served either as a soup with thin slices of pork and shrimp and minced-pork dumplings or ‘dry’ as a stir-fry with pork and seafood. Ko Yoon noodle shop serves up big steaming bowls of the stuff at Yaowarat Road at the Suriyadet fountain circle – also a great spot to linger and watch the eclectic parade of travellers and market vendors passing by. Hokkien noodles: a hearty meal at a pauper’s price.

Some of the best dry noodles in town are found at Mee Ton Poe restaurant on Phuket Road at the clock tower circle opposite the Metropole hotel. Here, you can also grab some tasty satay chicken at a nearby stall for only five baht per skewer to complement your noodles.

Dim sum is another cheap dish that brings out a hungry crowd in Phuket, especially for breakfast. Little servings of steamed seafood, pork, egg and vegetables are charged by the bowl, usually for 10-15 baht per bowl. Though they’re often tasty enough on their own, there are bottles of spicy red sauce and soy provided to add some flavour. Small in size but big on taste: dim sum.

Phuket Town has several dim sum shops – just look for the giant metal steam pots or stacks of bamboo bowls at the front of the shop. One of our favourite dim sum diners is in Chalong: Jade restaurant on Chaofa East Road, opposite the police station. They also serve huge bowls of hearty khao thom – rice congee with minced pork or prawn.

Khao mun gai, or chicken rice, is a deceptively simple meal that’s served at several places but only a few serve it right. If you’re craving some khao mun gai in Phuket there’s only one place to go: Kota Khao Mun Gai on Soi Surin Montri, not far from Robinson’s department store.

The family-run restaurant has been around for some 50 years and it’s packed every day. We’re not sure what secret ingredients are used in the broth that the rice is cooked in, but they produce the most consistently flavourful rice we’ve ever tried. You can also order rice with crispy pork (moo krop) or red pork (moo daeng), or a combination of the three. Meals are served with a small bowl of clear soup and a plate of raw garlic, coriander, spring onions and chillies.

Our top 10 places to eat and drink around Phuket