Koh Thmei is part of Ream National Park but this hasn’t stopped the government from selling a substantial amount of the island to the highest bidder.

Right now the island is mostly empty; although a few families live on the island, there’s not so much as a village and the only current accommodation is the eight wooden bungalows that comprise Koh Thmei Resort. Their owners believe that they were allowed to open because of their eco-friendly policies; they power it by day using solar panels and have a complex natural water filtration system. You’ll occasionally find the local police drinking beers there who have a station round the corner — a 10-minute walk away along a narrow, long stretch of sandy and shell beach from the small resort.

A 99-year lease has been granted to one of the main property developers in Sihanoukville, a Malaysian firm, which plans to build a resort town on 2,000 hectares of the island and a bridge to the mainland. They’ve promised to protect at least 40% of the island but we’re not holding our breath. 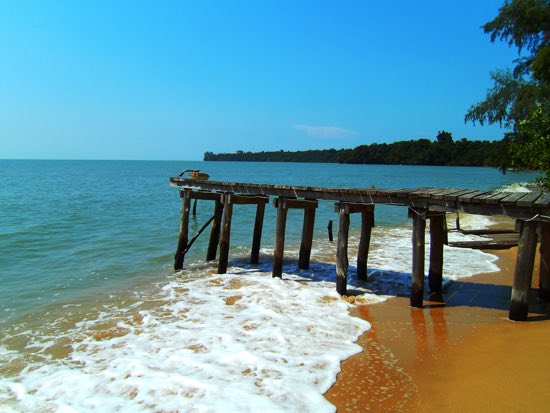 No white sand, but still pretty.

A week before our last trip here, in late 2014, the first inklings of action seemed to have taken place — though in Cambodia this doesn’t necessarily mean much more will happen for months, if not years. The diggers had moved in and cut down a stretch of forest to create a clearing for what may become a road and, in time, no doubt the resort that is the nightmare of most seekers of natural, deserted, tropical-island beauty. This is taking place at the other end of the island from Koh Thmei Resort, where you’ll be pleased to know you’ll only hear the lapping of waves.

Thus the island remains practically pristine. Flanked by mangrove forests, the island is a natural paradise that is as far from Sihanoukville as night is from day. Koh Thmei is the habitat of many types of interesting wildlife, particularly birds. Over 150 types of birds make their home in the park and a trip to the island offers ample bird-watching opportunities. To be fair, they seem to have their share of bugs as well. 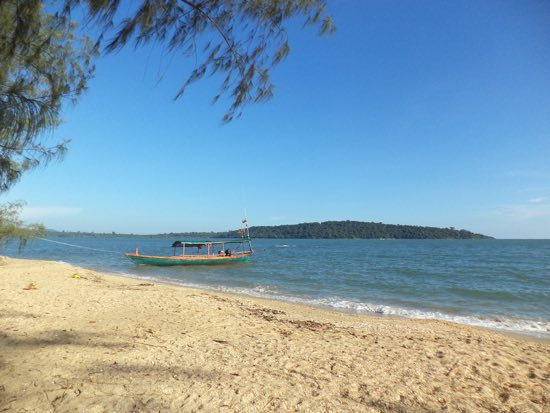 A lazy day and a boat. What more do you need?

The beaches are sandy — not as glowing yellow as others we’ve seen, with plenty of shells making more of a crunch than a squeak underfoot. A problem with almost all the islands we’ve visited in Cambodia — thanks to ocean currents — is that plenty of rubbish gets washed ashore. Based on the fact so much packaging is written in Vietnamese it seems a lot comes from there; Phu Quoc is spitting distance from Koh Thmei. Thankfully Koh Thmei Resort does a grand job of keeping its beaches litter free with daily tidy ups.

Snorkellers will be happy with the possibilities around the coral reefs and the beaches are piled with exotic seashells for those who don’t want to go underwater. Athletic types can kayak and when the weather’s right, even surf.
Phone service is accessible on the island through Metfone and Smart, but there is no WiFi.
Top of page

11 other destinations in Southern Cambodia

Drop off the map

To reach heaven one must pass through hell