The Malaysian island of Langkawi is a stunning jungle-clad getaway at the very bottom of the Andaman Sea on the west coast of Peninsular Malaysia. Nearly the size of Singapore, Langkawi is surrounded by beautiful beaches and towering limestone karsts. This beauty inspired their official 2012 tourism slogan, "Naturally Langkawi".

Browse hotels in Langkawi on Agoda

While Langkawi has a bit of a reputation as a resort island, this isn’t really all that warranted. While it does have big hotels, plenty of budget and midrange options mean your stay needn’t be all that expensive. Langkawi lacks the more raucous side of life that people may encounter on the Thai islands across the border to the north. This, along with its calm waters and safe swimming beaches, make Langkawi a great family destination in Southeast Asia.

The island’s rugged northern section is home to jungled peaks and beautiful mangroves, along with a host of lesser-known beaches. For the more adventurous willing to use their own transport, the island’s network of smooth, sealed roads offers ideal scope for exploring and daytrips.

Courtesy of its international airport, it attracts a diverse crowd of Western, Asian and Middle Eastern tourists. This has translated into a wealth of eating options across many different cuisines. Combine this with the island’s duty-free status, meaning it is one of the more affordable places in Malaysia to enjoy a cool alcoholic drink by the beach, and you’ve got a bit of a winning combination. While the beach areas have developed along moderately tourist lines, the interior of Langkawi remains more traditional, both in lifestyle and outlook.

Overall, Malaysia’s biggest holiday island has a lot to offer for both independent travellers and the pre-booked tour brigade. There’s more than enough to do here to keep you busy for a week or two, with pristine beaches, lakes and waterfalls to explore, and you’ll likely want to slot in some time chilling on your veranda in between. Pantai Tengorak with a dose of Tarutao in the distance.

Around the island
From a traveller’s point of view, Langkawi has the following primary points of interest: Kuah, the main port town, the beaches of Pantai Tengah, Cenang and Kok on the west coast and Pantai Datai and Tanjung Rhu on the north coast.

For many the welcoming mat to Langkawi, Kuah is home to much of the island’s residential development. In Malay, Kuah means gravy or curry, and it’s said that the town derived its name from an old folk tale where two giants fought during a family dispute over a pot of curry, which overturned on this very spot.

Yup, that’s Thailand in the distance.

Kuah is also the island’s administrative centre and is home to banks, medical clinics, dentists, optometrists, hardware stores, shopping malls, a multiplex cinema and the island’s Tourist Information Centre. Ferries dock at the Jetty Point Ferry Terminal, which houses immigration along with a large shopping and duty-free complex.

Twenty minutes by taxi to the west of Kuah are the island’s two best-known beaches, Pantai Cenang and Pantai Tengah. This is where you’ll find many of Langkawi’s guesthouses, hotels and resorts along with a hefty proportion of the island’s popular restaurants and bars. Pantai Cenang has a very fine, white/grey sand that swings between squeaky and hard-packed underfoot while Tengah has yellower, coarser sand. Pantai Kok – I was the only person here – really.

Both are popular for water sports, especially Cenang, with plenty of jet-skis, parasailing and banana boats on offer, but both still provide comfortable chill-out spots to relax and watch the sunset. Pantai Tengah, with its choice of more upscale restaurants and spas intermingled with local Thai/Malay restaurants, has a more bohemian feel than the hustle and bustle vibe of nearby Pantai Cenang.

The next beach of note, situated to the north of the airport, is Pantai Kok, which has fine sand and plenty of shade. The water is a bit murky here and can be a bit shallow at low tide, but other than a few yachts anchored offshore you’ll often find you have the place to yourself.

To the west of Pantai Kok, the road takes you by a couple of the island’s fancier resorts and on past Oriental Village and the Cable Car, ending at the popular Seven Wells Waterfalls. Located on the northwest corner of Langkawi, the high reaches of Gunung Mat Cincang fall steeply to the north coast and the Andaman Sea. As you travel up the Datai road, the valley falls behind as the road meets the coast.

If you strike north instead, take a left on Jalan Datai and you’ll arrive at Pantai Pasir Tengkorak (Skull Sand Beach). This popular local beach has a park-like setting with toilets, small chalets and outdoor tables. Further to the northwest you’ll reach Pantai Datai, which is home to the Andaman and Datai Resorts. While these two resorts allow limited access to the beach, foreign travellers shouldn’t have too much trouble strolling through. The Andaman has created a ’coral nursery’ on their grounds to grow baby coral to rebuild this particular reef that was heavily damaged by the tsunami of 2004. The resort offers coral ’walks’ at low tide and if your timing is right during your visit you can take the opportunity to participate in the reef maintenance activities, although it’s not free. Mangroves can be pretty too.

Take a right when you hit the north coast and you will travel past Pantai Pasit Hitam (Black Sand Beach) and striking north from the Pandang Lanang roundabout puts you at the sandy shores of Tanjung Rhu Beach.

This long and beautiful stretch of beach, with powdery white sand, is one of the most beautiful beaches on the island. You’d expect this to be one of the most developed spots on the island, but save two five-star resorts (who do restrict beach access), the beach is largely development free -- perhaps the views across to the cement refinery are not all that appealing.

Continue north along the peninsula and you’ll reach the Tanjung Rhu boat harbour; one of the embarkment points for mangrove tours. Beyond that, a few scattered beach restaurants can be found on the large expanse of white sand that borders the estuary near the boat harbour. 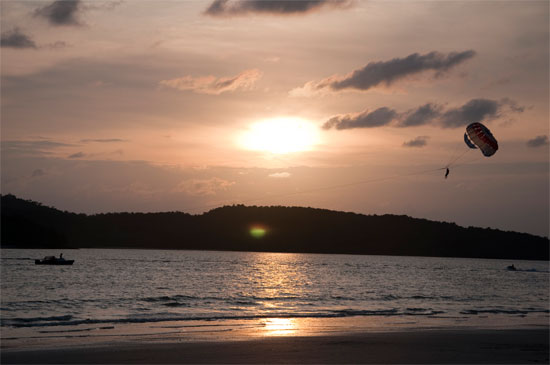 Where to stay on Langkawi
Although hotels have been developed on Langkawi for decades, it’s still mainly the beach areas and Kuah town where this is most noticeable. Slowly though, the interior is seeing its own new developments with small boutique resorts and guesthouses springing up at the base of the jungles and edges of paddy.

If you’re looking for the cheapest beds on Langkawi, Pantai Tengah should be your first port of call, while if you’re looking for more choice (both in lodging and food) Pantai Cenang is a better bet. The two beaches are only a 10-minute-walk apart, so it’s easy to switch from one to the other.

For the more upmarket travellers, Datai and Tanjung Rhu should be your starting point, though bear in mind both areas are quite isolated and a considerable drive from the action.

Weather
Langkawi’s ’dry’ season is also the ’tourist’ season -- it begins in late November to early December and continues through the end of March. The season is one of clear blue skies, light onshore winds and little or no precipitation. The temperature ranges from a low of 28 degrees to 32 degrees Celsius during the day. This is definitely the time of year for those visitors looking to soak up endless days of tropical sun.

April usually brings afternoon showers and the occasional storm that can push the daily temperature downward and keep the highs at or below 30 degrees. This is one of the best times of year to travel here for cooler temperatures without the rainy season deluge. The rainy season in Langkawi that starts in September can last well into November and in some years into the first part of December. Though contrary to common tourists’ sensibilities this is one of the more dynamic seasons on Langkawi. The temperature during this season can sometimes drop to a bone-chilling 24 degrees. The rains and, at times, heavy storms that mark this season are balanced with days of sunshine and cooler temperatures. For the visitor who is not looking for endless days on the beach under the tropical sun, this is a good time to visit the island as the weather pattern does put off many visitors and the island is far less crowded as a result.

Holiday travel
Malaysia has its own array of diverse holidays and during these times the number of domestic travellers to Langkawi spikes. Although new hotels are popping up at a rapid speed, the less expensive options fill up quickly, especially on holiday weekends. 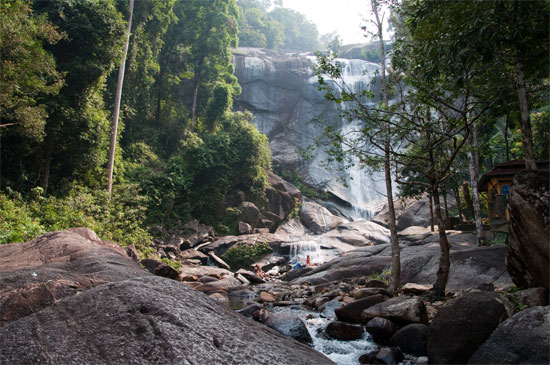 Ramadan is an annual fasting month observed by Muslims that occurs in the 9th month in accordance with the Muslim lunar calendar, dates varying on the Western calendar year to year. Although visitors may find many local restaurants closed throughout the day, there are still plenty of non-Muslim eateries open.

When fasting ends for the day, expect to see markets and stalls packed with local "break-fast" delicacies including fresh sugarcane juice. The big Ramadan Market in Kuah is held nightly throughout the month and is well worth fighting the hungry crowds to experience.
Top of page