There’s nowhere quite like Singapore in Southeast Asia. Yes, you’ll most likely spend more money here than, say, Bangkok or Saigon, but that’s partly because the fascinating, historical city offers just so much to see and do. Singapore is much more than a single sprawling air-con mall with good public transport and smooth footpaths. Plan and budget for more than an overnight trip here as part of your Southeast Asian journey and you’ll be well rewarded with incredible sights, delicious food and interesting places to stay.

Singapore can broadly be divided into a number of areas, each with its own character and points of interest for travellers. While the city is awash with malls, shoppers may be particularly attracted to Orchard Road, while those with an interest in museums and galleries will be better served by heading to the banks of the Singapore River and Raffles. Chinatown, Little India, Kampong Glam and Geylang each have their own fabulous eating scenes. Lovers of open spaces will be relieved to learn that no Southeast Asian capital has devoted as much of its downtown to parkland and catchment as Singapore. Sentosa, meanwhile, offers Singapore’s best beaches and more than 30 attractions packed onto a small island. Greater Singapore is also worth exploring, with world-class attractions such as Singapore Zoo and Night Safari as well as Jurong Bird Park. The more adventurous will be sated here too, with plenty of outdoorsy sights to see. Slow down and explore the amazing Gardens By The Sea.

All of this is extremely well interlinked via Singapore’s affordable and comfortable SMRT, but on offer as well is a great bus network plus plenty of taxis for when you’re heading to one of the few spots not within a 10-minute walk of an MRT station. There’s no city that is quite as easy to get around as Singapore.

Below we cover some of the main districts of interest to travellers, commencing in the backpacker and flashpacker favourite of Chinatown.

It may seem redundant to have a Chinatown in a predominantly Chinese city, but you’ll change your mind when you see it. Though Chinatown lies on the fringe of Singapore’s central business district, it feels a century apart. Here glass skyscrapers are shrunk to three-storey shophouses, people recharge with herbal teas instead of Starbucks, and life goes by at a slower, if perhaps noisier, pace. Though the signs are in English, the voices ring out in Cantonese and Mandarin dialects. 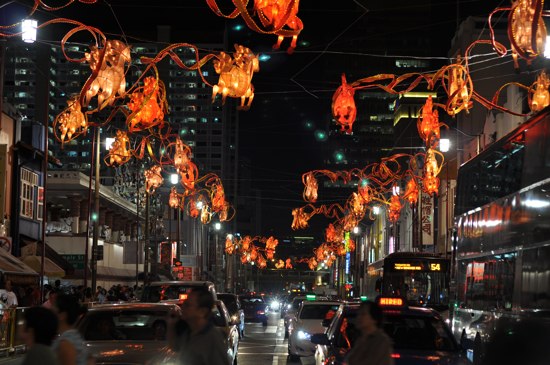 All decked out for Chinese New Year.

Long before Sir Stamford Raffles arrived and designated it a Chinese enclave, the area southwest of the Singapore River had been settled by merchants and farmers from China. As the influx of Chinese immigrants continued, the new arrivals started businesses, established trade guilds and built temples to thank the gods for their safe arrival in this new country. As Chinatown grew it became overcrowded with residents sleeping in shifts in the small living quarters above the shophouses and the flourishing of secret societies, opium dens and brothels. For a glimpse into the lives of these early immigrants visit the Chinese Heritage Centre.

Chinatown remained somewhat of a slum until the 1960s when the government began construction of high-rise Housing and Development Board (HDB) apartments and relocated thousands of residents. The least decrepit of the shophouses with their signature five-foot-wide covered passageways were declared conservation buildings and most of Chinatown underwent extensive urban renewal.

Today’s Chinatown has been sanitised and gentrified, but is no less chaotic. The Chinatown Street Market runs from morning to night and the narrow streets burst at the seams with herbal medicine shops, massage parlours, antiques dealers and souvenir shops selling fake silk cheongsams and Merlion magnets. The wet market in the basement of the Chinatown Complex sells produce so fresh it’s still flopping and the shophouses have been converted into everything from boutique hostels and guesthouses to architecture firms and artisan ice cream shops.

While many people come to Chinatown to worship at important religious sites like the Buddha Tooth Relic Temple or Hindu Sri Mariamman temple, even more come to eat. Chinatown is a food lover’s paradise with fabulous hawker fare at Maxwell Food Centre and shops selling delicacies from every region of China. Feast on kaya toast, dim sum, roasted duck, spicy hotpot and some of the city’s best vegetarian fare. After 18:00 Smith Street becomes "Food Street" with footpath food stalls and outdoor seating. 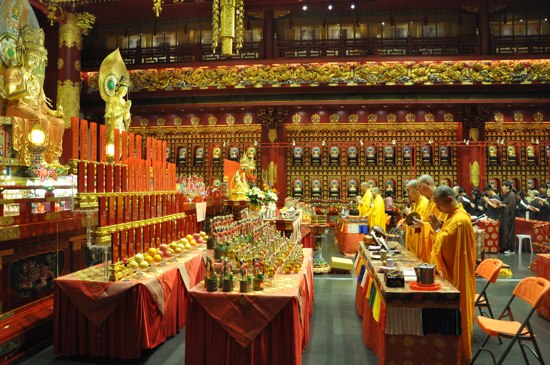 At the Buddha Tooth Relic Temple.

The core of Chinatown is the one-way streets, many of them pedestrianised, running between New Bridge and South Bridge Roads. The Chinatown Heritage Centre is in the middle of Pagoda Street, the Sri Mariamman Temple is at the end of Temple Street, and the Buddha Tooth Relic Temple is at the junction of Sago Street and South Bridge Road. The Chinatown Street Market runs between them along Trengganu Street and spills over into any extra space. East of South Bridge Road is Club Street and Ann Siang Hill which has been taken over by trendy boutiques, wine bars and European-style cafes. It can also be used as a shortcut to Telok Ayer Street, one of Chinatown’s oldest thoroughfares and site of century-old temples including Thian Hock Keng. To the southwest you’ll find heritage hotels along Keong Saik Road and Duxton Hill, a formerly seedy area that’s become the new hotspot for art galleries, specialty boutiques and buzzing restaurants.

Chinatown is always photogenic, but puts on an even more spectacular showing for Chinese New Year and the Mid-Autumn Festival. Keep an eye out for holiday markets, stage shows and dragon dances through the streets. The seventh lunar month, usually August or September, is Hungry Ghost Month with food offerings left on footpaths and paper money burnt at temples to appease angry spirits.

Best served by the Chinatown (NE4/DT19) SMRT station, the stations of Telok Ayer (DT18) to the east and Outram Park (EW16/NE3) to the southwest are also within walking distance. Walk north on New Bridge or South Bridge Roads and you’ll reach Singapore’s scenic Quays district, which serves as a buffer between Chinatown and the historic centre of the city, while heading east on Cross Street or Upper Pickering Street will take you to Singapore’s financial district, beyond which you’ll find Marina Bay.

Forget what you’ve seen downtown or along Orchard Road — this is genuine Singapore. In Geylang the shops sell more sandals than high heels, a hawker dish still costs S$3, and durian is not a dirty word. The area is largely residential so, with the exception of their arrival or departure from Changi airport, few visitors venture this far east. Depending on your perspective, East Singapore’s minor attractions like markets and parks are either a bore or a relief compared to the ultra-modern city centre. 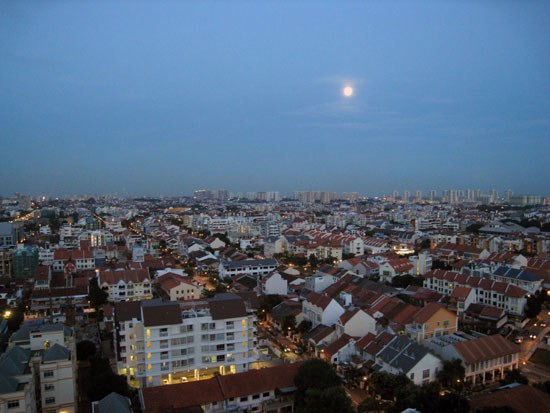 Rent a bike or take a really long walk at East Coast Park which stretches 15 kilometres along Singapore’s southeast coast all the way to the airport. Most people stay out of the water due to its questionable cleanliness, but that doesn’t stop people from picnicking on the beach or feasting on fresh, affordable seafood at the East Coast Lagoon Hawker Centre.

East Singapore is also home to colourful heritage neighbourhoods worth a visit for their architecture and food. Historically, Geylang was the designated area for Singapore’s ethnic Malay population and their presence remains with the Malay Cultural Village and Geylang Serai Wet Market. During the month of Ramadan the area comes alive with night bazaars selling curries and kueh (sweets) once the fasting hours are finished. In an odd mix, Geylang is also Singapore’s red light district, it’s pretty tame by southeast Asian standards though, and the Vietnamese food is great!

Katong was once the home of Singapore’s wealthy Peranakan merchants who built mansions along the coast. Due to land reclamation they no longer have sea views, but the beautiful terrace houses with elaborately embellished facades remain. Look for them around Joo Chiat Road. Katong is also known for its variation of laksa, a spicy seafood noodle soup.

If you don’t mind being a 15-minute MRT ride from the city centre, Eastern Singapore is home to good value hostels like Betelbox and Fern Loft.

The most convenient SMRT to Geylang is Paya Lebar (EW8/CC13) to the west or Eunos (EW7) to the east but it is a good 20-minute walk from either to Joo Chiat Road. 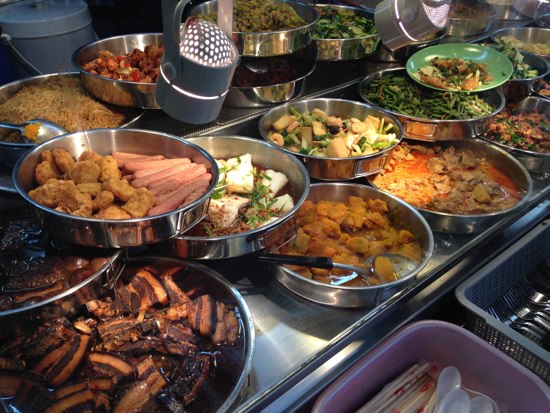 The main drawcards outside of downtown Singapore and Sentosa are the Singapore Zoo and Night Safari in the northern part of Singapore and Jurong Bird Park to the west. All three of these are absolutely world-class attractions and well worth the trip to the island’s outer limits.

Greater Singapore is also home to many lesser-known but worthwhile points of interest, many with an outdoorsy appeal. Early risers and bird-watchers should have Sungei Buloh Wetland Reserve on their shortlist, while those looking for a slice of Singapore in its natural state should check out MacRitchie Reservoir and Bukit Timah Nature Reserve, where monitor lizards and monkeys still roam free.

Last but not least, consider a visit to one of Singapore’s most unusual attractions, the stranger-than-words Haw Par Villa, or, if that’s not your thing, there’s always a tour of the Tiger Brewery complete with a tasting session.

Greater Singapore is largely residential and significantly less glamorous than downtown, and an excursion to a neighbourhood like Jurong West or Ang Mo Kio will give you greater insight into the life of average Singaporean than a day spent on Orchard Road.

A note on heading out into the Singapore "wilderness": Singapore is a very big small island. Don’t try to do too much in a day as you’ll just end up exhausted. Pace yourself and you’ll get far more out of your exploration.

The region is well served by the MRT system and public bus routes — an EZ-Link card will come in handy and pay for itself through discounts when transferring. To simplify getting to the zoo, there is a private shuttle service from central areas to the Zoo & Night Safari.

Just east of the city centre, Bugis and Kampong Glam is a neighbourhood with one foot in the past. The old and new are juxtaposed on every corner with business hotels beside street markets and the crowds on the footpaths and MRT as likely to be on their way to the mosque as they are to the mall. 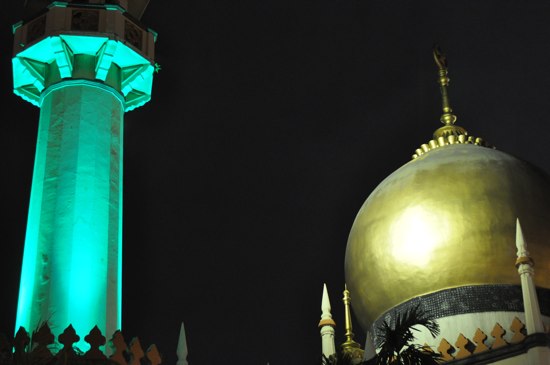 Bugis is named for the Bugis tribe, seafaring people from Indonesia reputed to have dabbled in piracy, who came to Singapore in the early 19th century to trade and established kampongs (villages) in this area. After the arrival of the British one of these settlements, Kampong Glam, was designated the home for wealthy Muslims, including Malay royalty and Arab merchants, who built the Istana Kampong Glam palace and Sultan Mosque, magnificent buildings that still stand today.

In the post-World War II era Bugis became a centre for an entirely different type of trade: sex work. Fuelled by sailors on shore leave, Bugis Street gained a reputation for sleaze with squalid bars, brothels and transsexual shows. The party didn’t last long: Old Bugis Street was razed in the mid-80s to make way for the new MRT, but its sordid history is immortalised by Paul Theroux’s novel
Top of page

0 other destinations in Central Region