The climate within Burma can vary considerably, so if you’ve got a particular destination you’re keen on visiting, it’s worth checking ahead to see how it’s affected by the seasons. What time of year is ideal to visit Bagan?

Bagan is smack bang in the centre of Burma’s best known microclimate, the famous (Ed: well, if you’re into weather) ‘dry zone’. This rain shadow region lying between the Shan Plateau to the east and the low coastal ranges to the west stretches south from Mandalay, taking in much of these central plains. On average, Bagan and Mandalay receive just 30 percent of Rangoon’s yearly rainfall total. Irrawaddy, Mandalay and Shan Plateau in the distance.

Bagan’s landscape can seem almost semi-desert, with acacias the predominant tree and cacti popping up between temples. It’s very dry and hot for much of the year, with little shade from the low scrub. At Bagan you’d be visiting temples, many of which are open to the elements, and possibly travelling around by bicycle, horse and buggy or even one of the new electric scooters now available there. Taken individually, the temples impress but what is truly spectacular are the overall views of the stupa dotted plain — so what do you need, weather-wise? Clear skies, without any dust or too much rain, temperatures that won’t nudge 40 degrees Celsius at midday and, because they’re going to spoil the atmosphere and ruin your temple photos, not too many other visitors. Dust and haze might on a good day look good for dawn. but by 08:00 you’ll be desperate for air-con.

For the months of February until May there’s a strong chance Bagan will be hot and dusty — though you would avoid the crowds.

For the coolest temperatures and cloud-free skies, November to January is your best bet, but bear in mind this is peak season. Not only are rooms going to be hard to find and more expensive, but Bagan will be heaving with crowds. 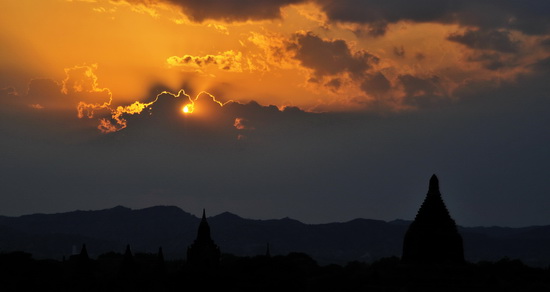 Some of the best known temples can get very crowded during high season, especially for sunrise and sunset visits since the number of stupas that you can actually climb up, thus getting a good view, is diminishing all the time. (Bit like the Phnom Bakheng syndrome at Angkor, with thousands of visitors stomping up and down the ancient brick steps every day causing damage.) Shwe San Daw, for example, is practically standing room only during a high season sundown. So that leaves the rainy season, which puts plenty of people off, but to our minds unnecessarily so. There are several major advantages to visiting during the monsoon. Firstly, you’ll snare low season rates with thinner crowds, and secondly you’ll have a much lusher, greener setting, and more spectacular skies for your vistas and photos. Rainy season usually sees occasional showers rather than non-stop downpours, so stop and have a bite to eat, and when the rain’s finished you’ll have the clearest, bluest, dust-free skies of the year. Rainy season at U Bein, with mountains not usually visible in dry season haze.

The heaviest rains fall in August and September, leaving the other low season months of May, June, July and October as good options. Yes, there’s always a risk with the monsoon — but we reckon it may well be worth it and increasingly so with the rapid rise in Burma’s popularity among travellers.

10 other destinations in Central Burma Myanmar

A town of many pagodas

You’re waiting for a bus or a train here