Enthusiastic travel agents will tell you there is never a bad time to visit Siem Reap. Which is sort of true, as long as you are flexible with how you spend your precious time once you get here. Ignore the climate stats at your peril or you could well find yourself unable to do the very things that made you want to come to Siem Reap in the first place. Let’s be honest – this is the kind of weather most of us are hoping for.

Cambodia sits slap bang in the tropics which means that the weather is warm to hot all year round and the main difference in the seasons is the amount of rain that falls. As a rule of thumb, Siem Reap is driest from November to March with hardly any rain falling in December and January, when day after day of cloudless blues skies is a regular occurrence — very handy for northern hemisphere-dwellers who need to escape the gloom of winter over that conveniently long Christmas and New Year holiday.

Being north of the equator — although only slightly — means that December and January are also officially winter and the coolest months of the year, bringing much relief to residents and visitors as night time temperatures can plummet to a positively chilly sub-20 degrees Celsius. Occasionally, day time highs won’t break through the 30 degree mark either. This makes it one of the best times of year for cycle rides, walking tours and visiting temples too as the heat is bearable for just that bit longer each day. Some people may disagree, but I would also rather watch the sun rise over Angkor in a clear sky than an overcast one. I’ll take a clear sky for that sunrise, every day of the week.

If you plan on visiting the floating villages or the stilt villages on the Tonle Sap, or the waterfalls at Kbal Spean or Kulen Mountain, this is also a good time of year as the lake and rivers are still relatively full following the rainy season, and generally speaking the countryside is still lush, and the paddy fields a vibrant shade of green.

Don’t be too worried though if you are about to set for off some winter sun and hear of Cambodia being in the grip of a cold snap as it was when I arrived in Siem Reap for the first time back in 2009. Yes we saw 17C at night and one day the temperature only reached 26C but it was bliss.

Such a pleasant winter climate does have its drawbacks, however. It is very much the high season, meaning hotel rates go up, tuk tuk drivers drive a much harder bargain, it can be difficult to find a decent room, and everywhere you go — from temples to restaurants — can be very crowded. Just make sure you book as much as possible in advance, get off the beaten track and find some of the quieter temples, and read up on anger management techniques for when things don’t go quite as you would wish. December and January are great for sunsets too.

From March onwards the mercury rises steadily with temperatures in April and May regularly nudging the 40 degree-mark and often not dropping much below 30 degrees at night. Any kind of physical activity – including temple visits — is best confined to early morning and late afternoon. On the plus side, April and May usually herald the start of the rainy season with spectacular and refreshing afternoon and evening storms that cool down the humans, wash away the dust and cause everything to burst into bloom. 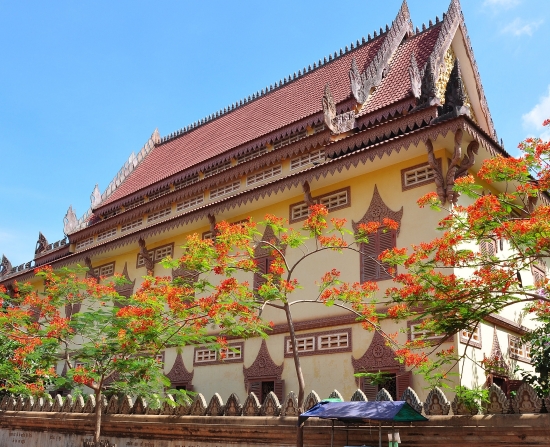 Such is the popularity of Angkor these days, however, that despite the heat there is no longer a notable drop in visitors in April and May, which can put a strain on the electricity grid as thousands of air conditioning units work overtime. If you do visit at this time of year and aren’t a fan of the heat, be sure to book into a hotel not only with air-con but also with a generator so you don’t end up melting in the dark should there be a power cut.

From June onwards the temperature starts to drop but the rains become more frequent. There are rarely days when it rains for more than an hour or two and is very unusual for the sun not to show its face at all. The impressive torrential downpours tend to come in the afternoons leaving much of the day free for visiting the temples and other outdoor activities. The rain can be very intense — Siem Reap receives on average as much rain in August, September and October as London does in an entire year — and occasionally flash floods do occur. Usually they are not too serious, and certainly not serious enough prevent tuk tuks from ploughing on regardless through the town’ soggy streets. 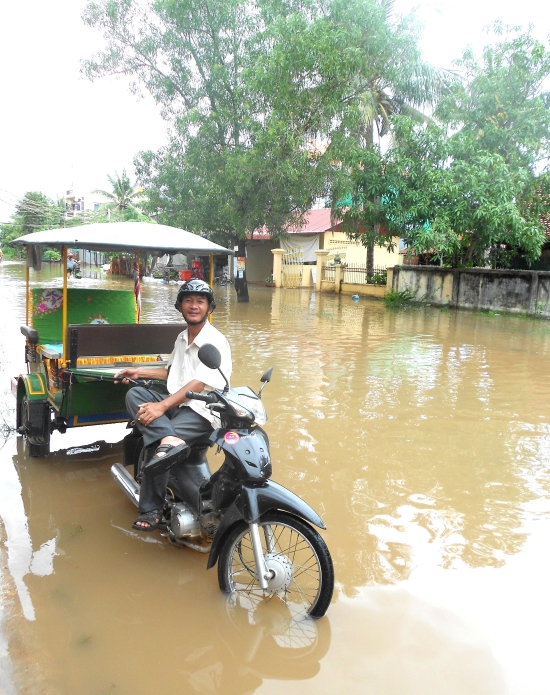 Your tuk tuk driver won’t let a little thing like a flood put him off.

You do need to be careful walking through flood waters, however, as you can’t see what is lurking beneath — as a friend of mine discovered last rainy season when he tripped into a submerged hole on Pub Street and broke his leg. 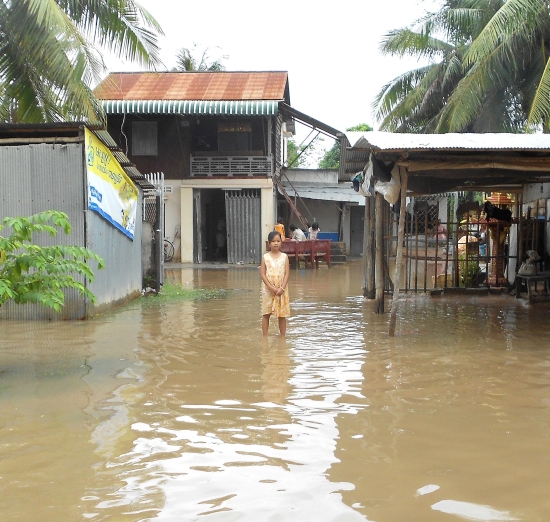 I hope she knows what’s lurking under that water.

As with pretty much anywhere, weather patterns in Siem Reap are not as reliable as they used to be. All you can really be sure of is that it will almost definitely be hot when you visit, and if you come between April and October, you stand a good chance of seeing storms so spectacular that you’ll probably be glad you didn’t follow the crowd and wait until December.