Will the harvest be good? Will the worm turn? This important knowledge can be obtained during the Pasola ceremonies, which take place each year in February and March in West Sumba. Pasola is a ritualised horseback, jousting war between villages. The intention is to spill blood to fertilise the land, appeasing the Marapu gods and ensure a good harvest. There are no winners and seemingly few rules.

The festival draws huge local crowds and increasing tourist numbers. It’s a little hard to plan a visit because the exact dates are only announced a few weeks beforehand. The annual event takes place in the Kodi, Lamboya and Wanokaka areas of West Sumba, approximately six to 14 days after the full moons in February and March. If you are flexible, you could plan to be in Sumba for a few weeks around this time. We visited the Pasola in Wainyapu, Kodi, arranging with a local guide to spend the night in the village for the full experience. The air was thick with tension and anticipation on our arrival the day before the event. This was the last Pasola for the season. Crowds had already gathered and many of the homes had opened their doors for visitors (mainly relatives). Makeshift snack stalls were set up around the adjoining Pasola field.

There were two other foreign tourists staying in the house with us, along with about 100 locals. Most people were milling around, drinking coffee, and chewing betelnut. In the afternoon things began to stir. Several of the local horsemen who would ride in the Pasola entered the village, dressed in traditional costume on decorated horses, and began revving up the crowds. This didn’t take much as everyone, including us, was already quite excited. It was very showy as they romped among the graves of the ancestors. 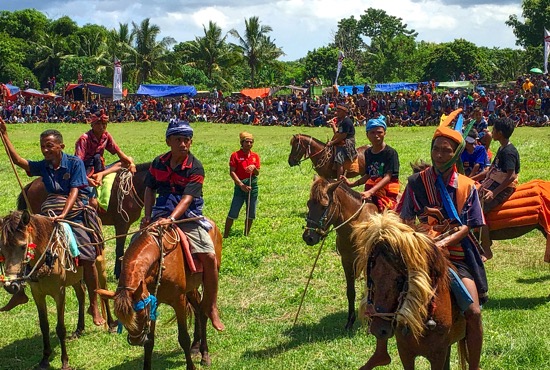 The next event was more subdued and solemn, as the married women of the village slowly walked from grave to grave placing betelnut offerings on the tombs. This continued into the evening when women and children then lit the graves with candles. Ritual chanting and singing continued late into the night, calling the nyale worms to appear. Nyale are a species of sea-worm. The moon in February and March provokes their once a year reproductive cycle when the tail end breaks off and wriggles to the surface. When they appear, a chicken can be sacrificed and the Pasola can begin. 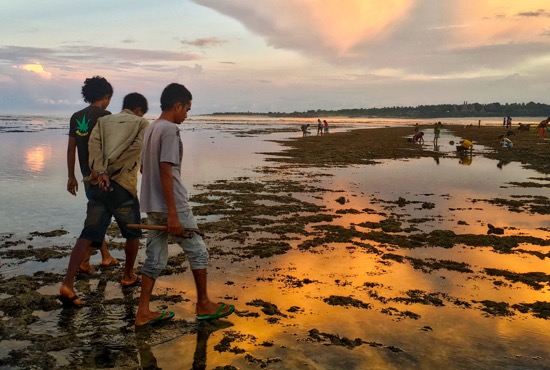 Early the next morning, we joined the pre-dawn beach search for the nyale. Everyone was a little nervous. Conditions were not looking good. The sun was rising and still the worms were elusive. The mood lifted as a small handful of worms made their appearance. The nondescript looking creatures, a delicacy in these parts, were collected and would later be eaten. Waiting for the main event.

We returned to the village to squeals of pigs being sacrificed. Raw and brutal, they are stabbed and blood slowly bubbled to the earth. The carcasses were dragged to the fire. As flames burned off the coarse hair, a group of children gathered to watch. Returning to the house for breakfast, the slaughter continued outside with a dog and several pigs dissected. Just rice today, thank you very much.

Mid-morning, the news was that the Pasola was due to start. We headed to the field, which by now was surrounded by thousands of onlookers. Spying a shaded pavilion across the field that seemed empty, we made our way around the crowds. We’d been warned to be very careful of pickpockets and planned an escape if tensions got too high. Pasola can easily and quickly escalate into violence, and not just on the field. The previous day’s event, which one of the other tourists staying at the house had witnessed, ended in the police throwing tear gas into the crowd. 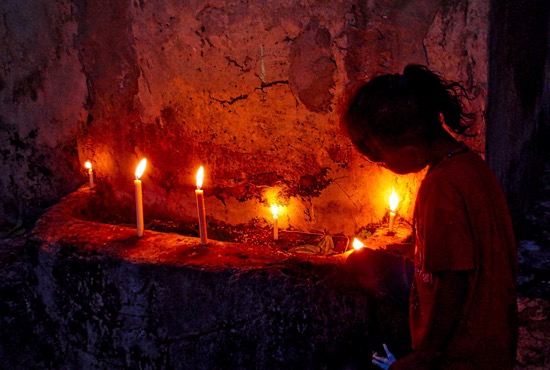 Offerings for those past.

The all but empty pavilion was surrounded by army and police, who made way for us to sit. We soon understood the police presence as busloads of local dignitaries arrived and took their place in the shade. Luckily we weren’t moved along.

The teams gathered as speeches were made. We recognised several of the riders from “our house”. They then divided to either side of the field. We had a prime position, the field before us, and the rooftops of the village visible behind the crowds in front. A thunder of hooves, shouts from the crowds and spears began to fly. 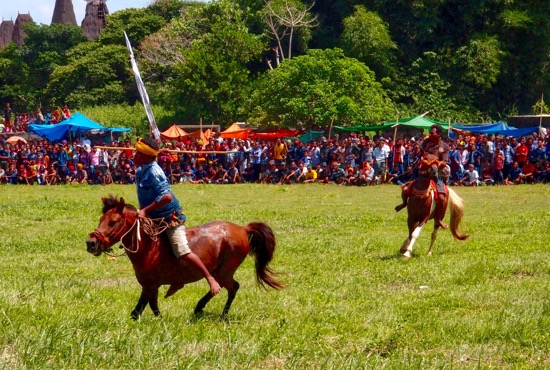 The event continued for several hours, and we still couldn’t make out the rules, if there were any. Suddenly the energy changed and everyone ran onto the filed. The army and police moved in to bring calm, and the Pasola was over. The horsemen gathered in front of the pavilion for more speeches. A beauty queen appeared. The local dignitaries rubbed noses with the riders. And very quickly the field was clear. Blood was spilled, the gods appeased. 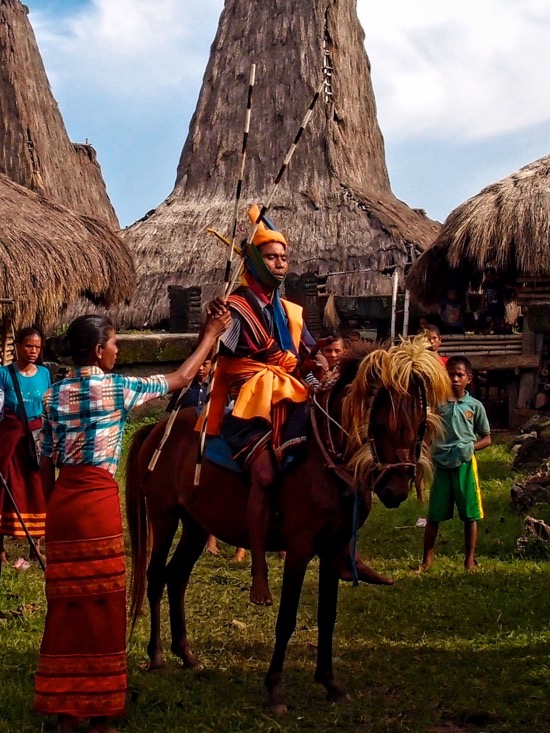 You can just turn up at any Pasola (when you know the dates), but we strongly recommend hiring a local guide for more insight, particularly if you can arrange a village stay. Yuliana Leda Tara helped us with Pasola arrangements. She speaks English and French. Her rates are 500,000 rupiah per day (excluding transport). T: (0812) 361 3224; (0822) 3621 6297; yuli.sumba@gmail.com.

6 other destinations in East Nusa Tenggara

Drop off the map.

A volcano and a beach