Sundown in Bangkok is a frenzied time. Taxis and buses struggle through clogged streets; the sky train and subway are overrun. Food vendors come out in force as the sun sinks over the Chao Phraya River, out of sight for most. These shots capture just some of the many different moods that Bangkok assumes as the sun goes down at rush hour. As you can see above, a mid January sun can paint the urban sky a sizzling orange. On the other side of the calendar in June, stark white clouds often conceal the sun and provide cooler days, usually with a passing shower or two. It’s still hot, but once you’ve grown used to 35 degrees, 30 without much sun is a lot more comfortable. 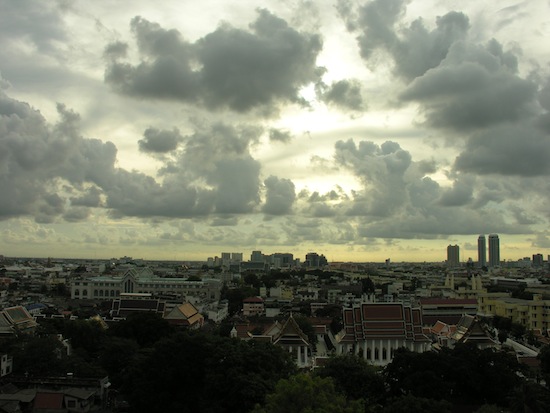 Big June clouds over Banglamphu, as seen from Wat Saket.

The March hot season ushers in a fiercely heavy sun. It can cause serious sunburn even late in the day; don’t forget to pack your sunscreen. A big March sun sets over the gates of the Grand Palace.

As the monsoon meets with dryer air in October, clouds often swirl in sublime shapes over the city. As seen here from the riverbank in south Thonburi, it can look like a scene out of the Jetsons. 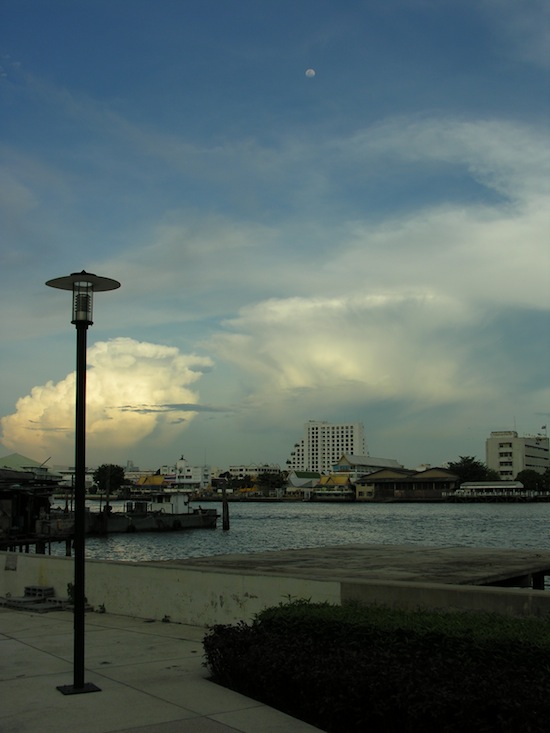 Though the cooler temperatures stick around in July and August, higher humidity and fiercer storms are an almost daily occurrence, especially around sundown. We didn’t feel altogether safe while snapping this shot of stormy skies over Wat Arun from a packed rush hour express boat. 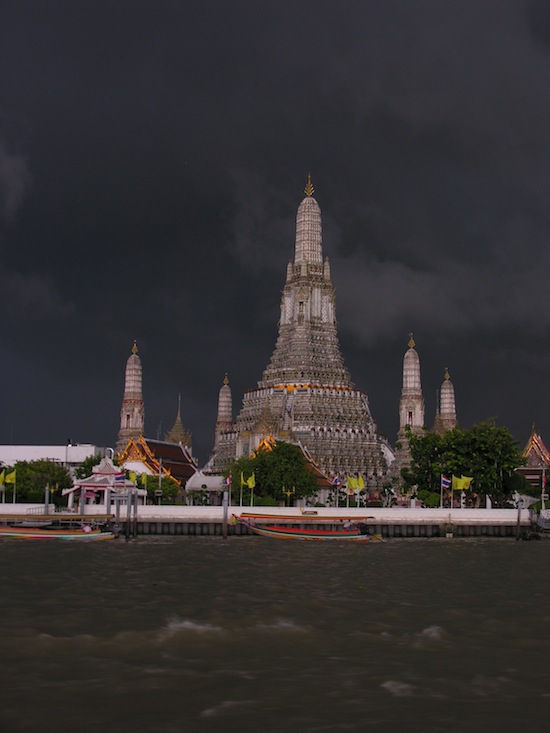 Wat Arun has stood through a few storms in its day.

Even in September, though, it never rains all day. The swan boats set sail year-round at Lumpini Park. A few clouds don’t scare off the swan-boaters.

In April, the hot sun can be felt even hours after it sets. After sundown at any time of year, parts of the city morph into seething worlds of nightlife. In the heart of the city, sunsets are often seen as nothing more than rays piercing into otherwise dark and cramped alleys. Straight through sunset and into the evening, the push cart drivers in Chinatown work hard. What sundown is like in much of the city.

Sometimes the Bangkok sunset surprises as it peeks through cracks in the cityscape, as below. Like much of the world, December is a festive month in Thailand. Loy Krathong leads straight into the King’s birthday festivities, and New Years is also an official Thai holiday. But much of December’s allure is in its fabulous weather. Dry and not too hot, it’s the perfect time for sundowners over the Gulf. In May, the weather often can’t make up its mind. Is it hot season or rainy season? As it turns out, sometimes it’s both. 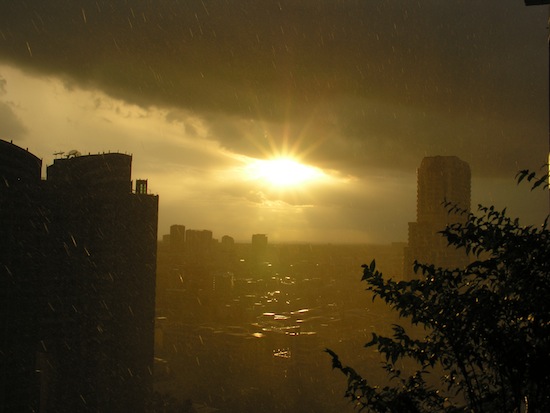 Again looking southwest towards the ‘burbs.

Despite the rainy season, we think July is a good month to visit Thailand. The tropical monsoon creates some spectacular sights in the sky, such as this rainbow over the Sathorn business district. It appears the pot of gold is on Charoen Krung Soi 62.

In February, Bangkok residents enjoy one last month of relatively cool, sunny weather. Every year at this time, a big kite-flying party takes place each day at dusk at Sanam Luang near the Grand Palace. Lovely way to spend a sunset.

When September ushers in the worst of the rainy season, the atmosphere around Bangkok can get a bit tense. Hard rain falls daily and people begin to wonder, “Will floods hit again this year?” At this time, parts of Bangkok can look more like Prague in late autumn, as seen in this shot taken from a boat on the Chao Phraya, looking north to Memorial Bridge. Other times, sundown in Bangkok is nothing more than dim white sky yielding to dim grey sky. In this photo below on one such evening, a statue of King Vajiravudh (Rama VI) gazes towards Silom and Sala Daeng BTS station. If the King were alive, he’d find that his father’s vision of a modernised and sivilai (civilised) Thailand has been realised. Marvelling at his peoples’ creation.

Of course, Bangkok’s many skyscrapers allow you to enjoy sunsets from the comfort of a rooftop bar any day of the week. From our 25th floor Thonburi perch, we viewed Asiatique’s new ferris wheel beneath an angelic December sky. Asiatique’s Dutch-made ferris wheel is one of Bangkok’s newest landmarks.

When it comes to weather, Bangkok is an interesting place — if not a magical one. During dry season, spectacular sunsets are commonplace. In the rainy months, dramatic storms and sinister clouds add a sense of mystery and adventure. But if we were forced to pick one month to visit Thailand, it’s January. At this time, there’s nothing like cruising the old city streets at dusk. 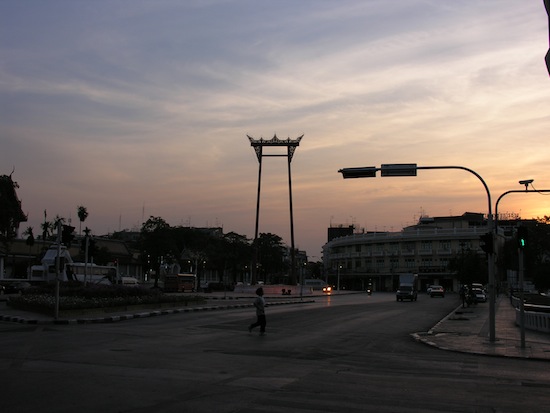 Getting drowsy at the Giant Swing.