Bangkok scams are rampant. A while back we featured a story on scams throughout Thailand, but The Big Mango deserves some special attention. Now you might fancy yourself a savvy traveller, but these scammers are skilled. 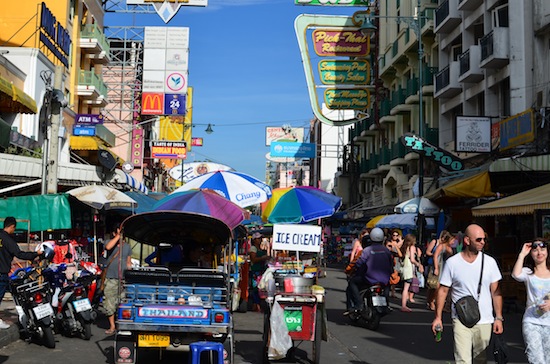 Khao San Road is known for scammers, but they can pop up anywhere.

In fact, let’s start off with a story. A young lady, let’s just call her Melena, was with a pal exploring a touristy area of the city. She was carrying a bag with the name and logo of the university she had attended. Suddenly an eloquent and well spoken Thai man came up to her. “Oh did you go to university there? So did my brother!” Conversation ensued, eloquent man had a tip for a great shop with specialty goods, he was going to just call his buddy over to point out the right direction. SCAM! A good scam, but a scam. Let’s break ‘em down.

The shopper’s helper
We’ll use this title to refer to the above scam. There is a man. He has nice clothes and speaks excellent English. Sometimes he’s old and seems so sweet and innocent. He dispenses advice like a fountain and knows an amazing shop run by his cousin. You should go — sometimes for gems, sometimes for clothing … always a scam. If it seems to good to be true, it is.

What happens if you take the nice man’s advice? More often than not nothing terribly harmful. You will be taken to a gem shop that you don’t feel like going to and it will be annoying. Sometimes, however, you will be pressured into buying some of those bogus gems for quite a price, and that nice, well-dressed man will then get a kick-back. Moral is, be suspicious. If the kind stranger has shopping advice, tell him you already have plans.

Sorry it’s closed
“Miss! The temple is closed! Buddhist holiday!” We’ll save you some time right now and tell you that the temple is not closed. In fact, the temple is rarely closed. Particularly when visiting sites like Wat Phra Kaew, Wat Pho and Jim Thompson’s House, you will be met along the way by seemingly helpful men who tell you the site is closed. The reasons will be something like: “they’re cleaning”, “it’s lunchtime” or “there’s a ceremony.” Lies. All lies. 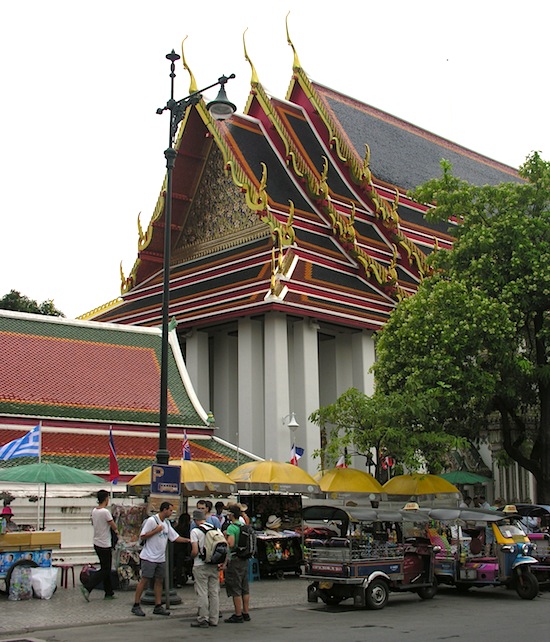 These men will then suggest another activity: probably a tuk tuk ride to Chinatown, which is always open of course, where you’ll be brought to check out gems, gold, souvenirs and more. The less sinister version is when tuk tuk drivers tell you that the attraction is closed in the hopes of taking you on a day tour for a normal price.

The taxi or tuk tuk rouse
“10 baht, anywhere in the city!” Sound too good to be true? It is. Tuk tuk drivers offering this price and this service are 100% scamming you. You will not go anywhere in the city but a tailor or gem shop. If that’s fine with you, then hop in! Just know that by doing so you are relinquishing control of your day. Taxis and tuk tuks that sit on Khao San are just waiting to pounce.

This scam is most common with tuk tuks, especially those that hang out on Khao San Road and in front of major attractions, but it does happen with taxis as well. More commonly — extremely common, in fact — is when taxi drivers quote you a fixed rate that’s often five times the price of the normal metered fare. If you tell the driver where you want to go and he comes back with a flat rate, shut the door and find another. Meter is the law and he knows it.

Just feeding the birds
This one used to be commonplace at Sanam Luang, the great grassy expanse that fronts the Grand Palace, though the ever-vigilant tourist police seem to have cut down on it. It starts with an unassuming man tossing breadcrumbs out of a bag to feed the pigeons. He walks over and places the bag in your hands. “Go ahead,” he says with a smile, “you can feed them too!” 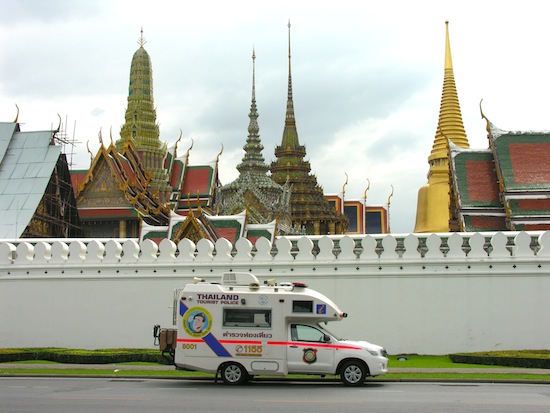 Think you’re getting scammed? Call the tourist police at 1155 and they might come to the rescue in one of these super-intimidating vehicles.

Once you’ve thrown a few morsels, he will put on a straight face and say, “Okay, 200 baht.” When you give him a confused look, he’ll start getting pushy, maybe even start making a scene, while insisting that you have purchased a 200-baht bag of bird food from him. He’ll refuse to take the bag back. Crazy as it is, many tourists shell out the cash to avoid a confrontation. Avoid it altogether by not taking the offer in the first place.

Want to play cards?
This is one that we still have a hard time accepting people fall for. But just in case, here it is. A man asks you to go back to his home to play cards. Are you going to go? Did your mother ever tell you not to talk to strangers? Apparently some folks do go and once there they are thrust into a high stakes poker game that involves their money being systematically stolen from them. In sum don’t go to a stranger’s house, particularly when the reason is poker. 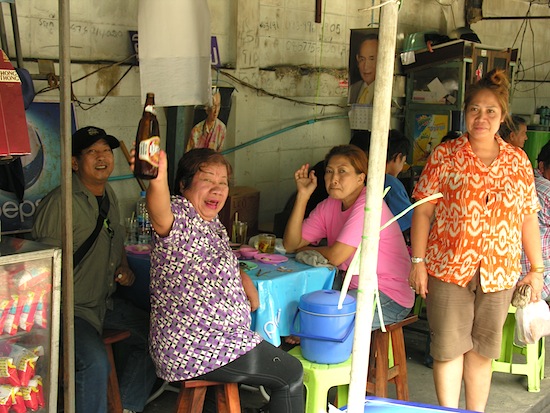 Most Thais are genuinely friendly and kind; don’t treat them all like scammers.

Keep in mind that all of these scammers are generally not harmful so long as you don’t take the bate, and even if you do, it’s usually only your wallet that will take a beating. They’re not going to pull out a gun and force you into a tuk tuk. Always keep an easygoing attitude and avoid getting aggressive at all cost. Being too guarded and thinking that every local is a scammer is a recipe for a not-so-enjoyable trip. Keep your wits about you and all will be fine!