Don’t be fooled by the fact Hanoi is in Southeast Asia and think shorts and T-shirts are good to go all year round. Hanoi has four seasons, and as the city’s in the northern hemisphere, that means the chilly winter starts in December and steaming summer hovers around July and August. It’s impossible to give firm predictions of the Hanoi weather each month, or even each season, as temperatures, rainfall and sunshine can change from day to day — and often do. But we can offer some general suggestions. Now that’s when you want to be in Hanoi.

Let’s start with the coldest time of year. Temperatures from December to around February can drop to a cold (yes, really, it is cold) 10 degrees Celsius and reach an almost balmy 20 degrees Celsius. Ten degrees in Hanoi is a lot colder than you might expect: the humidity, wind chill factor and lack of building insulation and heating can make it feel much chillier. But that doesn’t mean it’s necessarily a bad time to come, as humidity is lower than at other times of year, rainfall is lower and skies are often bright blue — plus you might hit a 20-degree day, and that’s a great temperature for exploring the sights of the city on foot. It’s also Tet time, a pretty and quiet time of year to be in the city (though do bear these points in mind). 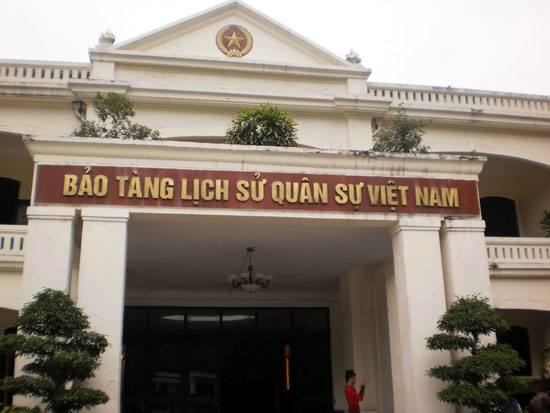 Warm up in a museum or two.

And if it is cold, don’t despair: all that sightseeing will keep you warm, numerous museums are worth a visit, and, if you’ve had enough of all that, the cold gives you an excuse to huddle up with a coffee and a good book somewhere.

April and May are generally great months to be in Hanoi weatherwise. The temperatures are consistently above 20 degrees Celsius but it’s not yet reached the roasting temperatures of full-on summer. Skies are often clear and rainfall is starting to increase but is intermittent. Bear in mind though that whereas often rain in Asia is characterised as a short but heavy downpour, rain in Hanoi is often drizzle, so be prepared for grey days and bring an umbrella. That’s rare though and generally this is the time of year when you can sit in a cafe with a view enjoying a coffee or beer without dripping with sweat. 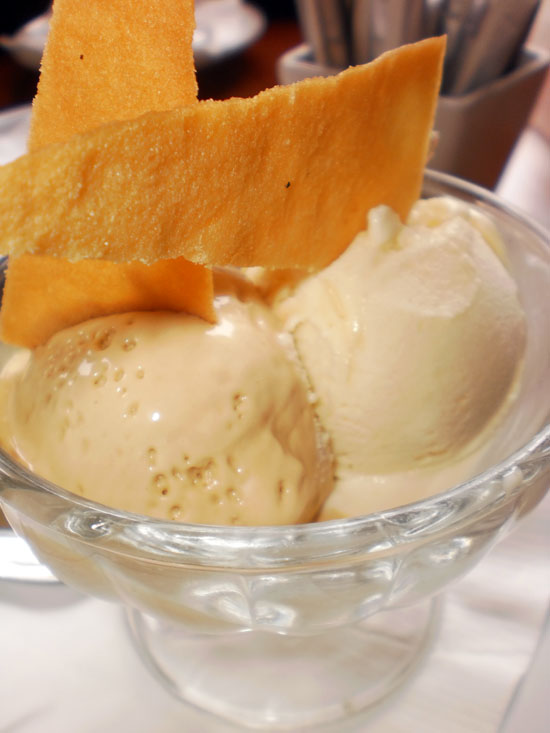 Any time is ice cream time — you just might have to wrap up warm for it.

After that it gets hot. June, July and August are the hottest months, with temperatures known to reach 40 degrees Celsius, though the average temperature is in the early 30s. That’s still plenty hot enough, especially when combined with the high humidity. At this time of year, it’s hotter than in the south of the country, where temperatures remain far more stable than in Hanoi. The heat makes doing anything a chore; as soon as you step out of the air-con you’ll want to get back into the shower. So you just have to accept the sweat, grab a big bottle of water and go for it. Or give up on the exploring and plan a swimming pool visit into your day.

It’s also officially rainy season, and that means regular downpours. These can last anything from 30 minutes up and usually occur at the most inconvenient times — whenever that is. Carry a raincoat with you — although if you get stuck, enterprising stallholders tend to whip out their raincoat rack as soon as the sky turns grey. Note that taxis can be hard to come by when it rains. Walking isn’t much fun in a torrential downpour, particularly as many of the streets in Hanoi are prone to flooding. But that’s another excuse to sit and do nothing but eat and drink for a while. 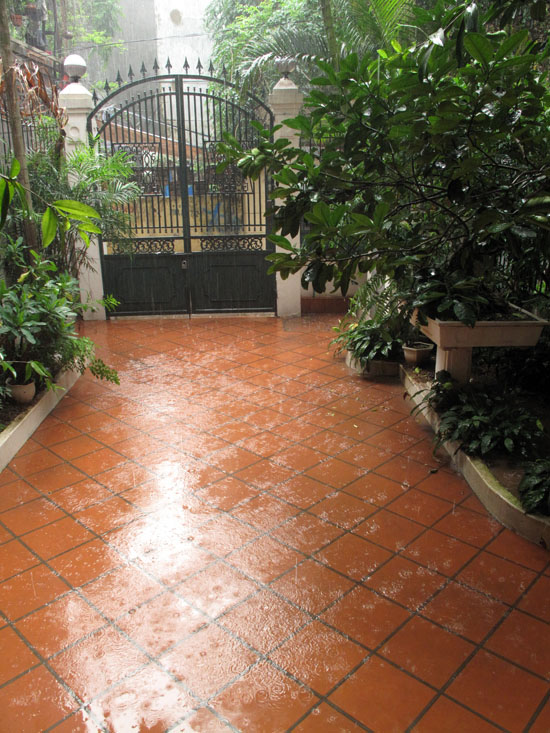 Another cup of coffee then.

Temperatures drop slightly in September, but it’s October we pray for, when the temperatures start to decrease and it becomes bearable to set foot outside again. October and November are similar to March and April in terms of both temperature and rainfall, although we were caught out last year with a particularly chilly and damp spell at the end of November, when the year before it was roasting.

A couple of final notes. The weather forecast that you check online is not always accurate: for example, the BBC forecast has shown it’s been raining in Hanoi for the past two weeks. It hasn’t. Even if the forecast shows a thunderstorm (and it’s accurate!), it’s not likely to last long, or will occur overnight. Storms can be cool to watch if you get a good vantage point (we suggest overlooking a lake). 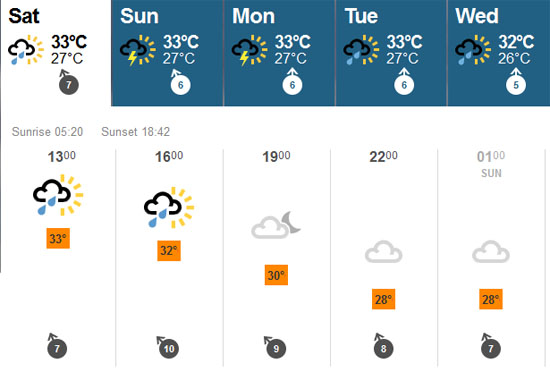 Also, Hanoi is still prone to the tail edge of typhoons that race through the Gulf. At the end of June this year we had two solid days of heavy rain because of this — it’s unpredictable and there’s very little you can do when it rains that hard for that long. It’s unusual, but don’t say I didn’t warn you!

In summary: there really is no bad time to visit Hanoi. Be warned that the cold months can be a bit depressing, and if you hate the heat, don’t come in June through to August. Other than that, pack and plan appropriately and don’t let the weather spoil your visit.