The vast cave temple complex at Po Win Daung is home to shallow niches scratched out of the sandstone by hand that sprawl on and on, seemingly endlessly. A kilometre or further is the even more stunning Shwe Ba Taung, which some have taken to calling Burma's Petra, but we think of it as more of a Burmese take on Ethiopia’s Lalibela. Both lie across the Chindwin River to the west of Monywa town.

Po Win Daung has literally hundreds -- our guide reckoned 900 -- small temples and shrines dotting its scrub-covered hillsides, culminating in stupas and temples along the ridge line. It’s all appreciably low-key, unrestored and free of tourist coaches.

The site is thought to have been conceived in the 14th century, though cave temple construction went on until quite recently. The majority seem to be post Bagan, 14th to 17th centuries, while most of the fading interior murals are reckoned to be 17th or 18th centuries. Footpaths and stone staircases link one to another so you could spend a lot of time here.

We hired a local guide and were very grateful we did. Locals will propose their services as you arrive in the carpark. Our guide spoke excellent English and was well informed and enthusiastic. We agreed on a 3,000 kyat rate for an hour's tour. Another big advantage to hiring a guide is that they’ll also help fight off the hordes of pesky macaques that infest the area.

Many temple interiors contain murals and some interesting Buddha figures, so having someone show you around and point them out is sensible. Some have been carved out of natural low cliffs or boulders while others are reached through hacked out passageways, Shwe Ba Taung-style. Again this is all sandstone and the hill contains no natural caves.

Meanwhile nearby Shwe Ba Taung is regrettably overlooked by many visitors (or lazy tuk tuk drivers) though to our mind it's even more stunning. This was originally a flat sandstone outcrop and deep, narrow pathways have been hacked out of the rock. The vertical sides have then been carved out again to create rows of temples on both sides. This entire labyrinth of temple and shrine-lined rock passageways has been hacked out of the solid rock by hand. Even the shrines’ Buddha images are carved and detached from the interior rock faces.

The temple facades are the usual pastel shades but to call it kitsch would be missing the point. This is not limestone and we repeat -- it is all carved by hand. The passages are between five and 10 metres deep, broken up by staircases and small open courts. The far side from the entrance opens onto a partly natural terrace – the original cliffside – which affords great views across the countryside.

The 50 or so temples – some are unfinished – date from the end of the 19th to middle of the 20th century. British colonists joined in the caving fun at Po Win Taung -- you’ll see British imperial emblems over some temple doorways -- and this may have been the case with the incredible Shwe Ba Taung creation too, as some temples seem to bear a Middle Eastern, north African feel. You can almost imagine a keen officer arriving from his previous Abyssinian or Trans-Jordanian posting thinking, ‘Oh this looks like fun – can I join in?’ We were informed British assistance and finance was to reward the locals for help during the last war, though since we saw dates from the 1920s and 30s this doesn’t make sense and it would probably have been too late to reward help during World War 1.

Plenty of snack, noodle and tea shops surround the entrance to the cave temples. The route passes some great scenery though does skirt round the vast open-cast copper mine too. This may be a better afternoon option, with perhaps Bodhi Tataung in the morning, in which case you could get your driver to drop you off for a late afternoon cold one at Pleasant Island on the way back.

It is a bit further than the eastern sites. We made it around 35 kilometres one way via the new bridge to the north of town. Apparently you can also take a boat across the Chindwin from Monywa’s waterfront jetty and hire a tuk tuk or taxi on the opposite bank's carpark. This shaves off nearly 10 kilometres each way, but you’re obliged to rent a private boat for 5,000 kyat and when we tried they weren’t letting foreigners cross due to swollen river conditions. (The current was so strong that boats were actually crossing sideways.) We found a well powered tuk tuk that took less than an hour to reach the temples the long way round.

We paid 25,000 return, which seemed fair enough for a 70-kilometre round trip plus waiting time. Taxis were 40,000-ish. If you do take a boat, then the shorter route can be done for 25,000 rupiah. Do make sure that the driver stops at both Po Win Taung and Shwe Ba Taung. Entrance fees were $2 or 2,500 kyat at each site, which was certainly the best $4 we’d spent in a long time.

Our top 3 other sights and activities in and around Monywa 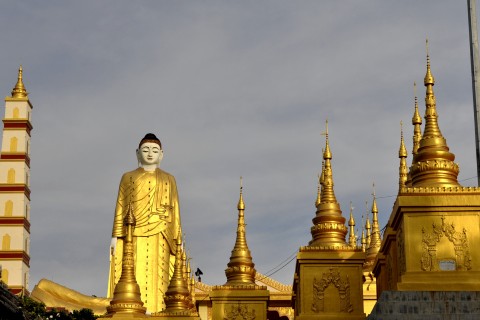 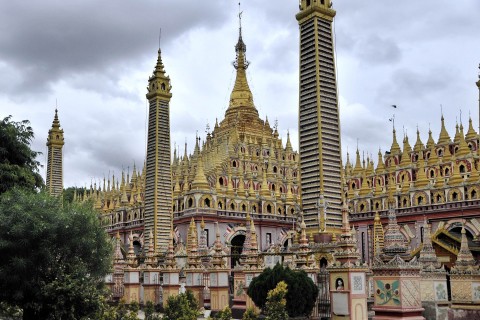 Home to more than half a million Buddha images