A gateway to the north, Kratie is a charming, pleasant city to pass a couple of days. It’s most famous for its dolphins, but there are plenty of other diversions.

Kratie, officially the best spot for sunsets on the Mekong.

A few years ago, the well-intentioned Mekong Discovery Trail produced a series of brochures highlighting activities in Kratie and neighbouring Stung Treng province to the north. The material available is professionally produced and looks great, and offers tours ranging from the seriously ambitious to more leisurely meanders. Funding for the original project ran out, but the mantle has been taken up by the guys at CRDT (at Le Tonle Tourism Training Centre and guesthouse). The tours are a source of revenue for communities, with the aim that they will be dissuaded from continuing to engage in harmful practices that damage wildlife and the environment. We weren’t able to assess how much this is the case.

We took 943 shots that looked just like this. Actually, this is one of the good ones.

Most other activities around Kratie fall into the leisurely category — leave the hardcore stuff until you get up to the northern hills.

Straight across the river from Kratie town is Koh Trong. It’s one of those bucolic, semi-timeless Cambodian destinations. Filled with sugar palms, paddy, market gardens and plenty of pretty Khmer-style wooden houses, it’s a delight to either ride or walk around the nine-kilometre circuit. It’s dead easy. Get the boat across the river, walk up to the top of where the boat lands and you’ll see, on your right, a bicycle hire shop. Hire a bicycle, then ride around the island.

Floating village on the southwestern corner of Koh Trong.

At the southern tip of the island, you’ll find a small Vietnamese pagoda and on the southwest bank a small floating Vietnamese village. At the northern tip you’ll find a relatively upmarket resort, Rajabori Villas — with a pool, which you can use for $5 — and about halfway north and halfway south along the east side, you’ll find two homestays. The northern one is by far the better one — try it out — and one night should be sufficient for most. You can book your stay either at the same place you hire your bike, or through CRDT tours back on the mainland.

The Mekong Irrawaddy dolphin is a vanishing sub-species of dolphin whose place on the critically endangered list of species looks like it may only be resolved by their final extinction — most likely as a result of dams upriver. It’s not the cheapest one-hour excursion to see them in their natural habitat — $9 for one person on a boat, $7 each for three or more. Even if you don’t want to go out on the boat, which only motors out about 150 metres off shore, but watch the dolphins from the shore, you still have to pay.

We ordered a coconut, and were given this. It was almost as refreshing.

A little south of the dolphins is a hilltop pagoda that offers great view over the surrounds (though you can’t see the dolphins from here, just in case you were wondering…) and there are also some great sin murals near the summit. While it’s not worth riding all the way from Kratie to here just to see the murals and the view, if you are in the area on a dolphin watching expedition, why not stop by? This is a great sunset spot on the way back from a late afternoon trip to the dolphins to catch them while they’re at their most active.

A few kilometres to the north of the dolphins lies Kampi rapids, where you can picnic in a series of platforms over the rapids and, should you wish, go for a swim. It’s a very scenic spot, with a bunch of tourist knick-knack shops at the top (and a $1 admission for foreign-looking tourists) and it makes for an easy, slow afternoon. What we’d recommend though is going a little further, just across the big bridge, where you’ll see a restaurant on your left — it has better food, colder drinks and solid view over the entire area — though you won’t be able to put your tootsies in the river. Also, no $1 admission.

Heading further north still, you come to the town of Sambar, which is home to the ambitious 100-Pillar Pagoda in whose grounds you’ll also find a turtle conservation centre set up by Conservation International. It’s a breeding centre for several species of turtle, who are then released into the wild. It’s amazing to see how vulnerable these gentle creatures are in their youngest forms, as they scrabble to hide in the sand. Admission is $4. The pagoda itself is lovely — we swear we only counted 94 posts though.

The interior ceilings are stunning.

Back in Kratie, every man and his dog is keen to rent you a bicycle. You can ride to the dolphins, the temple and the picnic place, you can lug it down 54,987 stairs to the boat to Koh Trong, push it through all the sand, then um, ride past the bike hire shop. Hint: hire your bike on Koh Trong.

Don’t forget to buy your krolanh.

Or you can just take a bit of a ride around town. The area to the immediate north and south of town are the most interesting — and pretty. Try it in early morning or late afternoon for the best pics. 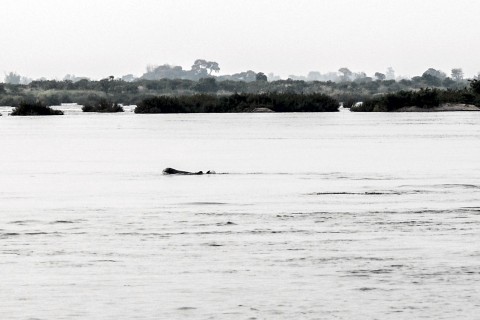 See a vanishing subspecies of dolphin 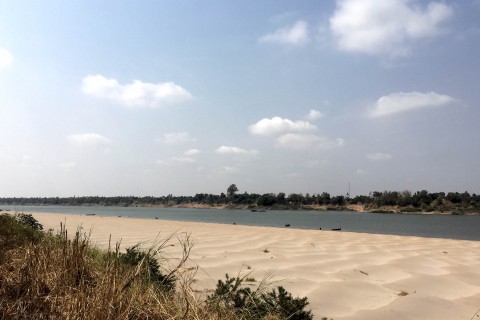 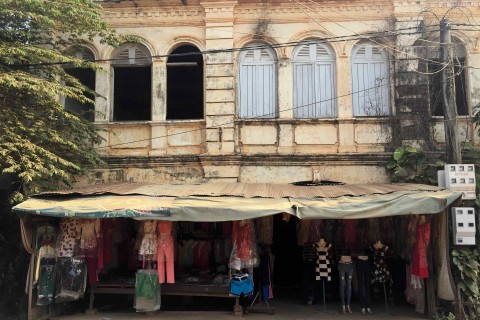