A slice of real Bunong life
Published/Last edited or updated: 16th May, 2016

The Bunong community around Sen Monorom is under threat. They are an ethnic minority within Cambodia, though, so far, make up a majority of the population in Mondulkiri, making a living by subsistence farming and, where possible, selling off any surplus. They are described as a generally very relaxed people, which may be one of the sources of their vulnerability as more and more of their land, which is mostly unsecured, is taken over by ethnic majority Khmers.

They now live on a sort of cusp between their old traditions and the seeming inevitability of modernisation, which can make visiting and staying in one of their villages an interesting, possibly conflicting, experience. But it is no less “authentic” — whatever that means — for that. So, just because your homestay may have a satellite dish, it doesn’t make it any less real. And believe us, you’re still going to get woken up by the cattle wandering through at 05:00 in the morning.

We booked a trip out through Callum at The Hangout, including a night with a family and trek the next day, which was supposed to take us to Kbal Phei, but we were defeated by the ridiculous temperatures at the time. However, your hotel or any of the tour operators opposite the Oeun Sakona Hotel in the middle of town can also organise tours.

Homestays in Cambodia are always somewhat awkward experiences as the shy, curious but uncertain family meets and welcomes the shy, curious but uncertain foreigner into their home. We were warmly welcomed and sat in on a drinking session as friends of the family sought to ensure that their elephant’s dose of diarrhoea would be cured by a liberal consumption of rice wine by its owners.

The Bunong do like to drink, it’s safe to say. In the excellent travelogue, A Dragon Apparent, Norman Lewis describes his journeys through Vietnam and Cambodia in the months following the French defeat at Dien Bien Phu. His account of his travels through northeastern Cambodia are a comical catalogue of failed attempts to remain sober as he moves from one village to the next, his arrival prompting inevitable, joyful break outs of the local hooch, a potent rice wine. There are rules to its consumption too. If you accept a drink — which you are not obliged to do — you must finish it. And if you choose to sip from the clay jar, you must drink a cupful. If you take more, then you have to finish the second cup.

We dined with the family, on a simple, tasty meal of vegetables with pork and rice, before turning in, jaded, for the night in our mosquito-netted hammock. Sadly for us, it was Khmer New Year. We’re not entirely sure where Cambodian are able to find the world’s worst techno, but every village has an ample store, and this one was no exception. And it played until just before the cows decided to stampede alongside the house. We won’t call this an ideal experience, but we loved it nonetheless because, at the end of the day, when else are you going to be reminded that you’re not asleep at an unconscionable hour of the morning by a bunch of roaming cattle?

We started our trek at 08:30 the next morning, when it was already blazing hot — a friend recorded temperatures of 42 degrees on the road between Sen Monorom and Banlung in Ratanakiri the next day. And this is generally the cooler part of Cambodia.

Roaming the forest trails, which Samoan knew as well as we know our home town, we were staggered by the number of birds that we saw and heard. From eagles — lots of eagles — to several species we’ve not been able to identify, their song and flashes of colour were a wonder. We also spotted a giant black squirrel, red squirrels and some very distant monkeys.

The trails wound along hills, plains and dense forest greenery ringing with birdsong, and my laboured breathing. Rather less bewitchingly, the path was often flanked by scorched earth, strewn with dead, blackened trees. In most cases, this is land the locals are converting to agricultural use. The trees are burned because it’s apparently not even worth their while to sell them.

We eventually stopped at one of the loveliest waterfalls in the area, where underneath a tree that almost sang with butterflies, Samoan prepared a traditional Bunong dish: bamboo soup.

Samoan enjoying a cooling swim in the waterfall.

The bamboo in this case being the receptacle and not an ingredient. The ingredients included aubergine, rattan, and lots of chilli, for a beautiful, spicy dish accompanied by grilled pork and rice. By a mile our favourite meal in Mondulkiri.

The whole experience was $70, though this will decrease per person if you are more than just one. 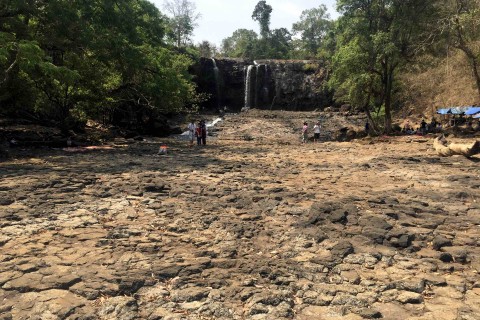 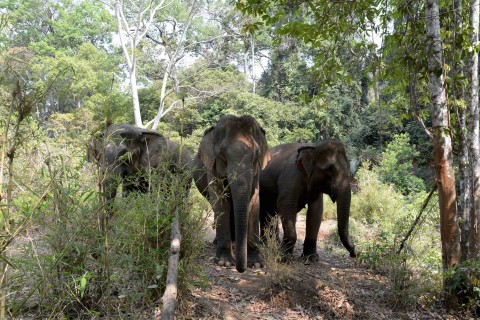 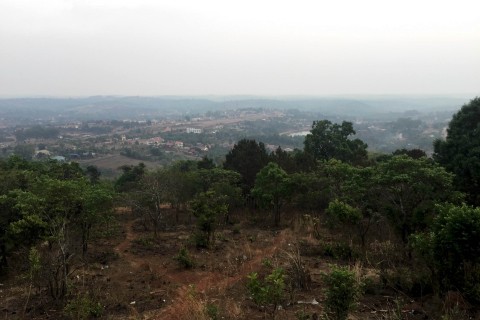 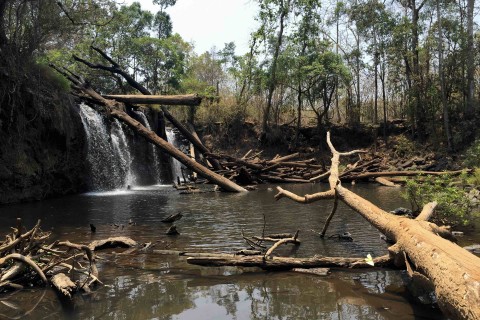