Pepper grown in Kampot has enjoyed a reputation as the world’s best for decades. Chic Parisian restaurants in the 1930s wouldn’t serve anything else. It derives its flavour from a combination of the rich, mineral soils around Kampot mixed with the sea air, and the bat guano that is deposited in caves around the hills.

Kampot is ringed by plantations, most of which accept visitors. A tour is an interesting way to find out how the pepper is produced and to pick up some of your own to take home, for less than you’ll pay for it elsewhere.

Certified Kampot pepper is organic by definition, or it cannot call itself Kampot pepper. The producers create their own fertilisers from cow dung and bat guano. If the product you’re buying doesn’t have three different labels, one from the Kampot Pepper Promotion Association, one attesting Kampot’s Protected Geographical Indication from the EU, and one from the Cambodian Organic Agriculture Association, then it’s not Kampot pepper, no matter what else it says on the label.

Prices for black pepper, as of 2016, start at about $15 per kilogram, though can be quite a bit more, and for rarer red and green pepper, it is even more.

The easiest way to find the plantations is to head for Phnom Penh on Route 33, and take a left about three kilometres along on to a dirt road. The road — which leads to The Vine Retreat — is flanked all the way along by plantations, all of which will be thrilled to see you. We visited Sothy’s Pepper Plantation, and found a farm that is dedicated to organic, sustainable production. They even cook their rice in a solar oven, which requires no energy except the sun to cook the rice properly, and takes just 45 minutes.

Further on is Wat Chamcar Bei, a hilltop temple with far-reaching views, particularly pretty at sunset. The pagoda itself is no great shakes, although full of brightly coloured mural scenes. To get there, pass The Vine Retreat then follow the road as it bends to the right and continue past the reservoir to Chamcar Bei village. Turn left at the woman statue roundabout and continue straight on until the school where a very steep dirt track rises up on the left to the pagoda.

Both motodops and tuk tuks can be arranged to cover all of the above. As a guide, it’s about $7 to Vine Retreat. It’s cheaper to negotiate a day rate based on where you want to visit. Or you can hire a motor scooter and do it yourself. The dirt road is quite rutted, so take care.

Salt flats near the coastline.

On the way back, if you don’t go to the Kampong Trach caves, take a left turn at the roundabout with the salt workers to go and check out the salt flats. If you’re on a moto or driving yourself, you can cut back to Kep along the coast road, which will take you through villages and the back of palm-lined Angkoul Beach. The going is difficult in places — sand is a pig to drive through — and a tuk tuk will not be able to make the journey.

To find the road, head back towards National Route 33 from the salt flats, and turn left towards the sea when you get to a split between the tarmac road and a dirt road which will take you down to the coast. Just when you get to the coast, there is a right turn along a narrow track through the village that takes you along the beach and eventually onto a wide, straight road that hugs the coast and will eventually bring you back to Kep.

Our top 3 other sights and activities in and around Kep

General things to do

Enough to keep you busy 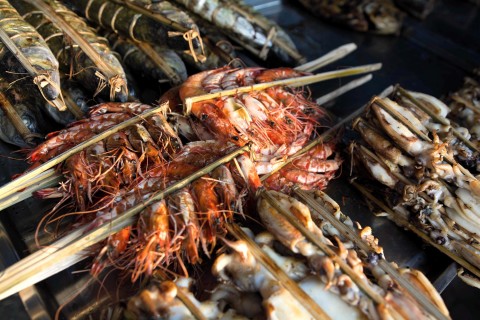