Featured on Indonesia’s 50,000 rupiah note, and among the most photographed temples in Bali, Pura Ulun Danau Bratan is a postcard-perfect classical Hindu-Buddhist temple complex. Set partly on a small island in the crater lake, Danau Bratan, according to archaeologists the site has possibly had spiritual significance since megalithic times.

Pilgrims flock here from all over Bali as the temple is particularly important for post-cremation ceremonies (melasti). As such, there’s a good chance of seeing a bunch of locals in fancy threads here, adding to the visual splendour of the architecture and surrounding landscape.

Entering the manicured gardens of the complex, to your right you'll see a magnificent banyan tree, and to your left, seemingly out-of-place in this predominantly Hindu complex, a Buddhist stupa. Robed Buddha statues encircle the shrine, and these are often used as a backdrop for wedding photos. Look behind, and up on the hill a large mosque looms, reminding us of this multicultural nation’s ability to (mostly) live peacefully with religious diversity.

The inner sanctums of the four Hindu temples that form the major part of the complex are not accessible to non-worshippers, however the merus (tiered shrines) and ceremonies can be viewed from the temple gates. A sign requests visitors to “dress neatly and properly” — in Bali this means that a sarong and sash are required. This is ignored by the majority of visitors, but please don't let that include you.

The most photographed part of the temple, the 11-tiered and three-tiered meru atop a small island reflected in the lake, can be seen as you pass the candi bentar (split gate) to the lake’s edge. Note that during the drier months, the lake often recedes and the island is no longer surrounded by water. Here you’ll have to fight the busloads of domestic tourists waving their 50,000 bills to get the classic clichéd ... Travelfish members only (Full text is around 500 words.)

Please sign in to read the rest of this page. The full text is around 500 words.

Our top 2 other sights and activities in and around Bedugul 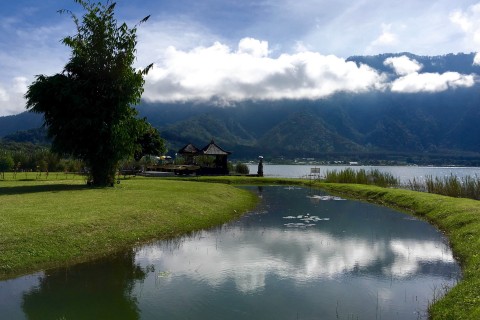