Dramatically perched on the edge of the towering cliffs above thundering surf at the Bukit’s southwestern coast, the iconic Pura Luhur Uluwatu (Uluwatu Temple), can feel a little underwhelming, but the real magic appears towards the end of the day as the sun sets over the Indian Ocean and the monumental silhouette leaves jaws gaping.

Uluwatu Temple is one of Bali’s holiest sites, reputedly founded around the 11th century as one of the sad kahyangan or “six sanctuaries”—pivotal points, said to provide spiritual balance to Bali—it plays the role of a vital guardian of the southwest. The temple is built from grey coral stone, tougher than the volcanic stone of most of Bali’s temples, meaning that the details here are generally well preserved.

Only worshipers are permitted to enter the actual temple structure, but visitors can climb the stairs to the outer entrance gates flanked by statues of Ganesh wrapped in ceremonial cloth and circumnavigate the outer walls. From the southern side you can take a peek into the central courtyard where you will see the arched kori agung gateway presided over by a leering Kala head. Once you’ve wandered around the temple structure, walk along the fenced cliff ledge to neighbouring headlands to the south or north to capture a sunset silhouette.

Uluwatu Temple is held hostage by a troupe of thieving monkeys who can be most unpleasant—we have had an earring ripped from our ear in the past here and flip flop taken off our foot (yes really) and have seen them run off with people glasses leaving them virtually blinded. Remove jewellery, hats and glasses and be aware of the little buggers with your phone and camera—if they do take something, look for an attendant to help—you will probably be asked for a small fee to facilitate retrieval.

The highlight of a visit to Uluwatu Temple is the fabulously entertaining kecak dance performed in the amphitheatre near the southern headland. Unlike most Balinese dances that are designed to be performed as entertainment for the gods, Kecak was developed in the 1930s as an entertainment for tourists (although its roots are in the Sanghyang trance dance).

The kecak is based on an episode from the Hindu epic the Ramayana when beautiful Sita is kidnapped by the evil giant Rawahna and her husband Rama has help from the monkey god, Hanuman and his army of monkeys to rescue her. Kecak is accompanied by a rhythmic chorus of chants—chak chak cak sounds which give rise to the name. Swaying in circles, men in black and white sarongs produce this cacophony of sound—they are the monkey army, and the wind and fire among other non-monkey images forms a tremendous multi-layered soundscape and quite the spectacle.

Slapstick comedy ensures when Hanuman the white monkey enters the stage and jumps around the audience, picking cooties from people’s hair and stealing hats (like the real monkeys here), but the real drama escalates when coconut husks are set ablaze and Hanuman dances among the flames for the finale.

Uluwatu Temple can get extremely crowded, as it is a popular sunset stop for tour groups and if you wish to see the Kecak dance, you’ll have to queue early for tickets, although the booth doesn’t open until one hour before the performance. We asked our driver to queue while we checked out the temple, but in high season it may be worthwhile to join a tour that includes the dance to guarantee a seat.

As the area is considered holy by Balinese, visitors are required to wear a sarong and sash, both of which are on loan with your ticket. Menstruating women are asked not the go beyond the entrance to the temple stairs. The Kecak dance starts at 18:00 and tickets are available from a booth inside the temple grounds from 17:00 (start queueing earlier) and cost 100,000 rupiah (you have to pay the temple entry first).

Seating is unreserved on hard bench seats (sensitive folk bring a cushion), and the best views are had from the southern side of the amphitheatre where you can view the temple in the background. Latecomers will be seated on the ground in front of the dances, and while you may experience the full force of the dancer’s energy here, watch out for the hot coals at the end. At the end of the day traffic leaving the temple can be horrendous, if you have booked dinner somewhere you may need to take that into account.

Our top 1 other sights and activities in and around Bukit 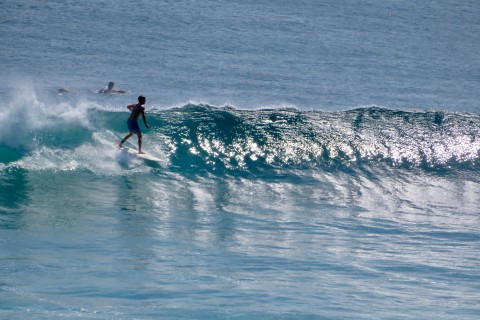 So much sand, so little time.