We took a walk and kept walking
Published/Last edited or updated: 23rd May, 2017

Those with energy (and sufficient sunscreen) can walk all the way from Kuta to Tanah Lot—it is more or less all the same stretch of sand, after all. This takes you through all the beaches of Canggu. Here’s a wrap on what you’ll find.

Save for a few rocky patches, this mostly north-south running stretch is a single beach. To be accurate this area is more northwest-southeast running, but we’re running with north-south to keep things simple. For our purposes we’re starting at Batu Belig, a little to the north of Seminyak’s W Hotel, and heading north all the way to Mengening Beach, from where, still further north, you can see the Pan Pacific Hotel, and beyond that, around the headland Tanah Lot. We stopped at Mengening as the river was a little high to cross, but it is apparently possible to walk all the way to Tanah Lot. It took us about three hours at a reasonable pace to walk from Batu Belig to Mengening. Wear a hat, use sunscreen and bring some water!

Trash on the beach
It is important to note that we did this walk in May 2017—dry season—and the beaches were, by Bali standards, extremely clean—as reflected in the photos. Over the entire walk we only saw one nappy. In wet season however, between October and March, it is sadly a very different story as a combination of torrential rain and onshore breezes make these beaches filthy. Absolutely filthy. We would not swim here at all in December and January because of the trash on the beach and in the water—there is nothing quite like getting slapped in the face with a wet nappy while body-surfing.

Also note that much of the beach is not patrolled. You are expected to be aware of your own abilities when it comes to swimming here. Mixing surf and booze generally isn‘t all that smart.

Batu Belig
This stretch marks the break from Seminyak to Canggu proper, and is marked by the very popular 707 Bar, a rustic, beanbag-strewn sunset bar that draws in the hordes every evening. Music can be loud and the crowd busy. if you prefer something a little quieter, head a little back towards the airport to Warung Pantai, our preferred spot of the two. Both serve simple Indonesian and Western dishes and cold drinks.

Walk north, and you’ll pass a couple of salubrious private villas—great spots to bed down if you can afford a few thousand dollars a night (WiFi is free)—keep going and you’ll see a pretty Balinese shrine sheltered in bright yellow and orange umbrellas with piles of offerings out front. Just after here is a very festy lagoon with a bridge leading to La Laguna—a bar and restaurant famous for its brightly coloured wagons which had instagrammers pitching fits when it first opened.

Berawa
Cross the overflow where the festy lagoon empties out to sea and you’ll set foot on Berawa Beach (also called Brawa) right in front of the spectacularly ugly LV8 Resort Hotel Bali—you’ll know you’re nearing it when you see the enormous white pillar out front (compensating for their bad taste we assume). In contrast to the luxurious villas you just passed by, this hotel is nowhere near as far back from the high water mark as it should legally be.

Afterwards there is another string of scruffy beach bars and surf schools, then the ageing Legong Keraton and the brash bamboo and wood-themed Finn’s Beach Club. Here Jalan Pantai Berawa runs back from the beach into Canggu proper. Very limited parking is available and expect the local transport mafia to make it impossible for a legit taxi to pick you up.

We definitely recommend skipping Finn’s and continuing along the beach a little to where you’ll find some locally run bars not owned by foreigners who allegedly kidnap their financial advisors; instead we say support local businesses and all that. We’re particular fans of the Naked Coconut, but Red Rasta, Kokoloko, Hidden Beach Bar and the unfortunately named Red Neck Family Beach Bar are all good spots for a cold drink and a swim. Each has a mix of deckchairs and beanbags and the sunsets here can be brilliant. Food is available but tends towards the very simple and can be very slow to appear. These bars back on to some more fancypants villas and then there is a parking area—if you have your own wheels this is a far more hassle-free place to park than anywhere near Finn’s.

Nelayan Beach
Cross another canal and you’ll reach a cluster of fishermen shacks that mark the beginning of Nelayan Beach. The huts are used by local fishermen to store their gear for fishing and if you’re here in the morning, generally between 08:00 and 09:00, you’ll get to see the fishing boats returning. They’re all jukungs—Indonesian fishing boats—that were traditionally powered by sail but now all have outboards. They run them up onto the beach and a bunch of locals drag the boats up above the highwater mark and help unload the catch. The day we walked through they were unloading buckets and buckets of tiny prawns which were then laid out on tarps to dry in the sun.

Many of the shacks have been painted by local artists, bringing some life to otherwise quite ugly concrete cinderblock shacks—look for the mermaids and the kids whispering behind the doors. Also keep an eye out for the offerings, laid out before heading out for a morning of fishing.

The road beside the shacks, Jalan Nelayan, runs up by Serenity Eco Guesthouse and into Canggu proper.

Batu Bolong
Cross another small river and you’ll reach the start of the beach bar strip which leads to Pura Batu Bolong and the surf break known as Old Man’s. Named as such because the wave here is long and relatively gentle (and so, suitable for “old men”!), this beach head has developed dramatically through the 2010s. The classically ornamental Hotel Tugu Bali was one of the first properties to appear here but it has been solidly built out by bars and cafes all around it. Old Man’s in particular, while sedate during the day, is a heaving and messy beach bar come the evening (watch your gear—phone theft is a problem). Watch your boozing if you’re planning on riding home.

On the other side of Jalan Batu Bolong, just past Hotel Tugu Bali, you’ll find The Lawn, which offers good drinks and food with a modest beachside horizon pool—it lacks the mayhem of Old Man’s and is better placed for sunset. Get here early for the upstairs corner table.

Echo Beach
From Old Man’s continue north and you’ll reach an enormous beachside development and immediately after it, you’ll reach Echo Beach. Many moons ago, this was just a cluster of beach shacks, but it is today the most developed area of the entire stretch. A popular surf spot, there is a distinctly effluent-ee aroma around low tide. We’d not swim here, but it is not unusual to see more than 100 surfers in the water. Running back from the beach, Jalan Batu Mejan is lines by hotels, cafes, ice cream shops, minimarts, a co-working centre and so on—you get the idea.

North of the road’s beachhead lies another row of beach bars kicked off by Sand Bar—another late night beach spot (as with Old Man’s watch the boozing then riding combination). The bars and deckchairs are packed in tight, and when combined with the aromas you get in the ocean, this is our least favourite stretch of the entire beach. But that’s just us; this area is regularly packed.

Pererenan Beach
Cross yet another small river and you’ll see the beach bars drop right off as you reach sleepy Pererenan Beach. Jalan Pantai Pererenan empties out here, right beside Pondok Nyoman Bagus Guesthouse, which has expanded greatly over the years. The beach is a bit scruffier here and we’d say if you’re looking for a patch of sand to lay on, it’s worth walking north, past the road head and the enormous statue, and plonking yourself down on the jet black sand. If you’re swimming, do watch the currents along here.

Continuing along the beach, you’ll notice the sand getting darker (it gets hot underfoot!) and there will be more fishermen around than surfers. Depending on the tide, you’ll have a couple of small rivers to cross and then before you know it, you’ll be at Seseh.

Seseh Beach
Also referred to as Munggu Beach, Seseh is a lovely low-key area yet to see the development rife around Seminyak, Yes, the villas are here, but there are no big hotels or beach bars. If you need a drink and a bite, cute Warung Alus sits just back off the beach and does good simple fare and icy drinks. There’s no real view, but this is a comfortable and friendly spot to rest up. Continuing along, you’ll pass a small temple and some fishing shacks and then you’ll need to follow the trail around the front of an understated garden villa. Go around the headland for better beach.

Mengening Beach
Around the small headland is a lovely stretch of jet-black sand with just a couple of small villas set on it. As you continue, you’ll reach a mind-numbingly awful retaining wall built by an enormous villa. The wall, built of concrete blocks, is probably 10 metres tall and is an absolute eyesore. Passing here at high tide could be tricky. The stuff beachfront properties do to guard their precious views at all costs really defies belief some times.

Jalan Pantai Mengening reaches the beach here. Keep going and you’ll reach another stupid wall with another stupid resort going in, then you need to leave the beach and follow a small road which runs along the cliff behind the beach. The beach is lovely, reached by a steep set of steps towards the northern end of the beach. It’s great for lazing on, but again, watch the currents if you go for a swim.

Towards the northern end of the beach, Pura Gede Luhur Batu Ngaus sits on a rocky headland just out off Mengening Beach. From here you can continue on to more beach and then the river that marks the change to Nyanyi Beach. This is as far as we got!

Our top 2 other sights and activities in and around Canggu 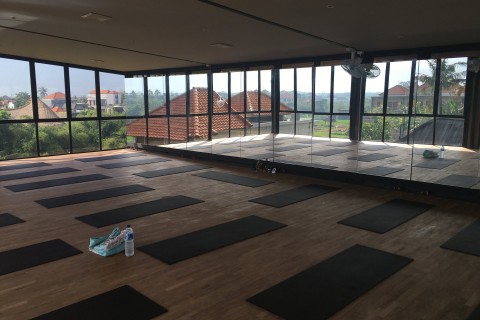