Although Denpasar isn’t a particularly pedestrian friendly city, it offers some cultural rewards for those willing to spend a day wandering its (sometimes) traffic-clogged streets. Most sights are within walking distance of each other, and as well as discovering some of Bali’s heritage, you’ll get a chance to observe modern urban life.

Denpasar’s roads have zebra crossings, however they are mostly just decorative. If you find crossing the busy road daunting, just remember to use your “magic stop hand”—walk slowly, but at a steady pace, with your arm out. The traffic is slow moving, and many streets are one-way (which doesn't mean much, actually). Most drivers are courteous and will stop for pedestrians, just don’t baulk or stop in the middle of the road.

Starting at Museum Bali, allow at least an hour to enjoy the impressive collection and interesting hybrid palace and temple style architecture.

Next door to the museum, Pura Jaganatha is Bali’s relatively modern state temple. Set in a spacious courtyard punctuated with fragrant frangipani trees, the focal point is a towering white five-tiered padmasana (“lotus throne” shrine)—you will see what looks like an empty throne atop the tower, a seat reserved for Sanghyang Widhi Wasa, the supreme deity in the Balinese Hindu cosmos, worshipped here as “The Lord of the Universe”, Jaganatha. Apart from ceremonial days and the full (purnama) and dark moon (tilem), when the courtyard is bustling with worshippers, the temple is usually quiet. Check at the Tourist Information Centre for festival dates. You are required to wear a sarong and sash and cover your shoulders, as well as pay a donation to enter. Sarongs can be hired at the temple entrance. Guides offer their services for about 50,000 rupiah, but do negotiate a firm price before committing.

In front of Museum Bali and Pura Jaganatha across a narrow traffic-free street filled with hawkers and satay sellers, Lapangan Puputan Badung (Puputan Square) is a busy, grassy green square that commemorates the Puputan Badung, a mass suicidal last stand by the Rajah of Badung and his subjects against the Dutch on 20 September, 1906. Rather than submit to the colonialists, hundreds or possibly thousands (accounts are sketchy) took their own lives by ritually stabbing themselves with a ceremonial kris (traditional wavy dagger).

One account describes the Raja, Ida Cokorda Pemecutan IX, being carried from the palace on a palanquin with four bearers, dressed in funereal white, having already received his last rites. He then instructed a priest to kill him before the mass suicide followed. A couple of blocks to the east of the park a small monument depicts the raja carried by his bearers. Today the park is abuzz with playing kids, picnickers, joggers and men playing chess, watched over by a giant bronze family bearing krises and spears, draped in white sarongs. Every September 20, a commemorative festival (Mahabandana Prasadha) is held in the square.

At the northwest corner of the square, a busy intersection is guarded by the four-headed Catur Muka (literally four face) Monument atop a golden lotus, watching the traffic in the four cardinal directions. This marks the geographical centre of Denpasar. On the northeast corner of this intersection, you’ll notice a large white clock, a legacy from the colonial period; it still keeps accurate time.

Heading east along Jalan Surapati, you’ll pass the Denpasar Tourist Information Centre. Pop in to pick up a map or some brochures, though we found the staff’s knowledge and English skills a little lacking. Open daily 09:00–19:00, closed public holidays.

It’s worth a short detour around the corner to Jalan Kepundung to see the interesting Gereja Katolik Paroki Santo Yoseph (St Joseph’s Catholic Church). The church is built following Balinese architectural traditions. Balinese-style kneeling, praying angels guard the entrance, while a host of standing angels surround a statue of Jesus on the spire. The roof is thatched with black palm material used in Balinese temples, with the tiered spire resembling a Hindu meru. Christian iconography is carved into the stone details of the building. The bell-tower is in the form of a kulkul, the ritual drum tower in Balinese temples. The interior is equally fascinating, with an intricate stone-carved altar flanked by temple umbrellas. A large painted kayon (sometimes gunungan), the tree of life symbol used in wayan kulit shadow puppets, sits above the altar. The tree is entwined with a snake, common in the symbolism of both religions, along with Adam and Eve characters. Here the eye of providence (an eye within a triangle, beaming rays of light) is painted above the couple. In a chapel to the right of the altar, a beautiful relief stone-carving with gilt detailing represents the birth of Jesus. We are informed that at Christmas the church is festooned with penjors, curved decorated bamboo poles used in Balinese Hindu celebrations, and temple umbrellas. Sunday mass is held at 07:00, 09:00 and 17:30, then on Monday, Tuesday and Thursday at 06:00 and Wednesday and Friday at 17:30 and Saturday 17:30.

If you have time or are keen to see more fine local architecture, wander two kilometres east to Taman Budaya, the Bali Arts Centre. Although interesting architecturally, when there are no cultural events, the area seems pretty desolate. The lack of signage coupled with unhelpful staff on our visit didn’t leave a great impression, however when there are scheduled events, the area comes alive with food sellers and activity. The annual Bali Arts Festival, a month-long celebration of Balinese culture, is worth checking out. Contact the Denpasar Tourist Information Centre for dates or information on other cultural events. Entry fee 20,000 rupiah.

Continuing north 350 metres along Jalan Veteran, near the corner of Jalan Kedondong sits Puri Agung Denpasar, known as Puri Satria (Satria Palace). This is the home of the reigning king of Denpasar IX, Ida Cokorda Ngurah Jambe Pemecutan. You won’t be able to go in, but you can have a peek through the gate; occasional cultural performances here are open to the public. Next to the palace, Pasar Burung Satria, or Satria Bird Market, is a tourist attraction we encourage you not to support. Bird markets often condone the trade of rare (and sometimes endangered) birds and animals that may have been trapped cruelly (or illegally); visiting tourists only endorse such practices.

Backtrack once again to the Catur Muka Monument, and turn right into Jalan Gajah Mada, crossing the Tukad Badung River to explore Pasar Kumbasari, Denpasar’s large multi-storey “art market”, a treasure trove of (sometimes) cheap souvenirs and handicrafts. You may end up with an uninvited “guide” whom, if they don’t make any commission from steering you towards certain shops, will ask for a tip. A polite “I don’t need a guide, thanks” usually suffices. From Pasar Kumbasari look across the river to what was an equally large produce market, Pasar Badung, razed by fire in February 2016. The market has a temporary new home further north, but some produce stalls operate along the laneways and on the lower level of Pasar Kumbasari.

When you reach the intersection of Jalan Thamrin you will see the Ida Cokorda Pemecutan IX monument of the raja on his palanquin. Turn right into Jalan Thamrin and on the corner, look into the outer courtyard of the red brick Puri Ukiran Pemecutan, the palace of one of the most powerful families during the feudal era in Denpasar; they still wield significant influence today.

Five hundred metres north, the road becomes Jalan Sutomo. On your left, you can see the crumbling, but beautifully restrained brickwork of Pura Maospahit. The temple is the oldest in Denpasar, and as the name suggests, dates from the 14th century Majapahit Empire. The architectural style is typical of East Java, however most is a reconstruction that followed an earthquake in 1917. The main entrance is only open on festival days; if you wish to enter at those times, you will need to don full Balinese pakaian adat (ceremonial dress).

Continuing north, on the opposite side of Jalan Sutomo, Puri Agung Jro Kuta Denpasar is another royal seat, built in the early 1800s by descendants from the Klungkung royal family. In its heyday, it was not only a royal residence, but a powerful centre of government. Again you can only look from outside and imagine life behind the royal doors.

Follow the dog-leg-road north for another 800 metres to Pasar Tiara Grosir on Jalan Cokroaminoto, the temporary home of Pasar Badung, Denpasar’s main produce market, while it’s being rebuilt. The colourful main market opens early morning, and closes around 16:00, but stalls operate in the bustling outdoor area 24 hours, so if you’re in need of a 30 kilogram jackfruit or raw chicken in the middle of the night, this is the place.

The next group of sights to the south of the city in Renon are a little far for a casual stroll, so jump on an ojek or into a taxi, and head to the Bajra Sandhi Monument, also known as the Balinese People’s Struggle Monument. Here along with impressive architecture, and a brief history of Bali in diorama form, you can climb the tower for panoramic views over Denpasar.

Around the corner, about 500 metres away in Jalan Tukad Musi I, Katedral Katolik Roh Kudus (Holy Spirit Catholic Cathedral) is another curious Christian-Hindu architectural hybrid, however a little more austere than Gereja Santo Yoseph. The red brick-clad structure conforms with the style of the palaces (puri) and temples (pura) around Denpasar. The central steeple and bell-tower both feature a triple “meru” tiered roof. Three spires to the west, and three towers facing east incorporate decorative and symbolic elements of Balinese Hindu architecture. We were unable to enter the main cathedral, as it is closed when there is no mass, however a small chapel is open for private prayer. Sunday mass is held 06:30, 09:00 and 17:30, then on Monday, Tuesday and Thursday at 06:30 Wednesday and Friday at 18:00 and Saturday at 06:30 and 17:30.

Head back to the main road, Jalan Raya Puputan, and to the west, on your right Museum Agung Bung Karno pays tribute to the Republic’s founding father, Sukarno, whose mother was Balinese. The four-storey museum and library was not open when we visited and not even the department of tourism could offer us any information on opening hours or entry fees, however it’s still worth mentioning for the nationalist sculptures in the front courtyard.

Returning to central Denpasar, it’s either a two-kilometre walk north or quick ojek ride to Pasar Malam Kereneng on Jalan Kamboja, Denpasar’s bright and buzzing night market, and easily the biggest we’ve visited in Bali. The action kicks off around 18:00 and doesn’t stop till the wee hours. You want it, they’ve probably got it, or a fake version of it anyway. Elbow your way through the crowds for clothes, electronics, even painted hermit crabs with Disney decals on our visit, and so many food stalls it’s difficult to choose. We tried the satay and jajan Bali (local cakes with coconut and palm sugar), but there was babi guling and nasi campur too, among others. As there are very few tourists here, the chances of finding a taxi are limited (all the locals come by motorbike), but it’s less than a kilometre walk west along Jalan Hayam Wuruk to the Catur Muka Monument, back to centre of town.

Our top 4 other sights and activities in and around Denpasar 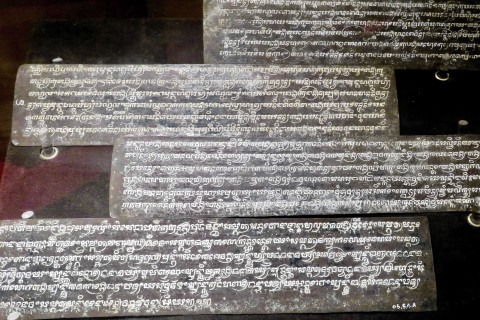 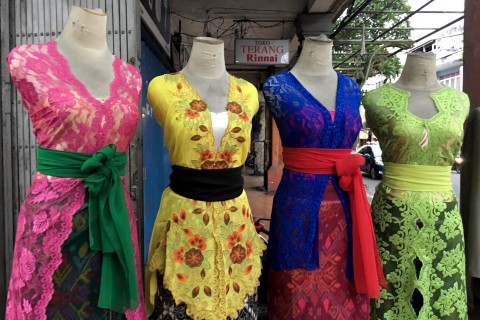 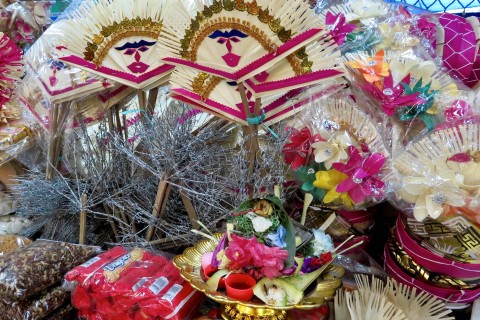