There’s a new kid on the Bali mall block, and, for a mall, it’s rather pretty. We’ll put aside arguments about what our beachside Bali dream might be for now and look at the curvy new Beachwalk, across from Kuta beach, for what it aims to be. In summary, if we absolutely had to have a mall beachside, it may actually be quite like this one.

Things are still being unwrapped at Beachwalk.

It’s airy, low-rise, and has lovely alang-alang towers topping it here and there (it’s not quite the Big Tree chocolate factory, but well, baby steps). It’s all soft and undulating curves, which is rather appealing, until you want to get from A to B and realise you have to go via C, D and E to get there — the practical affect of the bends is that it can be a bit disorientating, which of course means you’ll walk past more shops than you necessarily want to.

When I say airy, I mean the public walkways are not air-conditioned, which is as it should be, of course. Is it because the developers were truly being eco-friendly or is it just that electricity is so darned expensive here that it’s just not worth having it? Either way the end result is good (though the shops themselves are still chilled). It makes me wonder how this place fits into the theory that the air-con malls that first mushroomed across the United States are now facing if not a complete demise, then something of a transformation into “lifestyle” centres.

You spin me round round baby right round.

What’s here? Some shops that are here for the first time in Bali, such as Pull & Bear, which is probably the main draw. I did notice their social media manager adroitly avoids answering on Beachwalk’s Facebook page whether a MAC cosmetics store is to open here; that would be nice. The usual chain stores feature here as well, plus a top-floor food hall that reminds me of places in Singapore — it’s a bit Disney-esque, but look if that’s what it takes for some people to be brave enough to try Balinese and Indonesian dishes, then, well, pass the sate lilit. And then if you enjoy the food, please go somewhere outside Kuta to learn how to cook it: Bali Asli, perhaps? There’s also a play area here, which given the paucity of things for kids to play on in Kuta, could be a blessing for parents looking for a half-hour respite.

A cinema is set to open around September; here’s hoping they don’t just play the usual blockbusters and save some screen time for some arthouse films as well. For now quite a few shops are still being fitted out, but enough is open here to have a browse if shopping’s your thing. It’s certainly a big step up style-wise compared to both Bali Mall Galleria (off the beach) and Discovery Mall (further south). The toilets are clean, though watch you don’t trip on the step going into the individual cubicles!

You can also buy Balinese coconut oil in Bali.

The mall is close to the Pullman Hotel, and a longer walk from the Hard Rock. If you’re driving from elsewhere it’s a bit of a pain to get to with Kuta and Legian’s one-way road system; if your cabbie seems to be going around the world to get here, it’s probably because they have to, so don’t panic!

Our top 6 other sights and activities in and around Kuta

Well worth the money 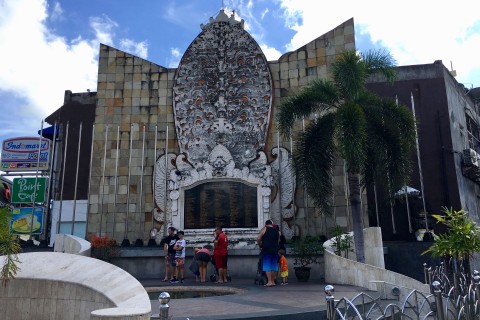 A tribute to the victims

The hassle on Kuta beach, Bali