Sitting astride a ridge that runs up to the northwestern rim of the Bedugul caldera, the small Balinese village of Munduk has a series of jungle trails that lead to a selection of beautiful — and powerful — waterfalls. With a half day we were told, one could easily visit three of the best and most accessible waterfalls around Munduk. So that’s what we set out to do.

Munduk offers plenty of places to stay and just about every one has its own version of a local waterfall map and often no two routes are the same — as luck would have it we embarked on one of the more challenging routes and, if we were to do it again, we’d do it backwards. That aside, here’s a guide to exploring three of the best waterfalls near Munduk.

Walking towards Bedugul along Munduk’s main road, you take the footpath that leads to your left immediately after Taman Ayu Homestay and you follow it on and on and on. Eventually it narrows. Then it narrows again. Then it turns to dirt. Then to mud. Then you’ll round a bend to the right and you’ll hear the roar of magnificent Melanting waterfall. Like us, you’ll probably keep walking, thinking you’re getting closer to the falls (you are, but you’re nearing the fall’s summit) then you’ll suddenly hit a small bridge that crosses the river and you’ll realise, ahh yes, that is the bridge marked on the map — I have gone too far.

So then you start to backtrack, looking for a trailhead running off to the north. You keep going back till the waterfall is more whimpering than roaring and you’ll see a very small trail running to the north — if you get back to the hardbase path that goes to the small house with the big dog, you’ve gone too far.

So you take this small unsignposted trail which teeters along for perhaps 50 metres, then splits two ways. Which way? The trail to the right looks more substantial, so try that — we did — for a good 100 metres or so.

Backtrack and turn left, down the trail that doesn’t look like a trail. Work your way down the overgrown rocks and through more than your fair share of spider webs. You’ll reach a cutting where there is a small woodshed and a dog. There’s always a dog.

Keep going straight. Down down down.

Remnants of steps will appear and then lo and behold a hardbase trail running to the right. Follow it. Then you’ll reach a bridge. Cross it and keep going. Clamber over the small landslide that has washed some rudimentary steps away.

By now you’ll be able to hear Melanting roaring again. Keep going. You’ll pass some very well manicured steps coming down the cliff to your left. Stop and curse for a few minutes. Keep going (some paddling may be required), then you’ll see the top of the falls.

Seeing the falls in February means they are just about at their most powerful. There’s a stone outcrop you can take some shelter behind, but the water comes down with such force that it’s akin to a wind tunnel with spray exploding back up into the air. You and your camera will get very wet, very quickly.

Quite literally soak up the atmosphere for a while then press on.

Backtrack to the staircase and start up it. This is the end of the trail for sensible people. It is a steep set of stairs but there are great views into the waterfall pit as you climb. Eventually you’ll leave the waterfall behind and the trail will flatten out to slippery dirt carefully watched over by three dogs at 100 metre intervals.

You’ll eventually reach a T-junction — if you’re as smart as we were and didn’t pack any water, veer left and stop off at a cafe where you can get an excellent coffee spread.

Once you have rejuvenated, head back to the junction and take the right option. This will take you to a junction with a (perhaps unstaffed) ticket office on your left — go straight and follow the trail (a little paddling may be required) to reach Tanah Barak waterfall.

Tanah Barak is perhaps half the size of Melanting waterfall, but is more concentrated, delivering it with an incredible force. When we visited the stairs were overflowing and, as with Melanting, the spray made keeping the camera dry somewhat of a challenge. Well, actually a complete waste of time.

From here, backtrack to the ticket office and veer left. This puts you on the trail that leads back to the car park on the main road. Before you get there though, you’ll join another track coming in from above you and where the trails meet there is a big sign for an eco-cafe. Double back and follow this upper trail. The sign from the car park says 900 metres, but the walk felt close to double that. Most of it is easy enough, but the last part which slogs it up to the cafe itself is steep and, in the wet, slippery. Take care.

Eventually, you’ll reach what used to be known as Golden Valley Cafe and is now simply Eco Cafe. It’s a simple warung overlooking Golden Valley waterfall. The fare is simple, but the dessert of lak lak, coconut cakes with palm sugar syrup and freshly grated coconut, are noteworthy. They also make a point of explaining that their kopi luwak is collected from wild civet droppings. Reassuring considering in some cases the civets are reared in terrible conditions.

Even if you don’t feel like eating, this is a peaceful spot to relax with a cold drink and rest those weary legs. Once you’re done, backtrack along the trail the whole way to the car park on the main road, from where it is about a two-kilometre walk back along the main road into Munduk proper.

If you’re of reasonable fitness, you could do all the above in four hours, but mere mortals would be well advised to set aside six hours or more and take it at a comfortable pace.

Oh and do it backwards — start at Golden Valley, then Tanah Barak, then Melanting, then backtrack out — we wouldn’t advise taking the trail head at Taman Ayu. Aside from the trail being far clearer and safer, you’ll go from the smallest waterfall through to the largest, which we think is a better approach.

Our top 1 other sights and activities in and around Munduk 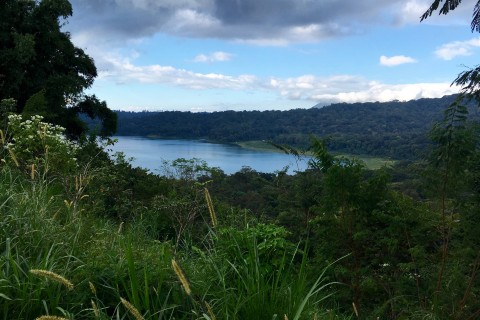