With a passion for art and culture, local entrepreneur and philanthropist, Agung Rai established ARMA in 1996. The museum is but one branch of an empire that includes restaurants, a resort and commercial gallery: a true rags to riches story as he started life as an uneducated farm boy working as a street pedlar in Kuta.

Two large pavilions present the permanent collection and temporary exhibitions, and regular theatre and dance performances are held in an open stage near the main gallery. See schedule here www.armabali.com/arma-culture/performances/. Cultural workshops and children’s dance classes are frequent events, and the compound includes a cafe and bookshop all within a relaxing and beautiful well-established garden.

The museum may not be the largest in Ubud, but its significant collection spans the development of Balinese styles as well as works by notable Indonesian and Western artists. If you’re short on time, this museum offers quality over quantity, although explanations of the various styles are not as comprehensive as those at Neka Art Museum. Works are labelled in English, with some works also labelled in Japanese.

An open pavilion with a temporary exhibition gallery leads from the main entrance to the garden. Directly in front, the double-storey Bale Daja features many of the great names in Balinese art history, with a brief compendium of the major schools including Wayan-, Ubud- and Bantuan-styles. Downstairs an exhibition salutes the works and influence of expat artist Walter Spies, mostly with reproductions of his works.

Across the garden, Bale Dauh displays Balinese works with a greater Western influence, alongside works by Western artists including Mexican Miguel Covarrubias who penned the book “The Island of Bali” in 1937, still regarded as one of the most authoritative works on Balinese culture. Notable is a large work by Javanese painter, Raden Saleh Syarif Bustaman (1807-1880) “Portrait of a Javanese Nobleman and His Wife”, striking for its modernist sensibility. Raden Saleh was a pioneering Indonesian artist, the first to dabble in Western-style painting. He trained, worked and found fame in Europe. Some of the large and detailed works by Balinese artists in the collection could have you mesmerised for hours, look out for the enormous canvas by I Ketut Sadia “Lion Floating Happily”, documenting the Lion Air plane crash into the sea off Bali.

After a look around the galleries, take a break at the cafe to enjoy a free tea or coffee included in your ticket. If you plan on visiting the museum and attending several performances at ARMA, you may consider signing up as a “Friend of ARMA”, a yearly membership of 250,000 rupiah offers free admission to the museum and performances, as well as other benefits. The smallish museum can be visited in an hour, longer if you wish to take your time to study the works. Entry to the museum is via Jalan Made Lebah or via the west entrance off Jalan Raya Pengosekan. 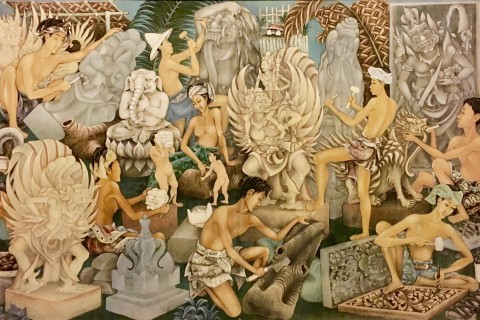 The Palace of Paintings