Carved into the steep sheer rock face of the lush Pakrisan River valley, about 14 kilometres north of Ubud, monumental Gunung Kawi is one of Bali’s oldest and most enigmatic antiquities.

The impressive complex houses two rows of “candis” (shrines) on opposite sides of the gorge, towering more than seven metres, hewn from the cliff within sheltered niches. The site forms part of Bali’s subak irrigation system, granted UNESCO World Heritage status in 2012. This is one of our favourite sites out of Ubud to take visitors to and it belongs on your must-see list.

There is much conjecture, but the candis are believed to have been constructed in the 11th century, dedicated to descendants of the royal family of the Warmadewa Dynasty whose influence stretched across Bali to Java. One possibility is that Gunung Kawi was to honour King Udayana (for whom Bali’s Udayana University is named), his queen Mahendradatta, and their sons Airlanga (who became a king of Java), Anak Wungsu (King of Bali) and Marakata, along with imaginably lesser queens and concubines. This is perhaps Bali’s very own Valley of the Kings, although it’s unlikely they contain actual remains.

Of course there are local legends as to its existence, and the character here who literally had a hand in it was the giant baby, Kbo Iwa who was said to have carved Gunung Kawi, along with a number of other sights in Bali with his fingernails. Look for the giant baby statue on the main road between Sanur and Ubud—that is Kebo Wanara or the Kbo Iwa of folklore (you might hear him crying if he hasn’t been given enough offerings).

As you descend the punishingly steep steps towards the sacred river (wear comfy shoes), passing the usual huddle of stalls selling tourist tat and cold drinks (very welcome on your ascent), have cameras at the ready for the gobsmacking views of the surrounding rice terraces tumbling into the valley below.

Entering through a narrow stone arch at the bottom of the ravine the portico dramatically reveals the intriguing complex. The atmosphere of ancient myth is palpable, and the area holds great religious significance to present-day Balinese. Visitors are required to dress in sarong and sash (which can be borrowed for a donation) and menstruating women are asked not to enter.

Take a left before you cross the river to see four of the shrines. Although facades only, the candis follow the architectural form of the stepped pyramidical candis of Central and East Java. From here you can spy the row of five better preserved candis across the river though the curling vines. An often overlooked tenth candi is further south. Cross the stone bridge over the river for a closer look, and you will notice inscriptions on two of the shrines: they read “haji lumah ing jalu”, (the king immortalised here) and “rwa nakira” (his two sons).

A bathing pool edges this collection of shrines, and water flows from spouts fronting each, this “holy water” is often collected and used in purification ceremonies. During Gunung Kawi’s annual temple festival it’s believed the spirits of the former royals take temporary residence in the candis. The holy water carries their power and blessings to the river, offering fertility to surrounding crops. Nearby is a series of ancient cloisters with courtyards and meditation alcoves carved into the rock. Take off your shoes to enter and be careful not to slip on the mossy stone if it’s wet. Here feels as if you stumbled into a real life Raiders of the Lost Ark adventure.

Modern styled Balinese Hindu temple buildings are dotted amongst the ancient structures. Paths lead down to the river and to more carved cloisters, and up to a temple overlooking the area, locked at the time of our visit with a sign reading “Ladies are not allowed to enter this temple”.

The complex isn’t huge, but there’s plenty of secret corners to explore, so allow a good hour, plus some extra time to recover from those stairs. Kafe Kawi (T: (0813) 3817 7554; kafekawi@gmail.com; Open daily: 09:00–18:00 (closed Galungan, Kuningan and Nyepi) at the top of the steps offers an extensive menu of drinks (including cold beer or an espresso) and Indonesian and Western meals, and the view is a stunner.

Gunung Kawi is a 30 minute drive from central Ubud (traffic dependant). Look for the sign posted turnoff north of Tampaksiring village on Jalan Bayu Brata. Cycling here is also possible from Ubud, but be warned that it’s a long uphill slog most of the way (quick back!). Be aware there are two temples named Gunung Kawi in the area, the other not-so-ancient Gunung Kawi Sebatu is a pretty water temple dedicated to Vishnu and is also worth a visit. 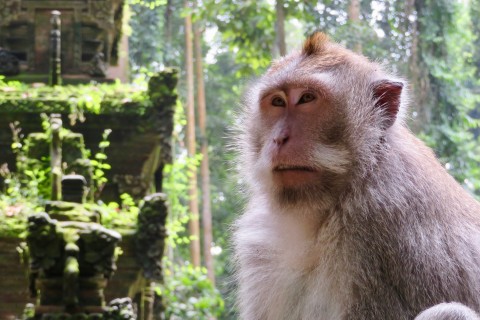 The other monkey forest