Impressive but an effort to reach
Published/Last edited or updated: 20th April, 2017

Four hours into a two-hour bike ride, as our guide literally hacked a trail through the jungle with a machete, we thought, “What the hell are we doing here?” Five minutes later we passed a rise, saw Biantal Waterfall and realised that we were here for a very good reason.

Set in the southern reaches of Mataru district, it would be unfair on the surrounding villages to describe Biantal as being in the middle of nowhere, but when you approach it from Kalabahi, it certainly seems to be in the middle of nowhere. The district is home to at least seven waterfalls of note, with Biantal being apparently the largest.

Our guide suggested it would be a two-hour motorbike ride from Biantal but in practice it was an almost four-hour ride over some particularly ordinary sections of road. Once you reach the closest village to the falls, it is then a 30-minute walk down a mix of concrete steps and then a dirt trail. From there it took us another 30 minutes to machete our way through the jungle to reach the lower falls, which you then cross a couple of times and then climb over some boulders to reach the main falls.

The primary falls at Biantal are perhaps 50 metres tall, jetting off and tumbling down a jet-black stone edifice and pounding into a small pool. The power of the falls generates a swirling breeze which guarantees your camera lens will get wet within about 30 seconds.

The setting is pure jungle, with an enormous tree to the right and a stone overhang and shelter to the left. We visited after heavy rain, so the waters were quite muddy, but the village guide said in dry season the waters are clear and the lower falls (there are four primary sets in all) form popular swimming holes for weekend visitors.

It is a spectacular setting and a very impressive site. We were very glad we didn’t turn back, as we almost did three hours in. Coming from Kalabahi, a visit to Biantal will take the best part of a full day and while there are some stretches of new road, much of the road is in appalling shape. The sections that are new are cheap roads that will not wear the wet seasons well. Long story short: Be ready for a bumpy ride!

As with many things is Indonesia, much of the joy is in the journey. You’ll climb up through teak forests enjoying impressive views back to Kalabahi and the airport, then you drop back down onto the tabletop that forms the central area of Alor. Expect rice, corn and cassava farms along with plenty of gawking kids and churches everywhere. As the road deteriorates, the forest becomes decidedly Australian Outback: hilltops strewn with eucalyptus and short brush and a deep red soil exposed by cutaways.

You’ll then reach a rise and see the first glimpses of the Timor Sea and the mountainous spine of Timor gracing the horizon. From here, you’ll run down towards the coast, with some even more appalling roads, along with lush wet forest. As you ride, keep an eye out for distant village huts on the surrounding hills.

You’ll hear waterfalls in the distance and spy at least one if you happen to be walking because the scooter you are using is a heap of garbage, but it is worth persevering to reach the main event.

There is no public transport to the village at the trailhead, so your only option is ojek or a 4WD. If going by ojek, be sure to check that the bike is of a decent size and in good condition. Ours wasn’t, and we had to walk a lot of the steeper stretches as ours just couldn’t make it. 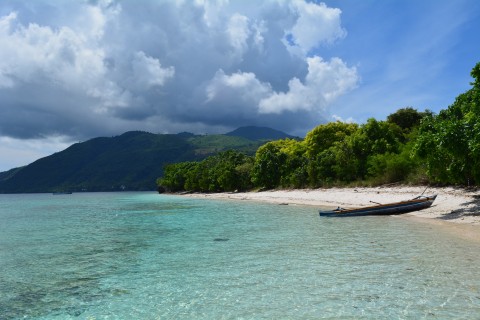 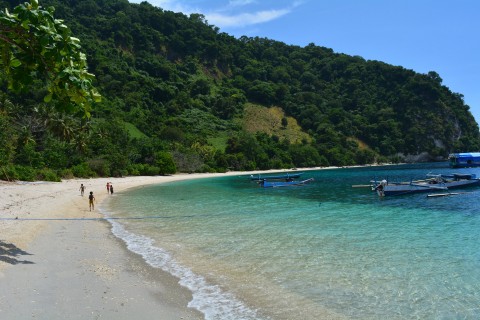 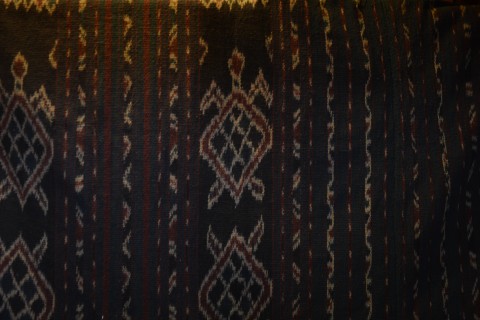 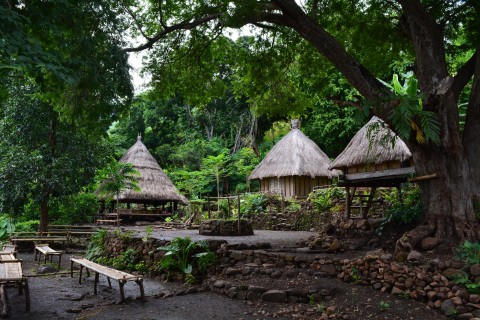 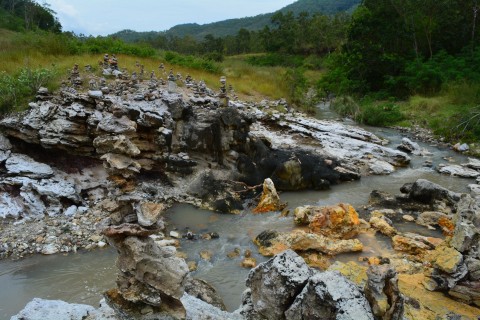