As well as a beautiful marine park, Karimunjawa is blessed with lush forested mountains ideal for a bit of trekking.

As the paths are mostly unmarked, you’d be wise to employ a guide to show you the way—we arranged our trekking guide though The Happinezz guesthouse for 300,000 rupiah (the price drops to 225,000 per person for two, and less for more). Our guide, Tomo, didn’t speak English, but you can request an English speaking guide, he was however, excellent.

We trekked up the lower of Karimunjawa’s two larger peaks on the western side of the island, not high, but a very steep path to about 250 metres above sea level, through secondary forest. As we climbed higher, we could catch glimpses of extraordinary beauty of the coral reefs and islands of the archipelago through the trees. Some sections were so steep we needed to use our hands and vines to pull ourselves up. Although the path was dry, it would be very muddy and slippery if there had been a bit of rain.

It took about two hours at a very leisurely pace to reach the summit and a stupendous view was our reward. To our delight, our guide had carried a number of tiny saplings in his bag to plant, and proudly showed us several larger ones he had planted on previous trips. He explained that the forest here is mostly new, had only been declared a national park in recent years and previously had been logged to almost bare—he was keen to help reforest.

For the trip down we followed a different path on the other side of the hill, stopping for a break as our guide climbed a coconut tree to gather refreshments. A troupe of macaques scuttled through the trees, but they were very shy and quick. Our guide mentioned he sometimes sees deer here too. We also heard stories in the village of monkeys “as big as a man”—the Karimunjawa bigfoot perhaps?

However there is some wildlife to be aware of: the venomous and aggressive Malayan pit viper is known in these parts—best to wear long pants and boots when trekking and carry an elastic bandage. Another reason to walk with a guide!

We reached the bottom after an hour and our guide suggested a trip to a nearby mangrove forest. We’re not sure if this is part of the regular trekking programme, but it was a delight, as he took us in a small canoe around the coastal waters where we spotted some small rays and large nasty looking jellyfish. Although a little pricey, this was a most enjoyable way to get the heart pumping a bit. Gather a few folk together to reduce the cost. Recommended. 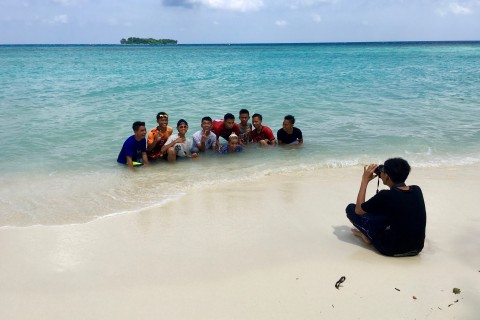 Sand and sea… and rubbish

Overpriced but important to visit 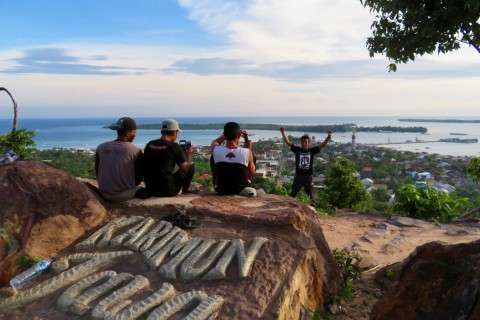