A couple to choose from, but no great shakes
Published/Last edited or updated: 17th February, 2018

While Banyuwangi province is home to some beautiful beaches, the provincial capital’s municipal affairs are nothing to get too excited about but they’ll do at a pinch for a sunset photoshoot (though both are eastern-facing beaches).

The two most accessible strips of sand to downtown Banyuwangi are Pulau Santen (though, don’t get excited, it isn’t really an island) to the south and Pantai Boom to the north. Both beaches face Bali across the Bali Strait and are positioned close to the centre of Banyuwangi’s long, sometimes seeming never-ending north–south sprawl. If you’ve just got the one night in Banyuwangi and want to have some beach time, there is really little to divide the two, but if we had to choose we’d go with Santen—whichever you choose, don’t expect chilled Bintangs in a beanbag—as far as we were able to determine, both beaches are dry.

Pulau Santen is actually a bit of a curiosity, as it has an entire section of the beach (the northern strip) designated women–only—supposedly the only beach with this set-up in all of Java. The sand (in both areas) is a coarse grey, running to a smoother very dark grey by the time it hits the water. Come sunset, brightly coloured beanbags are strewn across the sand and you can order simple snacks and cold drinks (no alcohol) from a clutch of small food stalls. We made do with a fresh coconut.

You reach the beach by walking across a small wooden bridge and once on the sand the women’s section is to the north and the mixed (ie., for everyone) section is to the south. The beach is reasonably clean, but as soon as you reach the fishing boats at the southern end it becomes a garbage dump again. We walked here from downtown and it took about an hour from Taman Blambangan. If you decide to walk, you’ll pass by the gaudy Chinese temple Hoo Tong Bio (which is worth a look if you are on foot, but probably not if you are on a scooter or in a car) and then between a bunch of shrimp or fish farms (we’re not sure which) before you reach the bridge to the beach. It is well signposted from downtown.

“Great things” are in the pipeline for Pantai Boom, at least according to tourism literature and a bunch of posters as you enter the enclave including a marina and an eco resort, but aside from erecting a toll booth to charge visitors 5,000 rupiah admission, there wasn't too much going on. The beach, like the above-mentioned Pulau Santen, is a rough, almost gravel in spots, grey sand affair, but it gets smoother and darker towards the water’s edge. We saw no bean bags here, just a solitary row of deckchairs with red umbrellas.

As with Santen, late afternoon into sunset is the most popular time to come and it can get very busy on weekends, but unlike Santen, here the eating and drinking (no alcohol) is restricted to a large food court just back behind the sand. We didn’t eat here, but locals were big fans of the shark satay—we didn’t try it ourselves.

To reach Pantai Boom from the northeast corner of Taman Blambangan, walk north one block to Jl Nusantara, turn right and just keep walking—it is about a 20 minutes walk in total.

Our top 1 other sights and activities in and around Banyuwangi 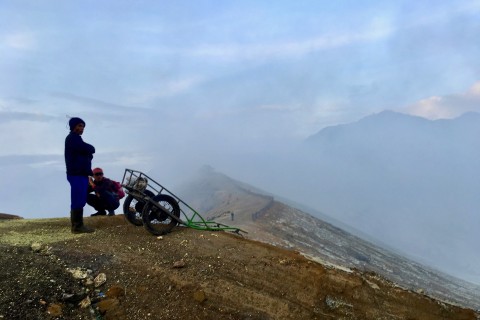