Galeri Nasional Indonesia—Indonesia’s National Art Museum—offers an excellent overview of the history of modern and contemporary art in Indonesia. Housed in a historic building in central Jakarta, this forms one of the city’s best museums, and it is free!

The building itself, or correctly group of buildings sit on Jalan Medan Merdeka Timur opposite Gambir Station. The central single-storey Indies Empire style structure was built in 1817 as a private residence and was later converted into a school. Today it serves as a temporary exhibition space known as Gedung A (Building A). In 1902 an additional double-storey building which now houses the permanent exhibition (Gedung B) was added to extend the school. Today the institution comprises a number of single- double- and triple-storey historic and contemporary buildings, with galleries, offices, art conservation and restoration laboratory, the Library of Indonesia National Culture (which seemed to be non-operational on our visit) along with a gallery shop and cafe—both of which have sadly closed down.

The permanent collection comprises two wings on the upper level. Visitors are not permitted to take anything other than what you can carry in your pocket into the exhibition—no bags, hats, selfie sticks, sunglasses or hoodies, with lockers available at the entrance and you must register before entry. At the top of the stairs, the lobby presents a visual timeline of the history of art in Indonesia from prehistoric times. The wing to your left displays chronologically (backwards from the entry point) the history of modern Indonesian art a well as a small gallery of International artists’ works and the wing to your right houses contemporary Indonesian works. The well curated exhibition offers overviews of each period in English and Indonesian and individual pieces are well labelled, however touch-screen technology videos with in-depth explanations of individual works were mostly not in working order.

To view chronologically, first walk through several exhibitions to the far end of the wing on the left to the International collection with mostly smaller less significant works from well-known International artists including Wassily Kandinsky, Sonia Delaunay, Hans Arp, Jean Lurcat, Victor Vasarely as well as works by Chinese-French painter, Zoa Wou-ki and Cuban printmaker, Belkis Ayon among others. Heading back towards the stairs, the exhibitions span works from the early 19th century though to the 1970s.

The first Indonesian gallery is dedicated to Raden Saleh, considered the forerunner of modern Indonesian art. He was one of the first Javanese artists to study Western-style painting during the colonial period and his large romantic works attest to his talent that made him the star of several European courts and one of Indonesia’s most revered artists.

The next gallery show artworks from the early 20th century naturalistic Mooi Indie period (1920–1938) and PERSAGI movement (1938–1942). Mooi Indie meaning “beautiful Indies” was coined as a criticism of this romantic indigenous movement that was heavily influenced by European works shown at the Bataviaasche Kunstkring (Batavia Art Circle) which now houses the excellent Tugu Kunstkring Paleis Restaurant.

The natural landscape themes were seen as showing Indonesia as a travel-postcard paradise with no reflection of social reality at the time (sounds somewhat familiar). PERSAGI is a contraction of Persatuan Ahli-Ahli Gambar Indonesia (Indonesian Artists’ Association) founded in 1938 with the philosophy that contemporary art should reflect the artists environment and express cultural or political thoughts and criticisms. While stylistically different, this group of artists define the first truly modernist movement.

Look for Sindutomo Sudjojono’s “Tjap Go Meh” (1940) with masked figures which reminds us a little of the works of German artist Otto Dix and Agus Djaja’s wildly expressive Dunia Anjung (World of Dogs), these two artists were the founder and chairman of the PERSAGI movement. The 1947 painting by Otto Djaja (Agus Djaja’s brother), “The Meeting” of a couple sitting on a bed was sure to have been very controversial at the time.

The adjoining gallery showcases works from the era of Japanese occupation, the early days of independence and the emergence of various studios in Indonesia. The Japanese established a cultural centre, Keimin Bunka Shidoso, aimed at promoting the greatness of Asian culture and around the same period PUTERA or POETERA in the old spelling (Pusat Tenaga Rakyat or the Peoples’ Power Centre) was a political organisation whose cultural arm popularised modern art in Indonesian society and helped strengthen the move towards independence (as opposed to promoting Japanese propaganda). POETERA presented the first solo exhibitions of some of the big names in Indonesian art history including Affandi, Basuki Abdullah and Kartono Yudokusumo, some of whose works can be enjoyed here.

The final gallery in this wing is dedicated to the birth of Indonesia’s Art Academies. The studio schools gave rise to formal art education institutions established within ITB (Bandung Institute of Technology) in Bandung in 1947 (initially with Dutch teaching staff), ASRI (Indonesian Art Institute) in 1950 in Yogyakarta and LPKI (Jakarta Arts Institute) in 1970 in Jakarta. These art academies soon become the leading breeding grounds for new Indonesian art movements and led to Indonesia’s position on the world stage of international contemporary art.

Moving to the other wing of the museum, the first gallery focuses on the Indonesian New Art Movement (Gerakan Seni Rupa Baru) springing from the student protests in the 1970s rebelling against the stagnant nature of modern Indonesian art at the time represented in a national Biennale. Here you can view Bonyong Munni Ardhi’s The Flag of Red and White as well as powerful works by Harsono, Ardii and I Nyoman Nuarta (whose large public sculptures can be seen all over Jakarta) among others.

The final section of the permanent exhibition presents vibrant contemporary paintings and multimedia collections including works by Nindityo Adipurnomo and Indonesian-Dutch artist Mella Jaarsma who together founded the contemporary Cemeti Art House in Yogyakarta and Swiss based Indonesian artist, Eddie Hara along with other internationally recognised contemporary Indonesian artists. These thought provoking pieces continue the evolution of a postmodern discourse on Indonesian social and political subject matter. This diverse collection will certainly appeal to art lovers but even if you know nothing about modern or contemporary art, there is something here to please everyone.

From time to time temporary exhibitions are presented in the neighbouring building, check the galleries website for details.

Galeri Nasional Indonesia serves a valuable place among Jakarta’s cultural institutions as well as being of great interest to visiting tourists, yet it is beyond our comprehension how such a fantastic, and important museum is passed by on tourism information when lesser museums are promoted. It does not feature on any tourist map we picked up, nor when we enquired about art galleries at the government tourist information centre it was not mentioned, and the only reason we know of its existence was that we stumbled past it. Such a pity as it seems the lack of patronage has led to the closing of the gallery shop and cafe and it also appears that the cultural library is not in operation.

So if you are visiting nearby Monas or filling in time waiting for a train at Gambir, add Galeri Nasional Indonesia to your itinerary.

Other contemporary art museums in Jakarta include the privately run and very popular (and with hefty entry fees) Museum MACAN and Art:1 and some modern Indonesian art forms part of the collection in the dusty and poorly curated Fine Art and Ceramic Museum in Kota. 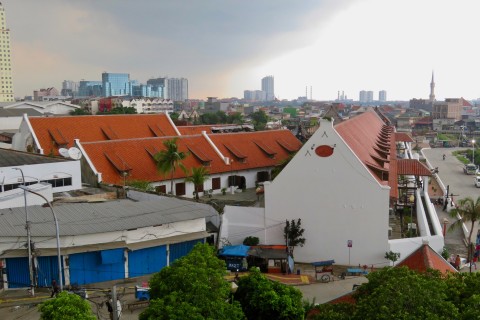