Glodok is Jakarta’s “Chinatown” but you’ll be hard pressed to find the touristic version of Chinatowns seen in other cities around the world. Instead this area of the city offers up fascinating laneways and markets in an energetic enclave jam-packed with great food and hidden temples.

We opted to explore Glodok with an engaging half-day walk with Jakarta Good Guides who offer pay-as-you-wish walking tours and whose excellent guides offer insight beyond just what you can see in this vibrant part of town.

The Chinese in Indonesia have been given the short end of the stick since 1740 when a Dutch led (and Javanese supported) massacre of possibly up to 10,000 ethnic Chinese ended with the survivors being forced out of the city walls of Batavia to live and set up business in what is now Glodok. History repeated itself with the anti-communist sentiments in the 1960s when it was again open season on the Chinese. Anything seen as “Chinese” was official banned—on customs declaration forms entering Indonesia as well as being asked if you were carrying drugs or weapons, you were forbidden to import anything with Chinese writing (this law was in place until the year 2000).

In the aftermath of the economic crisis in 1998, the Chinese were again targeted and rioting, rape and looting turned sections of Glodok into a burnt out shell. Many ethnic Chinese left Indonesia never to return, even though their families had been in Indonesia for generations. Unfortunately Chinese Indonesians continue to be the scapegoats in times of discontent and social unrest.

Our walk commenced behind the Novotel Hotel on Jalan Gajah Mada, where, in the shadows of the towering hotel sits a small restored traditional bow-roofed Chinese house constructed in the early 19th century now known as the Gedung Candra Naya, built as the home of magnate Khouw Tian Sek (Teng Seck) who was the “Kapitein der Chinezen” (the Chinese Captain) of Batavia. After World War II, Gedung Candra Naya came into the possession of the Chinese social organisation Xin Ming Hui when it was used as an educational institution and medical clinic. The name of the society was later changed to the Indonesian version, Candra Naya, when Chinese names were forbidden.

The single-storey street-facing building is the original and the Chinese-style buildings surrounding it which house restaurants and bars are more recent additions—early photographs on display show a double-storey building behind, now destroyed. The building itself is empty, used a function venue, but it’s of interest to view the original architectural details such as the cut ceramic work and detailed carved wooden beams.

We continued our walk along Jalan Gajah Mada to the corner of Jalan Pancoran, where the double-storey corner building, Pantjoran Tea House built in 1928 as a Chinese pharmacy, Apotheek Chung Hwa was one of the first old buildings renovated in the area. Here continues a tradition began by Kapitein Gan Djie in the mid-17th century, who placed eight teapots in front of his office for the exhausted peddlers who plied their trades in the street. The area then became known as “Patekoan”, “pa” meaning eight and “teko” meaning teapot in Chinese (teko is also the Indonesian word for teapot). A sign invites passers-by to enjoy a free cuppa—the pots with the red ribbon are sweetened. Further along Jalan Pancoran many Chinese pharmacies still operate, popular Tai Seng Ho had crowds waiting when we passed.

Turning left, we headed south into Jalan Kemenangan, into the heart of Pasar Petak Sembilan with stalls jostling for space in the narrow street. This traditional wet market sells all kinds of weird and wonderful raw food—slug-like sea cucumbers and vats of freshly skinned frogs included.

In a cloud of incense smoke, we shortly arrived at busy Jin De Yuan Temple (also known as Dharma Bhakti Temple), the oldest Chinese temple in Jakarta and originally built as Guan Yin Ting in 1650 then destroyed during the Chinese massacre of 1740 and reconstructed in 1755. Unfortunately much of the old building had been again destroyed by a fire in 2015, but this didn’t deter the worshipers at this busy temple and reconstruction plans were on display in early 2018.

Continuing south along Jalan Kemenangan 3, we swung right and right again and entered Gereja Santa Maria de Fatima (Saint Mary of Fatima Church), which looks much like a typical Chinese building, except for the cross on the roof and painted grotto of the vision at Fatima in the courtyard. Inside the church, Chinese architecture is mixed with Christian iconography.

Further north on the opposite side of the street, we squeezed through the narrow gateway of Vihara Jaya Toasebio dating from the 1750s, another colourful temple with dragon entwined pillars and an interior brimming with giant candles that burn for months.

From here the street narrows to a labyrinth of twisting alleyways—we ventured into Gang Kalimati passing an old Chinese calligraphy stall on the corner, along the way sampling some delicious Chinese snacks. Pangsit, homemade pork dumplings at Akin Kuo Tieh enticed, but we couldn’t resist a piping hot sweet treat—the cempedak goreng at Cik Lina. Cempedak is a fruit a little like jackfruit, but sweeter, here fried in batter and swirled with palm sugar syrup.

Turning left into the next gang, we came across a stall selling pineapples and what looks like small coconuts, these buah lontar are actually the fruit of the lontar palm and the stall owner deftly cut away the outer shell to leave a small clear gelatinous ball. They were cool and refreshing in the mouth, but had very little flavour.

Further along the gang, Pondok Hijau sells Chinese vegetarian food that looks and tastes (sort of) like meat. The satay and rendang are very popular here. The Laksa Lao Hoe stall opposite was highly recommended, but we sampled the sweet soup-like desserts served from vats a few stalls up, really we could have grazed all day in this little corner of foodie heaven.

We soon popped back onto Jalan Pancoran and cut across the road straight into Gang Gloria to one of Chinatowns most famous institutions: Kopi Es Tak Kie serving iced coffee since 1927. After our coffee pick-me-up, at the next intersection our guide pointed out the corner hawker centre with the popular stall Gado-gado Direksi. We were way too stuffed to eat any more, but were assured to ignore the somewhat grotty surrounds, as the gado-gado here is a favourite of several of Indonesia’s former Presidents, and if it’s good enough for them… we’ll have to go back and give it a go (when we are not so full!). The laneway returned us to Jalan Gajah Mada, close to Kota Tua, Jakarta’s old town centre.

Jakarta Good Guides offer regular pay-as-you-wish walking tours of Kota Tua and the modern city centre with additional destinations on weekends. Prior registration is required for the guided walks. 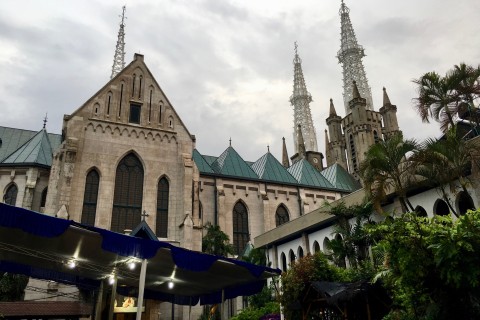