While waterfalls dot the valleys and ridges that encircle Gunung Rinjani, two of the most accessible and popular are easily visited from Senaru. They’re both spectacular and well worth the effort to reach.

The waterfalls of Sindang Gile and Tiu Kelep can be reached by two main access points at either end of Senaru. While suggested by locals, a guide is not required to reach Sindang Gile, but taking a guide is compulsory (and a good idea) to reach Tiu Kelep as the trail is not clear and you need to cross the river two or three times. Because the second falls require a guide, you may as well get the guide for both, for which you should expect to pay around 100,000 rupiah (for the guide — not per person) plus 10,000 rupiah admission.

The trail to Sindang Gile is paved and mostly steps the entire way. From Senaru it will take around 15 minutes to reach. This waterfall is a very powerful but concentrated fall, and while you can stand under it, don’t expect a gentle massage — it can be pretty painful — though very refreshing! A cluster of stalls sell water, snacks and sundries here.

Next backtrack up a little and a trail veers off to the south. This will take you over a viaduct (no safety fences) and along a water canal and some weirs and dams as you go upriver. It is a quite beautiful walk. You’ll also need to cross the river several times — this is where a guide is particularly helpful as the track is not all that clear. Eventually you’ll round a corner to see Tiu Kelep exploding above you. This is a truly majestic fall, with the water shooting out into the air and arching down into an icy swimming hole.

Legend has it that a swim in the swimming hole will make you younger — we assume due to the water’s cryogenic features — as the water is absolutely freezing. Our guide also warned us off swimming directly under the falls, though it wasn’t clear if this was due to dislodged objects falling on you, or just because it was too painful. Regardless, the rest of the pool is plenty large enough for an icy float.

On the way back, after you cross the aquaduct bridge, it is possible to enter the tunnel and follow the aquaduct through to the other side of the hill — this is a bit of a shortcut, but well worth doing. Just watch your footing — and the spiders. Not for claustrophobics but an ideal way to add to the Lord of the Rings-type of experience that a visit to Tiu Kelep is.

Our top 1 other sights and activities in and around Senaru 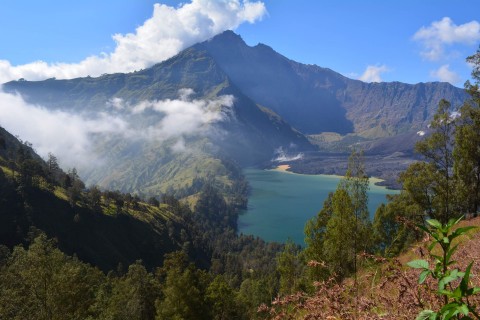