Henri Mouhot’s grave is a simple monument, found in a small clearing by the river, and is the final resting place of a fascinating explorer.

What were you doing when you were 34? By the time French explorer and naturalist Henri Mouhot was 34, he was meandering the Mekong region and the ruins of Angkor. While it is mistake to say he “discovered” Angkor, his posthumously published writing and detailed sketches in Voyage dans les royaumes de Siam, de Cambodge, de Laos (Travels in Siam, Cambodia and Laos) launched Angkor into the Western consciousness that grew into the myth of a lost civilisation.

On 25 July 1861, Mouhot arrived in Luang Prabang, an expedition of 500 miles on six elephants travelling 13 miles a day. He continued on in an attempt to reach China but in October, caught malaria and tried to return to Luang Prabang. He died on 10 November 1861 by the banks of the Nam Khan river. A tomb was erected in 1867 and was forgotten until it was rediscovered in 1990 by French journalist Jean-Michel Stronbino and local guide Monkhol Sasorith. The town of Montbeliard, Mouhot’s birthplace, donated a plaque and the French government donated for the upkeep.

The grave itself is unremarkable, a plain white sepulcher and plaque. The spot is more well known with locals as a riverside picnic spot. It’s less than 8 km from the town centre: follow Route 13 towards what’s often still referred to as the “new bridge” for cars to the airport. Instead of crossing the bridge, continue straight for 5 km, through Ban Phanom (can stop here for some textile shopping) and the road will eventually follow along the Nam Khan river.

A dirt road on the lefthand side goes down to the river to an spot that has been built up with bamboo sala huts that locals like to rent for a lazy afternoon with friends and family. It’s a short walk along the water from there.

Motorbike/bike parking for the tomb is 5,000 kip. 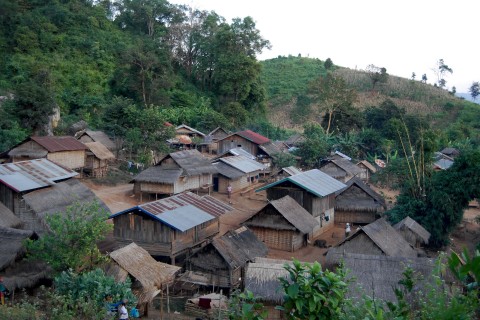