Luang Prabang has a whopping 34 UNESCO-protected temples to explore. If there’s one must see, it’s Wat Xieng Thong, considered the finest in all of Laos.

Wat Xieng Thong, once known as “The Temple of the Golden City”, holds great cultural, historic and architectural importance. It is serenely situated near the tip of the peninsula at the confluence of two rivers, with a grand staircase leading up from the Mekong. For centuries it was considered the ceremonial gateway to the town, with visiting dignitaries and soon-to-be-crowned kings arriving via these steps. It was one of US President Obama's stops on a daytrip to Luang Prabang in September 2016.

What will strike you upon entering the complex is how peaceful and elegant it is. The sacred structures are enjoyable and so is the generous space that surrounds them. Here you can stand back at a distance, finding shelter from the sun under pink bougainvillea or a Bodhi tree to admire the gilded facades, mosaic tiles and sweeping roofs that make this temple so distinct.

King Setthathirat, who ruled from 1548 till 1571, built Wat Xieng Thong in 1559. Incredibly, over the years it has survived war and raids including the sacking of the city in 1887 by the Black Flag Army. Up until 1975, it was the site of coronation ceremonies for Lao kings.

Most wats in Luang Prabang are living, breathing structures and social institutions. Monks live, pray, meditate and study at them. Important ceremonies are still performed, devotees visit and pay respect. That is what is most refreshing compared to, say, the ruins of Angkor Wat. Here you get intimate glimpses of real monastic life. You can perhaps chat with a novice monk and if you go at off hours, you can easily feel like you have the place entirely to yourself.

The main simof Wat Xieng Thong boasts three-tiered red roofs sweeping down to almost touch the ground. The exterior is black with elaborate gold stencilling while the base is covered with glittering turquoise and silver tile. The back of the sim has a truly stunning mosaic of the tree of life, a motif that reoccurs throughout Southeast Asia. It has become an iconic symbol of the entire wat.

The interior is dark, intensifying the gold stencil work. Myths, jataka tales (tales of Buddha), depictions of heaven and hell, and the stories of legendary King Chanthaphanith decorate the walls. The sim is surrounded by turquoise-mosaic covered lotus buds, as well as several chapels and stupas.

La Chapelle Rouge, or the Red Chapel, has a reclining Buddha which, in 1931, was taken to the great Paris Colonial Exhibition before being moved to Vientiane. It was eventually returned to Luang Prabang in 1964. The exterior glass mosaic mural depicts the heavens at the top and earthly scenes of people, animals and trees at the bottom.

Another highlight of the wat is the Chapel of the Funeral Chariot. This hall houses the funeral chariot of King Sisavangvong, who was crowned in 1946 and died in 1959. The exterior is covered with elaborately carved and gilded decorations.

Do allow yourself plenty of time to explore Wat Xieng Thong. The more time you have, the more treasures you are likely to spy. 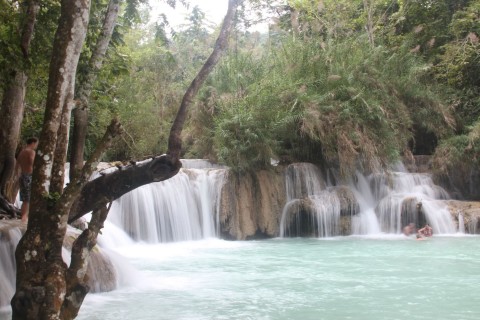