Quite an adventure
Published/Last edited or updated: 2nd June, 2018

Up for a little Udomxai adventure? Chom Ong Cave is located 44 km west of Udomxai, about half of that journey off-road. The remote cave is rarely visited, and that alone may make it worthwhile for some travellers.

Chom Ong is a cave system along a four kilometre mountain ridge. The Udomxai tourism department states that 17 km of it has been explored by the Lao-European Cave Project (2009, 2010 and 2011), and it is the longest cave in northern Laos. The cave is summarised as follows:

“The typical passage dimension is 20-25 m width and 20-30 metres-height. There are two overlaying passages, a river and a fossil passage, which are linked at one huge hall with 100 metres-length, 30 metres-width and ceiling heights of 30-50 metres.”

The easiest way to get to Chom Ong is to arrange private transport or a tour through the Tourism Office. However, for experienced motorbike riders, reaching the cave can be done independently.

Pack water, snacks, flashlight and wear decent shoes. Set out by 9:00 or 10:00 in the morning in order to be able return to Udomxai by nightfall. Head northwest on Route 13 (the road to Luang Nam Tha) for 24 km until the village of Ban Nambotakay (easy to know it is coming up as it is after Ban Lak 22/“Village km 22”). Look for the turnoff on the lefthand side, there should be a sign. Ensure you have enough petrol for the over 40 km roundtrip journey to the cave.

The next 18 km is challenging. The unpaved road undulates with some seriously steep sections and rough terrain, the kind that makes bones and teeth chatter. Locals make it look easy but we don’t recommend novices try this. We also don’t recommend using an automatic motorbike as they are designed for city driving and tend not to be reliable when worked this hard. This road is very difficult during rainy season.

A sore backside is the punishment but the reward is a scenic journey through pretty countryside, some high spots delivering a view to the rolling mountains. You’ll also pass through two rural Khmu villages.

At 18 km is a junction with the cave 2 km straight ahead and Ban Chom Ong village 2 km to the left. Independent travellers must first go to the village and ask for the guide who also has the key. As of February 2018 it was Mr Bounpeng, a young man with some basic English. He takes his role very seriously and will run to get his official guide badge, the registration book and tickets. Then together you’ll drive to the cave entrance. The ticket is 10,000 kip and the guide fee per group is 50,000 kip (not per person). Have the exact amount/small bills as it is impossible to make change.

The cave is a special experience. There’s no fluorescent lights, no paved walkway and no concrete steps. It hasn’t been developed except for string on the floor to show the way and the occasional numbered marker. The light from the torch barely touches the towering ceiling of the main hall, it’s just you and the guide who barely speaks English underground going where few tourists have been (based on the registration book, we counted six sets of visitors in two months). The journey requires some scrambling on boulders, ladders and sure-footedness. There are interesting formations, stalagmites and stalactites and we learned this the hard way, the very hard way: watch your head.

It’s over a kilometre walk to a drop off with the cave river below (you hear it rather than see it), then returning the same way. Roundtrip, it takes about two hours.

It is possible to stay overnight in the village. As outlined by the tourism office, it’s 20,000 kip per person and you need to bring your own food (vegetables, meat, rice) and it can be cooked for you for 15,000 kip. In Laos, “homestay” often doesn’t actually mean staying in someone’s home, rather, visitors stay in a purpose-built hut in the village. We saw the homestay building in February 2018 and it looked dilapidated. However, we were told that an NGO had recently come and word is that a future project will help develop the cave into a bigger attraction.

Udomxai’s tourism office has a one-day tour to Chom Ong with both an English speaking guide from the department and local guide, lunch and transport. Price depends on the number of people. Based on two, it is 760,000 kip per person. The two-day, one-night program overnights in the village and costs 1,200,000 kip per person, based on two. The main benefit to either program is having the English speaking guide and transport.

A map from the tourism office shows there is another way to reach the cave heading west from Udomxai for 40km, passing Nam Hin Reservoir along the way, arriving to Chom Ong village from the south. That means the trip in theory could be done as a 82 km loop, however, we are unsure of road conditions and it’s probably something for off-road motorcyclists to explore. Ask the tourism office for the latest.

Our top 5 other sights and activities in and around Udomxai 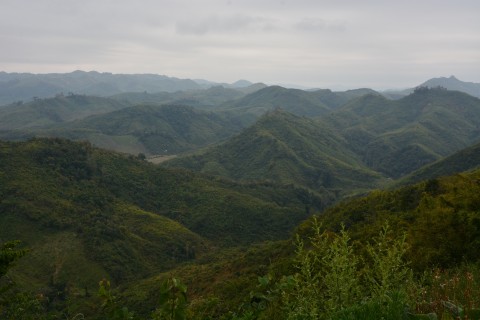 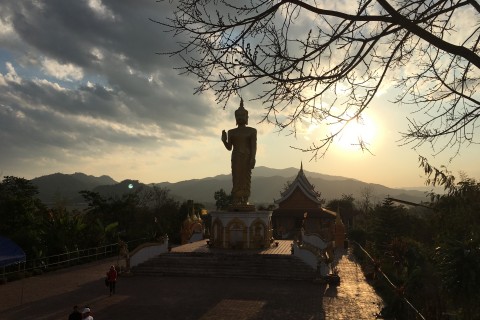 Enjoy a view and a steam 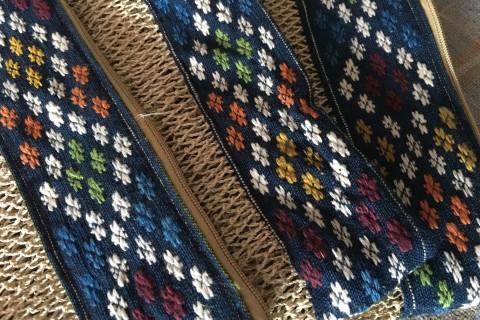 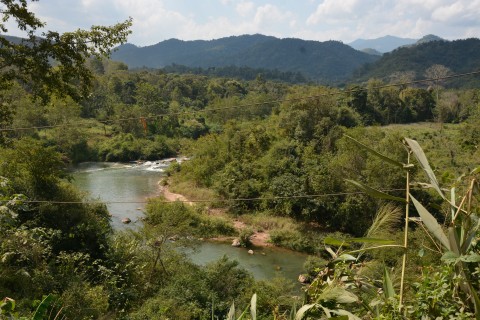 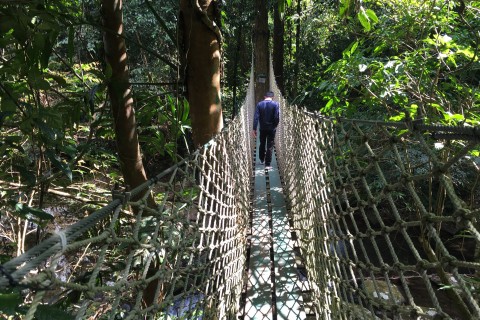 A scenic ride through the countryside