Take it easy or get active
Published/Last edited or updated: 16th February, 2017

The top pastime on Don Dhet is lying in a hammock and the most that people exert themselves is when trying to reach for their beer. If you do tire of napping or staring hypnotically at the river, the island has a few activities to get moving.

The main activity is to take a walk or grab a bicycle and explore. Get away from the ugly ramshackle of backpacker bungalows to discover the scenic side of the island with its edges lined with swaying palms and centre occupied by rice fields. While many aspects of traditional Lao culture have been suffocated by mass tourism, some families continue to grow rice and the paddies are extremely photogenic during the rainy season. A dirt track runs along both sides of the island, the east side until the historic French bridge to Don Khon, and some paths also cut through the middle to the bridge. Crossing costs 35,000 kip and it includes admission to Li Phi waterfall.

Exploring much larger Don Khon for a day is highly recommended. Tourist accommodation is isolated to a kilometre of riverbank leaving the rest of the island undeveloped and less affected by mass tourism. It has most of the 4,000 Islands’ notable sights such as Li Phi waterfall, a must for the falls and for the excellent beach hangout, and less busy Khone Pa Soi waterfall. Take some time to see vestiges of French colonial ambition. Seven kilometres of rail once transversed both islands and it was the only true railway ever built in Laos. It’s possible to see two locomotives and the old port.

Almost all guesthouses and shops rent bicycles and a few have started to rent motorbikes. The bicycles are all the cheap variety, the ones that look like oversized children’s bikes, and the motorbikes all look like they’ve been to hell and back. The “roads” on both islands are either dirt, mud or covered in golf ball sized gravel. Those planning to go far, it’s worth shopping around for one in decent condition. Strike out in the morning or later in the afternoon to avoid the midday heat and try to return before dark. Even aided by a torch, cycling those paths at night can be hairy.

We’ve covered terra firma, now it’s time to get onto the water. By far the most popular Don Dhet activity (aside from marathon hammock sessions), are the cheap kayak trips which any agent in the tourist strip or guesthouse can book. It will be run by one of two companies, both comparable to each other. These trips usually include kayaking, lunch, dolphin spotting, a visit to Khone Pha Pheng waterfalls (the largest, by volume, in Southeast Asia) and another small waterfall — sometimes a seller will claim it is Li Phi when it is usually another falls, saving the operator the price of admission and keeping the tour price attractively low. Trips are as cheap as 170,000 kip. Khone Pha Pheng can also be visited independently.

One of the main draws to the 4000 Islands used to be the chance to spot the Irrawaddy dolphin in the waters along the Cambodian border. It was home to one of only two pods remaining in the entire river (the second area being Kratie). Boat trips will most likely be fruitless now that the dolphin has been declared functionally extinct (the current population can no longer viably sustain itself). Even if they are still alive and flipping, we were told the explosions from upriver damming scare them off.

If you have your heart set on it, trips are offered by travel agents (half day with Khone Pha Pheng, 150,000 kip per person) or go to Don Khon at either Ban Hang Khone village (at the old port) or the beach at the southwestern corner of the island (south on the road past Li Phi). It’s 70,000 kip for a boat for an hour, maximum three people. Keep in mind that if you go for sunset, you’ll be cycling back in the dark.

A sunset boat trip is a fantastic way to end the day and it’s as easy as showing up to the Don Dhet boat landing at 16:30. With others a shared boat is 40,000 kip per person. If that fails, arrange a private one. Try for 60,000-70,000 kip. If you need a middle man to organise, travel agents quoted us 80,000 kip, more for a boat with a roof. Being on the Mekong at sunset is magical, especially if the boat captain moors into one of the tiny “islands”, no more than reeds poking out for the water. In the stillness you can truly appreciate the tranquility and vastness of the Mekong.

Longer boat trips will cover more ground, so to speak. For a guided two hour boat trip, including stops on some of the islands, we were quoted 150,000-200,000 kip.

Those hoping to experience real Lao life on Don Dhet and Don Khon, sorry to disappoint but this is not the place. However, few make the time and effort to visit the other islands like Don Som and Don Loppadi which are actually visible from Don Dhet. There’s no tourist accommodation there and residents live a far more traditional way of life revolved around fishing and rice growing. From the boat landing it’s 10,000 kip to Don Som, 15,000 kip with a bicycle. It’s the best way to see some real island village life. Try to arrange a time for the boatman to pick you up, though most families on the island have a boat and with some charades you can usually hire someone to shuttle you back.

Those travelling with their own motorbike or bicycle, instead of relocating via the main highway, how about island hopping? Go from Don Dhet to Don Som and at its northern tip get another boat to Don Khong.

When things get hot the river is the place to cool off. In dry season (November to May), head to any beach or river bank access point. Ignore silly signs that say river access is only for a certain guesthouse. If in doubt, look where the locals go for their end of day bath.

Tubing in Don Dhet is a relaxed affair, nothing like the wild days of tubing in Vang Vieng. Inner tubes can be rented for 10,000 kip at shops in town. Start at the northern tip and float down, stopping before the bridge between Don Dhet and Don Khon as suddenly there are stronger currents and a set of rapids before sweeping into Li Phi waterfall — Li Phi means “ghost/spirit trap” for a reason. Make arrangements for a pick up if you don’t want to haul the tube back three kilometres by foot. A convenient alternative, hire a boat at the landing to take you north for a float down back to Don Dhet. Agents can organise this drop off or pick up system for 40,000 kip per person with a group of three or more.

The main beach is Don Dhet’s boat landing, which isn’t such a pleasant or private place to hang out. In dry season, the beach at The Last Resort and Easy Go Backpacker is a popular spot, with plenty of room to spread out some towels. The Last Resort hosts beach parties, cinema nights and bonfires.

Some of the best beaches are on Don Khon. Kill two birds with one stone: after gawking at Li Phi waterfall, follow the signs to the beach. In dry season, there’s a great little set up with bar, restaurant, loungers, volleyball and huts. Half a day can easily be spent relaxing here. Otherwise, back on the main road to Li Phi, continue south until the trail drops down to a beach that will most likely be empty except for a few shops, the people waking only to ask if you want a dolphin boat trip before resuming their nap.

Needless to say, get into the river only if you are a confident swimmer. Also, rivers plus alcohol/drugs do not mix. The Mekong here is relatively clean (swimmable, not drinkable), the colour due to silt not industrial pollutants. Swimming is trickier in rainy season—it’s high volumes and strong current. Do not go in if you have any doubts.

Finally, we’d normally give a spiel about how Laos is a conservative country and skimpy clothing and bikinis are inappropriate. In anywhere else in Laos we’d recommend for women to wear a top over their swimmers. However, it’s become so commonplace that locals don’t even bat an eyelid at a two-piece. Sunbathing nude is still a no-no. 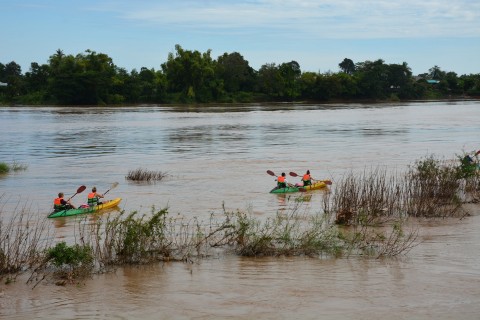 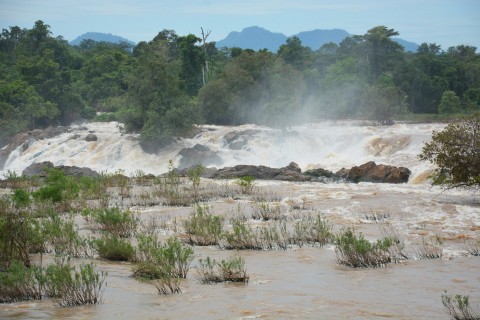 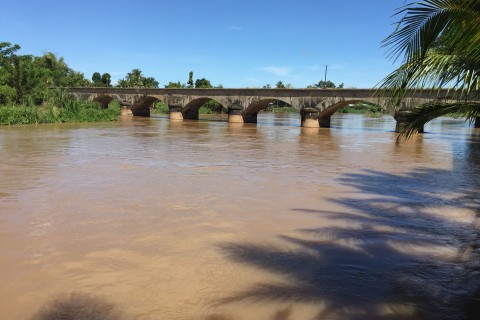