It’s bungalows and hammocks galore but over a century ago, Don Dhet and Don Khon were more than a lazy backpacker idyll. It was a battleground where ambition clashed with nature as the French tried to create a passage for their colonial empire through Indochina.

Visit Khone Pha Pheng, Li Phi or Khone Pa Soi waterfalls and you’ll understand the tremendous obstacle to this dream, over ten kilometres of rocks and rapids. Spoiler alert: nature eventually won, but not before the French had a short period of success.

From their stronghold in southern Vietnam and Cambodia, the French wished to create a link to China as a way to move goods as well as help establish control over the region. In 1893, creating a passage became a matter of necessity as a dispute with Siam over the eastern banks of the Mekong had France scrambling to move gunboats above Khone falls to secure control.

By 1894, a railway through Don Khone was completed connecting the port at the southeastern tip to the northwest coast. This was the beginning of a rather short-lived heyday for the rail. Messageries Fluviales de Cochinchine soon upgraded the infrastructure. With cargo and tourists beginning to arrive at the turn of the century, in 1910 they extended the railway two kilometres into Don Dhet as well as built the 158 metre long bridge connecting the two islands. The result was a seven-kilometre long railway. The need for it dried up in the 1930, though it was used by the Japanese during occupation in World War II before nature reclaimed it. It’s still possible to see remnants of this interesting piece of exploration history and a few spots are worth seeking out as travellers wander the island.

The bridge is the most obvious relic and it remains the only one connecting to two islands. With 13 elegant arches, the bridge is typical of 19th century French architecture, a striking sight against the line of tropical palms. Just across the bridge on Don Khon, there is a section of the track and one of the steam locomotives on display. The signage gives history of the endeavour, with archive photos to help bring the story to life. Imagine the failed expeditions to bring steamers up the rapids or the conditions 500 Vietnamese workers faced in clearing the jungle for the rail (many did not survive). You can walk along the railway trail though there is no physical track left and much of it is overgrown or now rice fields.

The port is located in Ban Hang Khone village—take the road that starts north of the French bridge and bisects the island to the southeast tip. The way is bumpy and pretty as it cuts through rice paddies before it enters a green tunnel through the forest. In addition to an expansive view of the Mekong, there is another locomotive on display and you can still see the pier including ramp, pulley system and engine room. Signage here tells the story of the first steamer to ever conquer Khone falls. It took Norwegian Peter Hauff and a crew of 11-men five-days of inching, winching, tying the freighter to trees and hauling it up to complete this achievement.

There are a couple more glimmers of history. Built in 1896, one of the buildings of Sala Done Khone Hotel was once the headquarters of shipping/timber trading company Les Messageries Maritimes. Some infrastructure remains at Don Dhet’s port which was the railway’s northern terminal. It’s located in the middle of its eastern coast, south of the majority of the accommodation. Today it’s used as the pier for tour groups arriving from Pakse. 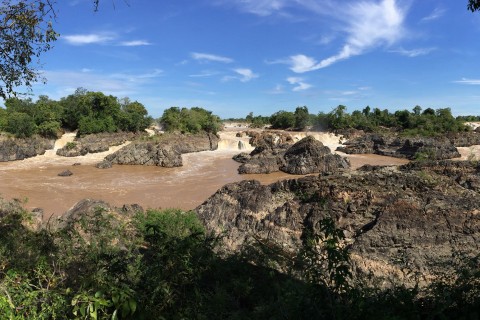 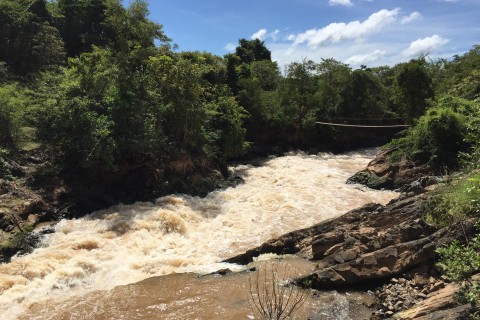 Smaller and harder to reach