A slice of southern India in Chinatown
Published/Last edited or updated: 8th December, 2017

The largest and oldest Hindu temple in Kuala Lumpur, Sri Maha Mariamman Temple is surprisingly located on the western edge of Chinatown rather than say Little India or Brickfields and it is well worth setting aside some time to visit.

The temple was founded by K. Thamboosamy Pillai a prominent Tamil who was born in Singapore in 1850, educated at Raffles and was eventually dispatched to Klang in 1875. After some time he left government service and got into tin mining in a big way and became exceptionally wealthy. The acknowledged leader of the Tamil community in Kuala Lumpur, he founded the original temple in 1873 as a private family shrine, moving it to the current site in 1885. Later, after his death in Singapore in 1902, the temple was opened to the general public in the 1920s.

In its earliest days, the temple was made of attap (thatch made from coconut palms) but this was demolished in 1887 and replaced with a brick structure. This in turn was demolished to make way for the current temple in 1968, with the impressive towered gateway added in 1972.

The central shrine is dedicated to Mariamman, with Ganesh to the left and Lord Muruga to the right. Further alters are in the rear corners of the site. Observe not just the photogenic sculpture layered upon all five levels of the tower, but also the decorative rooflines and walls. The temple can get very busy with both devotees and tour groups, but late afternoon can be a good time to visit if you’d like the place a bit more to yourself.

The busiest time of the year is Thaipusam, when a silver chariot is wheeled out to in the early morning to transport Lord Muruga to Batu Caves. Deepavali is another very busy time at the temple.

Sri Maha Mariamman is just a short walk from central Chinatown and the closest LRT station is Pasar Seni. Allow 30 minutes for a visit. You need to take your shoes off before entering—there is a shoe closet which will store them for you for 20 cents. 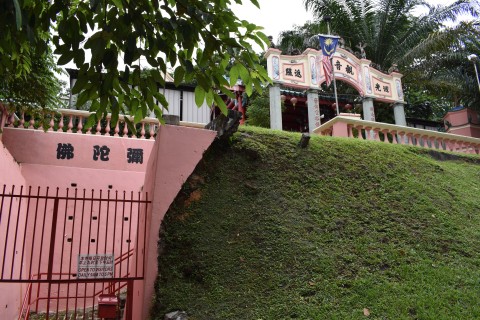