The streets and alleyways of Chinatown on the west bank of the Melaka River are the nerve centre of Melaka and the UNESCO World Heritage-listed city’s most fascinating area for a wander.

Begin from the river along Heeren Street (officially Jalan Tun Tan Cheng Lock), formerly Heeren­straat or “Gentlemen’s Street” and the address of the upper-crust since Dutch times. From the mid-18th century to the early 20th century this was the choice neighbourhood for wealthy Straits Chinese (Peranakan) who had made it big in the rubber trade. Many of the flamboyant “Chinese Baroque” homes have been restored and converted to hotels, guesthouses, antique shops and museums.

One interesting feature of the houses here is that they are relatively narrow, but can stretch back some 50 metres or more; they were built this way to minimise tax calculated on street frontage at the time. Interior open courtyards provide ventilation and light. At number one, Heeren House was formerly a warehouse, and is now a simple guesthouse and cafe. What’s interesting about this relativity modest building is the addition of shuttered windows along its side, a bonus river view for guests.

The grand four-storey house at number five has been beautifully restored, and hiding behind the gilt door is Melaka’s finest boutique hotel, unambiguously called 5 Heeren. If it’s within your budget (or even if it’s not), we recommend a splurge. Note the ceramic phoenix and peonies above the awning, decorative motives commonly used by Peranakans—the phoenix symbolising harmony and luck, and the peonies for prosperity. This style of three-dimensional mosaic work is called chien nien or ceramic cut-and-paste shardwork.

The shophouses in this area are some of the oldest urban dwellings in Malaysia. To preserve their integrity, the Heritage Trust of Malaysia has restored the house at 8 Heeren Street as a practical example for future conservation of similar structures. The two-storey building was built in the 1700s during a time when the Dutch imposed comprehensive building regulations, with everything from the size of the bricks and tiles strictly controlled. The project is open to the public as a museum of sorts. Informative signage and photos walk you through the project, with friendly staff on hand to answer questions. A small selection of books on Melaka’s heritage is on sale.

Three adjacent shophouses from 48 to 52 were once the ancestral mansion of Baba Chan Cheng Siew (1865-1919), a wealthy Peranakan planter. This is now one of Melaka’s best museums showcasing the lifestyle of the well-heeled Straits Chinese at the turn of the 20th century. The Baba and Nyonya Heritage Museum offers hourly guided tours, the best way to view the collection.

If the Baba and Nyonya Heritage Museum has piqued your interest in Peranakan culture and you’d like to pick up a few trinkets or completely refurnish your house, Red Earth Collection at number 65 sells colourful reproduction Peranakan ceramics among other desirable objects and Malaqa House at number 74 is full of Chinese antiques and furniture. Both are worth a browse.

At number 87, Casababa Gallery offers some fun for your Instagram feed: Here you can dress up as a Baba or Nyonya in traditional Peranakan attire and pose in an authentic setting. It’s BYO camera and you’re able to make multiple costume changes.

Love the garb and want to add to your wardrobe? Sixty 3 Heritage will dress the most discerning Nyonya from head to toe. This local chain sells beautiful batik sarongs and embroidered kabayas as well as Peranakan beaded shoes and knick-knacks. Find the shop at number 90 (they also have a branch at number 63). For an unusual souvenir, Wah Aik at number 92 makes tiny handmade shoes for bound-feet or “lotus feet” as they were called. If your shoe size is a little larger, pick up a pair of kasut manek, made-to-order beaded shoes. Across the road at 93, Abdul Antiques is an Aladdin’s cave for antique lovers.

The Straits Chinese Jewellery Museum at number 108 showcases the best of Nyonya and Baba bling along with displays of tools of the trade and other fashion items. The guided tour leads you through the furnished rooms, including an ancestral worship hall in this elegantly restored Peranakan house, well worth the entry fee.

Unusually set back from the street at number 117, the Chee Ancestral Mansion is the grandest house on the grandest street. The palatial three-storey building rather fancifully incorporates Chinese and European elements, painted white with pale green and pink filigree. It has a central tower topped with a dome that at one time made it the tallest building in Melaka. Built in 1925 by tycoon Chee Swee Cheng in honour of his grandfather, Chee Yam Chuan, the building serves as a family shrine. The monogrammed gate “CYCT” stands for “Chee Yam Chuan Temple”. The Chee family have a long lineage in Melaka and their business concerns have included everything from opium to ice (the frozen water kind). The building is not open to the public and functions as a hall for family meetings, ancestral worship ceremonies and family festivals.

Across the road at number 118, elegant Hotel Puri was the ancestral home of Tan Kim Seng, a wealthy merchant and philanthropist whose donations supported the development of Singapore, funding public waterworks, schools and hospitals. He was just as magnanimous in Melaka, where he built the bridge that leads from Chinatown to Dutch Square. The stately home was built in 1822 and extensively renovated in 1876. Before it was again renovated and extended to become the present day hotel, the home was 100 metres long and housed a menagerie that included a tiger. Take a break in the hotel’s lovely open courtyard cafe and browse in the history room, a mini-museum. For more Peranakan elegance, at 121-127 wander into the lobby at Baba House, another hotel just ahead.

Continue to 122, the Eng Choon Association, where curling carved dragons and bearded door gods guard the entrance to this richly decorated Chinese clan house. Built in 1800 for descendants from the Eng Choon district of Fujian, this is one of the oldest clan houses in Melaka. Among the members of this association are the family of Tan Kim Seng of nearby Hotel Puri fame.

Continue to the corner and turn right into Jalan Kubu, and right again into Jonker Street, officially Jalan Hang Jebat (you’ll see the archway with “Jonker Walk”). Jonker comes from the Dutch, Jongheer for “young man”, an address for those who hadn’t quiet made it to the millionaires’ row of Heeren Street. On Friday, Saturday and Sunday nights from 18:00 the street is closed to traffic for the popular Jonker Walk Night Market. On your right you will see the small Kwan Yin (Guanyin) Temple dedicated to the Buddhist Goddess of mercy, open daily 07:00 to 17:30.

Just ahead the road splits; take the right fork. About 130 metres ahead on your left is the Hang Kasturi Mausoleum. Don’t blink or you’ll miss the white arched entrance. Influenced by Indian architectural style, the unusual stepped tomb is topped with eight chess-piece-like pillars and embellished with small triangular niches used for oil lamps—compare it with the Sri Poyatha Venayagar Moorthi Hindu Temple later on the walk. The small courtyard is shaded by a frangipani tree, common in Muslim cemeteries (this gets a mention, as does Melaka, in Tash Aw's lyrical novel The Harmony Silk Factory.) Hang Kasturi was one of a band of five great warrior brothers (or brothers-in-arms) in the court of 15th century Sultan Mansur Shah. He along with Hang Tuah, Hang Jebat (whose mausoleum we will visit later on this walk), Hang Lekiu and Hang Lekir were masters of the Malay martial art, silat. Stories of the brothers' legendary escapades feature in the Sejarah Melayu (Malay Annals) and the tales are well known by Malaysian schoolchildren.

Next door to the Mausoleum is a very small Chinese temple, Thean Teik Keong Temple, associated with the larger Cheng Hoon Teng Temple. Thean Teik Keong translates to “Temple of Heavenly Virtue” and the principal deity worshipped here is the Taoist Goddess Zhu Sheng Niang Niang, believed to be a “spiritual midwife” the protector of conception, pregnancy and childbirth, in charge of choosing parents for souls to be reincarnated.

Next door is the entrance to Kampung Ketek, a traditional Malay kampung (village). It was formerly called Kampung Pali, and was the birthplace of writer Munshi Abdullah (1797–1854), considered the father of modern Malay literature. Wander into the village to see the traditional wooden houses and the Mausoleum of Syamsuddin Al-Sumatrani, a 17th century Acehnese General who died during a military attack against the Portuguese in Melaka. A number of smaller graves nearby are also believed to be Acehnese soldiers.

Back out on Temple Street, Cheng Hoon Teng Temple (Temple of the Bright Clouds) is Malaysia’s oldest Chinese temple, dating from 1646 and one of Chinatown’s most impressive buildings. Wander around the courtyard to admire the detailed ornamentation that earned a UNESCO award in 2000. A row of shophouses alongside the temple sell Chinese religious items including contemporary joss paper effigies in the form of electronics, beer cans, cars, sewing machines and other things that may be of use in the afterlife, ritually burnt to venerate the departed.

A little further along the street you’ll encounter the architecturally eclectic Melakan-style Kampung Kling Mosque. This historic mosque was built in 1748. The Sri Poyatha Venayagar Moorthi Temple next to Kampung Kling Mosque is possibly the oldest Hindu temple in Malaysia, built in 1781 by Melaka’s Chetti community (Peranakan Malay-Tamil). The simple bright painted pagoda is hard to miss.

At the next corner, turn left into Jalan Hang Kasturi, and notice the street art in the lanes. Take a right onto Jalan Kampung Kuli, and Hang Jebat’s Mausoleum will be on your left. Hang Jebat was another warrior in the legendary quintet along with Hang Kasturi, whose mausoleum we visited earlier. The information at the site offers three slightly different versions of the tale of his demise, however the consensus is that he was executed at the hand of his brother, Hang Tuah. The tomb sits within a small walled garden with the head of the tombstone covered by a square roofed pavilion. Other unnamed tombstones are nearby.

From here take a short detour to Kampung Hulu Mosque or alternatively, continue in a loop around Chinatown. To walk to the mosque, return to Jalan Hang Kasturi, head towards the river, turn left into Jalan Kampung Pantai, and Kampung Hulu Mosque is 250 metres ahead on your left opposite 906 Riverside Hotel. Similar in style to Kampung Kling Mosque, this older mosque dates from 1728, and is likely the oldest in Malaysia.

Return to Hang Jebat’s Mausoleum and walk towards Lorong Hang Jebat, turning left at the corner. Just ahead on the opposite side of the road at number 82 is House of Museums: Old Trades Gallery. This excellent small museum recreates vignettes of trades operating in Melaka from the 1950s to 1970s. Walk though the “shops” of a bygone era, including a pharmacy, cinema, barber and tailor.

Returning to the street, head southwest towards Jonker Street. On the corner of Jalan Tukan Besi you may want to stop at The Orangutan House, local artist Charles Cham’s private studio-gallery. Pick up an original painting or choose from a selection of T-Shits in his unique drawing style, full of local humour.

Continue along Lorong Hang Jebat to the Cheng Ho Cultural Museum, where you can learn about the life and escapades of the man who put Melaka on the map, Chinese Ming Dynasty Admiral Cheng Ho (1371–1433). Take your time, there’s a lot to read!

From here wander up Jonker Street and sample some of Melaka’s delicious culinary treats, cross the river to explore the colonial district or meander up the riverside to the traditional Malay village of Kampung Morten. Return to Jonker Street Friday to Sunday evenings for the Jonker Walk Night Market. For more history of the Chinese in Melaka, head over to Bukit Cina. 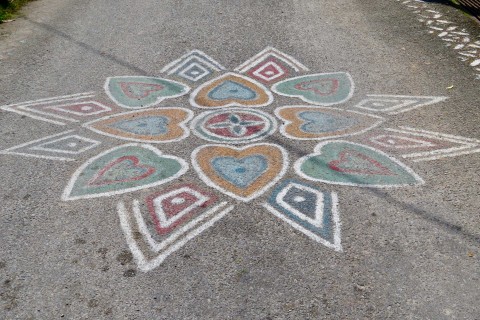