Dominating the hillside overshadowing the town of Air Itam, west of Georgetown, imposing Kek Lok Si is hyped as the largest Buddhist Temple in Malaysia.

Translated from Penang Hokkien as the Temple of Supreme Bliss, its ornate mishmash of architectural styles with multi-tired wedding-cake like pagodas, a rainbow of garish colours, multitude of Buddha statues and a mixture of Chinese, Thai and Burmese influences may have the opposite effect on purists, it’s nevertheless impressive and one of Penang’s iconic and most visited attractions.

Chinese abbot Beow Lean came to Penang with the intention of collecting funds for the renovation of a temple in China, but was instead appointed as the resident Abbot at Penang’s Goddess of Mercy Temple and later set about establishing Kek Lok Si. Construction of the complex began in the late ninetieth century and was funded by five main local Chinese benefactors including Cheong Fatt Tze of Blue Mansion fame and Chung Keng Kwee, who at one time owned what is now the Pinang Peranakan Mansion. Officially opened in the early 1900s, further structures have been added over time, expanding the complex, and indeed this project seems ongoing as renovations and new building continues today.

The “official” entrance takes you past the ironically named Liberation Pond—a murky green pool filled with hundreds of captive tortoises and where a sign reads “strictly no liberation of tortoises into the pond”. The path then continues up several flights of covered stairs past rather secular souvenir and trinket sellers. To avoid the stairs (and the stalls), continue winding up the hill along Jalan Balik Pulau, and at a bend in the road, an arched gateway leads to the main entrance pavilion.

The complex houses several prayer halls and pavilions stepped up the hillside and punctuating the sacred at every level are mercantile emporiums selling religious paraphernalia. Two notable features, and the crowd pullers of the temple are the Ban Po Thar Pagoda, or Ten Thousand Buddhas Pagoda and a massive statue of Guanyin, the Goddess of Mercy.

Although the main temple is free to enter, a small charge is levied to visit these popular areas to help with upkeep. A two ringgit donation gets you into the pagoda in the centre of the complex and a narrow staircase winds up the seven-levelled structure. We didn’t confirm that there’s actually 10,000 Buddhas, but walls are embedded with an army of Buddha images, and large statues adorn every level.

Particularly beautiful are a collection of Burmese-style alabaster figures, but various styles of bronze and gold likenesses also take pride of place on the multiple altars. Pale green and pink lotus patterned cement tiles are also noteworthy and a contrast with the chipped and broken public-restroom-style shiny tiles covering much of the pagoda. Renovations were ongoing when we visited, and these may be repaired or replaced.

The pleasant cooling breeze and views from the open archways offer an ambience conducive to contemplation as you huff and puff to the top. An inclined lift, rather like a single-carriage funicular, is a fun way to access the Guanyin statue, this short glass-box ride costs three ringgit each way and offers good views along the incline (operates: 08:30–17:30).

An anecdote recounts that the bronze statue was originally intended to be 120 metres tall, however local authorities were not happy about it possibly overshadowing the State Mosque and a height limit was imposed—nevertheless at around 30 metres, she’s still impressive. Oddly a number of small stone sculptures of Disney characters pepper the surrounding courtyard, and obviously someone else thought that they were somewhat inappropriate as Donald Duck had been decapitated when we visited.

The temple complex also encompasses a number of lovely gardens and ponds as well as a vegetarian restaurant (open: 09:30–18:30). Allow at least an hour to have a decent look around, and if you’re a shutterbug, double that.

Kek Lok Si Temple is open daily 08:30–17:30 and is particularly lovely to visit during Chinese New Year celebrations when it remains open until later in the evening and the entire complex is illuminated by coloured lanterns.

Combine a trip to Kek Lok Si with a visit to Penang Hill—it is a further two-and-a-half kilometres to the Penang Hill funicular station. Other Buddhist temples in Penang include Thai Wat Chaiyamangalaram with a large reclining Buddha and across the road, Dhammakarama Burmese Buddhist Temple, both on Lorong Burma in Pulau Tikus. 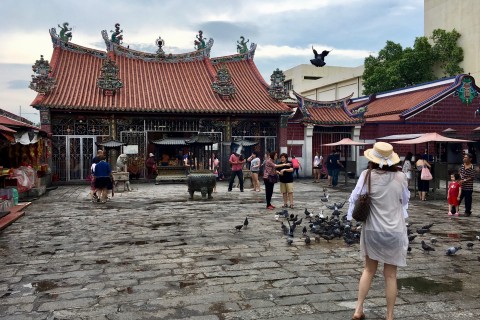