For island-hopping fans, it’s safe to say Langkawi might be a dream destination. With 99 to 104 islands, depending on the tide, comprising the archipelago of Langkawi, there are certainly plenty to choose from. But not all of the islands are accessible (or passable) due to sheer rock formations or dense jungle. And other than the main island of Langkawi itself, only three allow you to stay without special permits or arrangements: Pulau Rebak, Pulau Dayang Bunting and Pulau Tuba.

So many islands, so little time.

A standard, basic three-island-hopping excursion is a bargain at 35 ringgit per person, including transfers. This three- to four-hour tour includes a stop at Pulau Dayang Bunting, in the Dayang Bunting Marble Geoforest Park where the Lake of the Pregnant Maiden awaits. The southern islands itinerary also includes a drive-by of the popular eagle watching area of Pulau Singa Besar and a nice beach stop at Pulau Beras Basah. Unfortunately, those gorgeous white sands come with plenty of other island-hopping boats and their passengers.

There’s a beach around here somewhere.

Although Pulau Singa Besar is now considered a wildlife sanctuary under the command of the Forestry Department, one tour company has been granted special permits to offer day tours to the area, inclusive of a beach barbecue. A six-hour, non-guided jungle trek around the island is 175 ringgit and a four-hour leisure island drop is 125 ringgit.

Booking direct is often more cost effective, but for the island-hopping smorgasbords available, booking through a travel agency can help you avoid confusion or miscommunication. Pantai Cenang-based MegaWaterSports are a solid resource — they also offer jet ski island-hopping jaunts.

A higher end educational three- to four-hour island-hopping option is the southern island Geopark tour available through JungleWalla at 800 ringgit per boat, with a maximum number of six passengers. This tour comes with a licensed nature guide and includes exploring Pulau Ular, Pulau Lalang, Pulau Dayang Bunting and a stop at one of Dayang Bunting’s secluded beaches on either Teluk Ayer Taun or Teluk Cawi.

On the north side of Langkawi, the Kilim Karst Geoforest Park is an even more popular boat launching area with the jetty located smack dab in the middle of the mangroves. The nearby offshore islands boast incredible geological formations as well as a few choice caves.

The island-hopping treasure map can come in handy.

There are plentiful boatmen at the Kilim Jetty in Ayer Hangat, as well at Tanjung Rhu jetty near Tanjung Rhu Beach, but you might be hard pressed to find one who speaks English. Therefore private hire negotiations can become challenging, especially if you want to hire a boat and follow your own itinerary. If you have plenty of time to shop around, head out to either jetty early in the morning and you could be sea bound right away, or be told to come back tomorrow. Allowing a good travel agent to handle the translations might work out best.

In case you get lost.

We were quoted as low as 100 ringgit per hour with an understanding we’d take at least two to three hours, which isn’t a bad deal, especially if you can find a few fellow travellers to split the cost. A few favourite spots in the area are Pulau Anak Tikus and Pulau Langgun. There are also a few caves, some of which can only be reached when the tide is right.

No shortage of boats at Tanjung Rhu Jetty.

Several northern island-hopping packages are offered at prices ranging from 250 for an hour to 500 ringgit for a solid four hours. However, most include what would normally be on a proper nature guided mangrove tour anyway. This in itself is a specialty tour and we highly recommend you go with a reputable nature company, such as Dev’s Adventure Tours or JungleWalla. 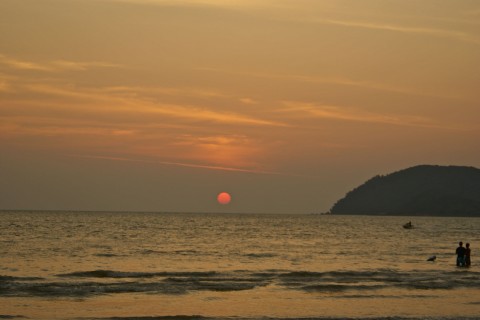