Commemorating Australian and British prisoners of war who died during the infamous Sandakan Death Marches to nearby Ranau, Kundasang War Memorial is worth a stop as you pass between Kinabalu Park and Poring or Ranau.

It's particularly interesting for anyone keen on the World War II history of Sabah, or North Borneo at the time. In 1945 Japanese captors forced the allied POWs to march the 265 kilometre stretch which resulted in the deaths of 2,428 soldiers, widely considered to be one of the worst atrocities of the war. The memorial also remembers local Sabahans who suffered trying to assist the captives. The site was selected in the shadow of Mount Kinabalu, as according to local beliefs, the mountain harbours the souls of the dead.

Four peaceful, manicured gardens constitute the memorial: an Australian, English and Bornean garden each with various native plantings; and a Contemplation Garden with a reflecting pool and black granite plaques inscribed in gold with the names of the soldiers that died. The serene and poignant atmosphere is fittingly reverent. The memorial also displays a collection of newspaper clippings and memorabilia and a brief documentary film on the history of the Sandakan Death March can be viewed.

Kundasang War Memorial doesn’t receive any government funding, and your admission fee is used for its maintenance. A mountain and much more 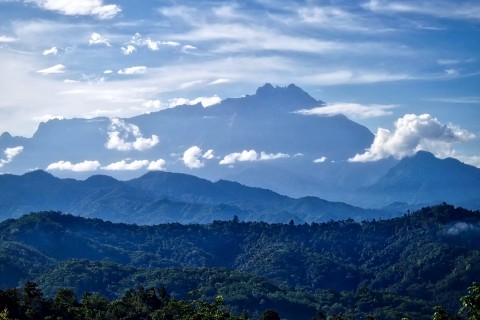 The reason you came