Get ready for a climb
Published/Last edited or updated: 21st June, 2020

Wat Yai Chai Mongkhon is one of the more widely visited sites off the island, and for good reason. Established as a meditation and study centre by King Uthong shortly after the founding of Ayutthaya, the monastery became more closely associated with King Naresuan after he erected a massive stupa here in commemoration of a pivotal Siamese victory over the Burmese in 1592.

First established with help from monks ordained in Sri Lanka during a period when Sinhalese-style Theravada Buddhism was becoming hugely popular in Siam, the temple went on to serve as monastic residence of Ayutthaya’s supreme patriarch monk. This led to an alternate name: Wat Chao Phraya Thai, or Lord of the Thais Temple.

According to legend, King Naresuan single-handedly slayed his Burmese counterpart in an elephant duel to end a war in the late 16th century, after which he commissioned construction of the towering bell-shaped stupa that still stands today, albeit with a slight lean. An artist’s depiction of Naresuan’s victorious duel can be seen in the ordination hall.

Have a look inside.

Built from brick and plaster in the Sri Lankan style, the 72-metre-tall stupa can be seen from all over town and is the only one of its kind that still stands in Ayutthaya. A steep stairway leads high up to the top of the colossal base, where a crypt houses several Buddha images. Make a 20-baht donation in exchange for pieces of gold leaf to place on each image for good luck, and then head outside to enjoy the views.

Fronting the stupa is a large seated Buddha image — stop midway up the stairs for a great shot of only the Buddha’s head framed by bricks and sky. Dozens of smaller seated Buddha images rim the complex and, unlike many in Ayutthaya, still have possession of their heads. There’s also a large reclining Buddha that serves as a primary place for Thais to light incense and bow three times in honour of the Buddha, Dharma and Sangha.

Beauty in all the corners.

Wat Yai Chai Mongkhon has always been a working monastery and today it houses many monks in Thai-style wooden houses across the car park. Quite a few foreigners make it here and the temple is an extremely popular pilgrimage site for Thais, so it does get crowded. Be respectful by covering up your shoulders, stomach and thighs.

Follow Rochana Road over the bridge to east Ayutthaya and take a right on Route 3477 at the huge roundabout with Sam Pluem Chedi at its centre. Wat Yai Chai Mongkhon will be about a km down on the left. If you make it here, be sure to go another kilometre down the road to Wat Phanan Choeng. 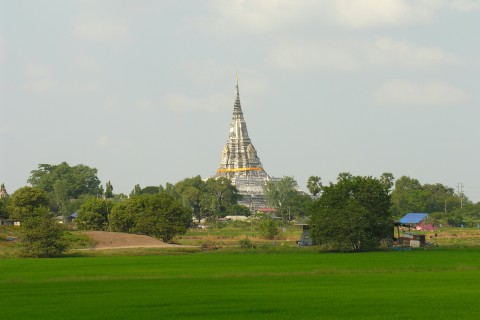