King Rama IV founded Wat Pathum Wanaram in the mid-19th century to complement a royal palace that was demolished in the 1930s. Now it’s a calming Buddhist complex squeezed between Thailand’s two largest shopping malls amid the unabashed materialism of Siam Square.

The temple is commonly known as Wat Pathum (Lotus Temple) and goes by the alternate name of Wat Sra, after the name of the palace, Wat Sra Pathum. All that’s left of a large lotus pond is a murky oval of water out front near a car park. Locals come to wish for health and prosperity while burning incense at a Buddha shrine beneath an old Bodhi tree nearby.

Step through the thick gates to the temple’s more tidy section to find a white chedi that we envisioned to be a middle finger of elegance facing the concrete walls of Siam Paragon, on one side, and Central World, on the other. The top of Baiyoke Tower II, Bangkok’s second tallest building, looms above the chofa finials that top the gabled roofs of the small wihaan and ordination hall.

Inside the wihaan sits Phra Som and Phra Saen, small Buddha images that were carted to Bangkok from Laos after a Siamese invasion in the early 19th century. The silvery Phra Sai Buddha image sits in the smaller ordination hall in front of an unusual green and blue background. Together these two buildings display detailed murals of lotuses, royal barge processions along with ornate golden door carvings depicting celestial being draped in vines.

During the bloody Thai military crackdown on “red shirt” protests on 19 May 2010, Wat Pathum hosted a field hospital and was considered a safe zone until bullets rained down and killed six civilians, including a nurse. Many people blame the military, but no one has yet been held accountable.

Every year on the anniversary of the crackdown, family members and supporters of those who died turn up at Wat Pathum to hold a vigil and draw attention to what they claim was a government-sanctioned injustice.

Though Wat Pathum is not one of Bangkok’s most impressive temples, the Rattanakosin-period structures are worth a quick look, if for nothing else but to take a break from the malls. Afterwards you could cross Rama I Road to check out the Erawan Shrine, another incense-filled religious site in the middle of the shopping district with its own violent past.

Wat Pathum Wanaram is located off the north side of Rama I Road and you can’t miss it when strolling between Siam and Chid Lom BTS stations along the skywalk, from where a stairway runs down close to the temple gate. 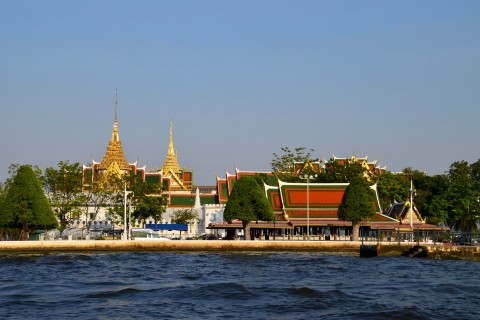 Worth battling the crowds to see