Visiting some of Chanthaburi’s temples, churches and shrines is a fascinating way to get a sense for the area’s cultural diversity. Four sites are easy to include on a stroll around the Chanthaboon old town, and we’ve added four more that you might sprinkle in while on day trips elsewhere in the province.

Cathedral of the Immaculate Conception
Anchoring a community of Vietnamese-Thai Catholics, this striking gothic edifice stands as the city’s most noticeable landmark. A French mission was first established here in 1711 and the site remained active during the French occupation of 1893 to 1905, with the current structure completed by Vietnamese in 1909. The nave features marble floors and depictions of saints in the stained glass windows. Out in the courtyard, thousands of sapphires adorn a statue of the Virgin Mary that collects offerings of flower garlands, as though it were a Buddhist or Hindu shrine.

The first Vietnamese arrived in Chanthaburi in the 19th century after fleeing persecution in Cochinchina (southern Vietnam), and two more waves followed in the 20th century in response to French colonialism and, later, the communist takeover that followed the American War. The local Vietnamese have assimilated in many ways and mass is now conducted in the Thai language. The nave is usually locked; to look inside you’ll have to attend mass or inquire at the church office for a private tour. The cathedral stands on the east bank of the river and is easy to reach via a footbridge from Chanthaboon old town.

Wat Khetnaboonyaram
Also known by the Vietnamese name of Chua Phuc Dien, this 200-year-old pagoda in the heart of town displays that not all of Chanthaburi’s Vietnamese-Thai residents adhere to Catholicism. A dragon-studded gate leads to the inner sanctuary featuring several images including Amithaba, the buddha worshiped in Pure Land Buddhism; Kuan Yin, the goddess of compassion; and Maitreya, the chubby future buddha. This is not a major site but we think it’s worth a quick stop to cool off halfway down the old town lane.

Topping the front exterior wall is an image of Garuda, Thailand’s national emblem, which hails from Hindu mythology. It joins the seal of King Rama V, who sanctioned a restoration in the early 1900s that added Thai design elements, such as mother of pearl and lacquer designs on windows. “Wat Khet” is easy to find between Sukhapiban Road and Benchamarachutit Road, just north of Phokasiri Market.

Wat Bot Muang
This Thai-style Theravada temple was established during the late Ayutthaya period on a hill above the northern end of the Chanthaboon community, making it one of the oldest wats in town. Built in the Sri Lankan style, its gold-painted bell-shaped chedi and wihaan sporting Indian-style murals tower above the old town and often appear in photos of the river.

The unlikely highlight is a roughly thousand-year-old sandstone lintel from the Baphuon school of Khmer art, depicting Indra riding the three-headed elephant Erawan. It appears to be in good shape despite being placed out in the open air at the centre of the grounds. To reach the wat you can enter on Benchamarachutit Road or take a stairway up from the north end of Sukhapiban Road. It’s worth a quick peek as you start a wander through the old town.

King Taksin Shrine
Just northwest of the old town on Thaluang Road, a busy shrine to King Taksin is set beneath a roof that mimics his signature pointed hat. Inside sits a brass image of the king, who, while still a general, came to Chanthaburi to regroup after the Burmese took Ayutthaya in 1767. With fresh supplies and newly enlisted soldiers, he returned to lead the Siamese to victory and preserve independence for the kingdom that would later become Thailand. Taksin was half Chinese and many of those who fought for him were of Chinese descent as well.

Drawing locals and Thai tourists who often make this their first stop in Chan, the shrine is surrounded by flowers, candles and statues of fighting cocks, a symbol of strength associated with Taksin. Next door is the related City Pillar shrine with its Chinese-style dragons and a fountain featuring the fruits that Chanthaburi is famous for. We’d not lose sleep about missing these shrines, but they’re worth a peek if you want to see the local fervour for King Taksin first hand.

Wat Phlap
This late Ayutthaya period wat features a towering mondop topped by a Khmer-style prang with detailed images of Indra and Erawan on all four sides. The leafy grounds also host a centuries-old teak ho trai (scripture hall) and a couple of bell-shaped chedis beside a pond. Our favourite part is the 350-year-old wood wihaan housing images of the hermit Ruessi alongside an emaciated Buddha image, representing his pre-enlightenment days of self-inflicted starvation.

Wat Phlap is worth a visit and you can hit it in conjunction with the nearby Khai Noen Wong historical site and Wat Khao Ploi Waen; this trio of sites combine for a good day out for culture enthusiasts. From Chanthaburi town, which is seven kilometres to the northeast, take Highway 3146 south and turn right (west) on 3147, following signs for Khai Noen Wong. Wat Phlap is a kilometre west of the fort, accessed via a short lane.

Wat Khao Ploi Waen
Built in 1832, the Sri Lankan-style chedi at this small temple stands atop the namesake hill and supposedly contains relics of the Buddha at its base. You’ll also find a Phutthabat (Buddha footprint image) in a century-old mondop along with an old ordination hall at the foot of the hill. A path of rather uneven stairs takes you to the summit of Khao Ploi Waen for a scenic view of the surrounds. The climb can be a hot one, although the plentiful bougainvillea provides some shade. To get here from Wat Phlap or Khai Noen Wong, head northwest on Highway 3147 for four to five kilometres and bear left just after a small health clinic in the village of Ban Bo Phu. The hilltop temple is a fine way to end a day that could also include the aforementioned sites.

Wat Mangkon Buppharam
Also known as Wat Leng Hua Yi, this dazzling Chinese temple bursts with colour and detail. Notice the hundreds of tiny Buddha images encased in the walls of the main shrine, which is dedicated to Amithaba and was full of merit-making Thais burning oversized joss sticks during our last visit. From there visitors work their way around both floors of the complex, stopping to burn more incense at dozens of shrines dedicated to various icons and bodhisattvas.

Wat Mangkon Buppharam is located 15 kilometres southeast of Chanthaburi town on Sukhumvit Road (Route 3), marked by a Chinese-style gate some 200 metres before the turnoff for Nam Tok Phlio. Those lucky enough to visit when the place isn’t mobbed by a busload of Thais will find a tranquil scene set to metta (loving-kindness) music. Though probably not worth going out of your way for, we always enjoy stopping here right before cooling off at Nam Tok Phlio.

Wat Khao Sukim
Revered forest monk Ajahn Somchai founded this imposing mountaintop wat as a meditation venue in 1964. His status attracted well-heeled locals who donated lavish gifts, such as mother-of-pearl furniture, giant porcelain vases and old tiger pelts with heads still attached. A large museum displays many of these items, which join all sorts of buildings to display a materialism that seems to clash with the Thai Forest Tradition’s core values of austerity and simplicity.

The temple also includes a large pond full of fish and turtles, and a huge meditation hall atop the hill affords decent views. It stands in a remote spot along a road mainly rimmed by fruit farms and is signposted some eight kilometres down Highway 3322, which cuts west off Highway 3249 about two-thirds of the way between Chanthaburi town and Khao Kitchakut National Park. We’d give it a pass unless there’s time to spare on the way back south from the national park. 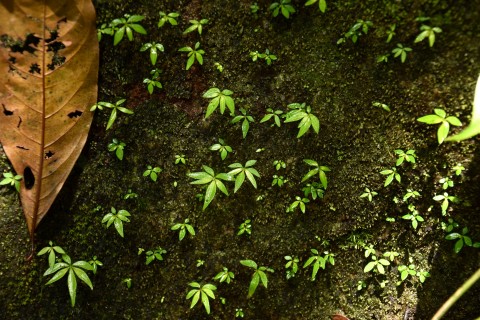 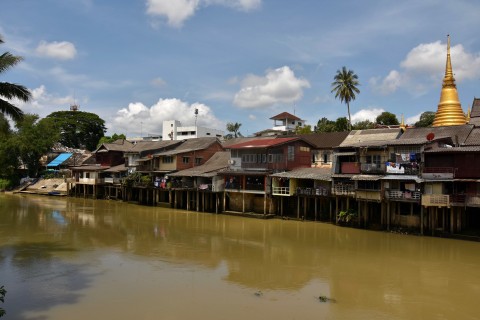 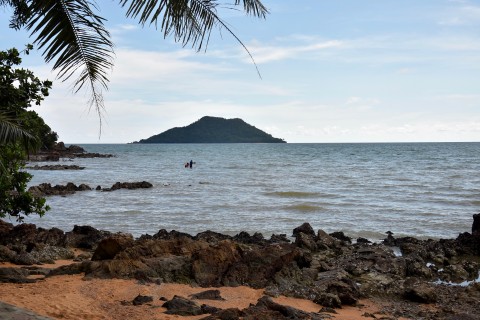 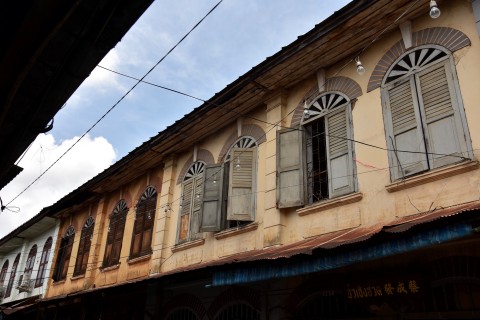 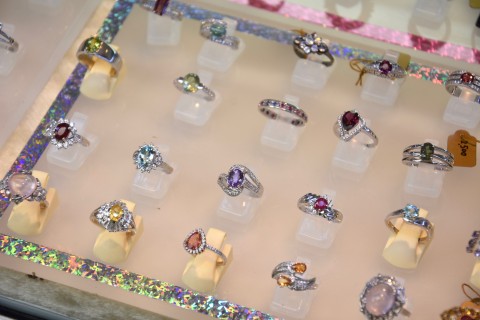 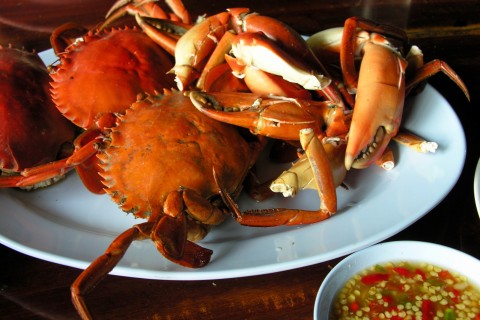 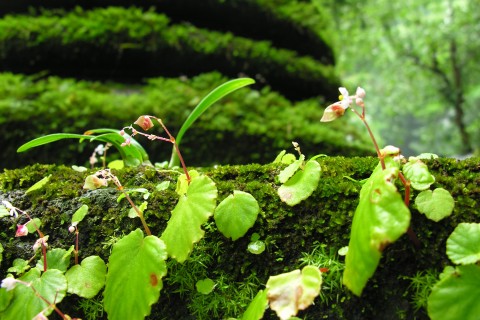 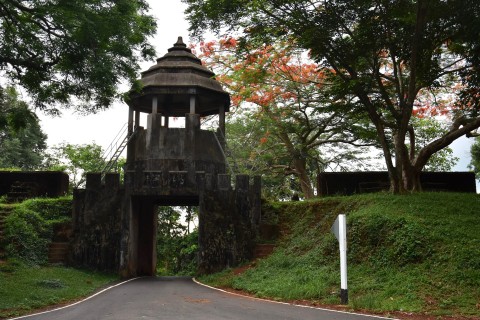