When hiking to the falls, be careful not to step on the light-blue plastic water pipes that lie along streambeds and trails; break one and you may cut off water to a portion of the island. The photos seen below were taken in December and January; expect more impressive falls from July to October. Some falls dry up completely from February to May.

Khlong Phlu Waterfall
As Ko Chang’s most popular and accessible waterfall, Khlong Phlu is worth a visit despite the entrance fee and, often, crowds of Speedo-clad revellers. A 600-metre trail skirts a stream before entering a ravine rimmed on three sides by vertical cliffs, with an angelic beam of whitewater flowing down between them. It’s possible to swim in the narrow upper pool when the current isn’t too strong, but most opt for the deeper swimming hole down below, where you can scale the cliffs and jump back into the clear water.

The entrance to Khlong Phlu Waterfall is located at the end of a side road clearly marked by signs along the main road through Khlong Prao. Locals will shout in the hopes that you’ll pay 10 baht to park in their driveways, but it’s free near the ranger station. Unless you’re Thai, you can’t avoid the 200 baht (100 for kids) national park fee, which gets you a rundown visitor centre and rangers doubling as lifeguards. You can re-use the same ticket if visiting Than Mayom Waterfall on the same day.

Khlong Jao Leuam Waterfall
Also known as Nang Yom, this waterfall is perhaps more worthwhile for the scenic hike than the falls themselves. After passing a charming house and spirit shrine, an easy trail leads for a half-kilometre through old-growth forest to a couple of swimming holes at the small lower tiers. From there you’ll have to head back or hop and wade your way upstream in search of the upper tiers, which we’ve yet to reach.

From the main road through Khlong Son, take the inland road that begins next to 7-eleven, following signs for Baan Kwan Chang Elephant Camp. From that turn it’s roughly four kilometres to the trailhead, where a family charges 40 baht for travellers to walk through their property and up to the falls. They do at least provide a toilet.

Kai Bae Waterfall
For years this refreshing waterfall remained a secret greedily guarded by long-term residents of Kai Bae. Though you still won’t find it on the tourist maps, the cat has left the bag and we think that’s good, as this is one of the more atmospheric waterfalls on the island. Water cascades down a single wall of rock, emptying into a pool shaded by lush foliage—great for a dip. We once hiked up here on a 37-degree day and had the cool waterfall to ourselves.

Take the side road that shoots inland next to the southernmost of Kai Bae’s two 7-elevens, passing Kai Bae Elephant Camp and Sanook Sanang Resort. At the fork, bear left, cross the road and head down the dirt track next to a big laundry facility. You’ll pass an old broken-down water tower and some fruit orchards before the flower-draped path slopes uphill. Here you’ll find a woman charging visitors 20 baht to cut through her land, and from there you just follow the occasionally steep trail running beside blue water pipes.

Phrao Talay Waterfall
Part of the huge chunk of land owned by the defunct Grand Lagoona Resort in a distant corner of Ko Chang’s southwest, this minor waterfall is only worth a visit if you’re paying the 100-baht fee to enjoy the excellent beach found here as well. The waterfall slips down a rock face that stands no more than six or seven metres high. No pools for swimming, but you can take a shower.

The narrow road past Bang Bao and Khlong Kloi ends at a gate where you’ll need to shell out 100 baht per person to enter the grounds. Once through, take the immediate left to find the trailhead.

Than Mayom Waterfall
It’s debatable whether Than Mayom is worth the 200 baht entry fee and you should give it a pass without losing sleep if travelling on a tight budget. The lower tiers can be beautiful with their bands of whitewater plummeting into clear pools sheltered by walls of smooth rock. Along with Khlong Phlu on the west coast, this is one of two waterfalls on Ko Chang that the national park has set up as full-scale attractions. This is partly due to its easy accessibility but probably more thanks to kings Rama V and Rama VII having left engravings here. Expect a crowd of Thai visitors on weekends.

The entrance to Than Mayom is on the main east-coast road, just south of Dan Mai. You can park near the ticket booth for free or pay 20 baht at the small shop closer to the falls. A short trail leads to the stream, from where it’s necessary to hop over some rocks with the help of well-placed ropes.

Khlong Nonsi Waterfall
If you don’t feel like shelling out the 200 baht national park fee, Khlong Nonsi Waterfall is a decent alternative to nearby Than Mayom. The falls span a few different tiers, the largest of which gushes gently over a sloped rock face onto a jagged stone plain. During dry season the waterfall withers to a trickle and the shallow pools stagnate with fallen leaves. Even then, this is a decent little hike and you’ll often have this quiet patch of forest all to yourself.

Khlong Nonsi is located at the end of a side road just north of Than Mayom, marked along the main road by a small white-and-blue sign. Motorbike parking is available for 20 baht at the house nearest the falls. From here, the trail cuts through forest just above the stream before crossing it and then ending confusingly at a dirt road. You can walk along the road or the streambed for the remaining 50 metres to the waterfall.

Khlong Neung Waterfall
Ko Chang’s tallest waterfall, Khlong Neung flows down a 120-metre-high cliff in a steep-walled valley draped in hanging roots from the surrounding old-growth jungle—impressive indeed. A narrow pool stretches at the foot of the narrow waterfall, but you may want to have a look around for critters before taking a dip. Khlong Neung crashes down in the rainy months, when safe accessibility can be an issue. In the dry months it becomes a gentle stripe of water reachable only after a somewhat harrowing climb up the boulder-strewn streambed. Only confident (and coordinated) hikers should make the climb, which took us about an hour each way despite a distance of only a half-kilometre.

After passing signs for Salak Khok and Chek Bae along the main road into Salak Phet, take a right following signs for Salak Phet Seafood, then the immediate first right down an unmarked paved lane. After passing the remains of a visitor centre, bear right and park where the lane abruptly ends. Here a steep trail tumbles down to the streambed, where you’ll need to climb over a low cement wall and begin using trial and error to find safe paths over the boulders—be extra careful when the terrain is wet. The last obstacle is a massive boulder that’s best skirted to the left. Entry is free.

Khiri Phet Waterfall
Not far from Khlong Neung but easier to reach, Khiri Phet churns over a 10-metre-high slope of rock in a serene patch of jungle alongside ancient trees and abundant birdlife. The waterfall supposedly conceals some upper tiers, but we’ve found the going rough enough to stop our search for them. Khiri Phet completely dries up in dry season.

Follow the same directions for Khlong Neung, but take the second paved road on the right rather than the first. This runs straight to a parking area, where you can take the wider path that leads slightly uphill to the right and eventually drops down into the streambed. You’ll then need to hop some rocks for the final 200 metres to the waterfall. Keep an eye out for the trail on the way back; we missed it and had to double back. 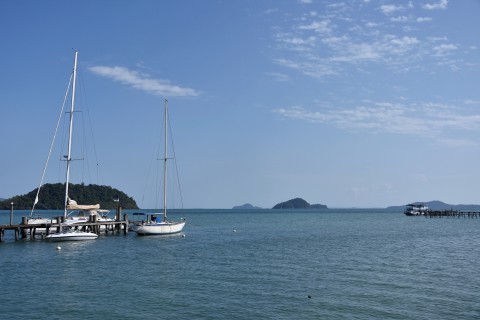 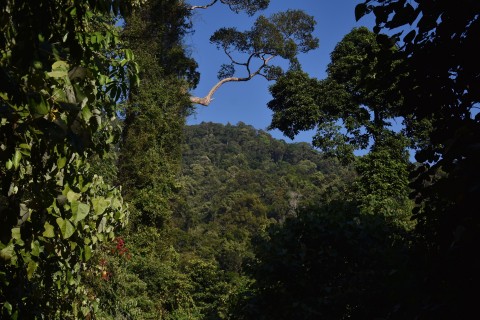 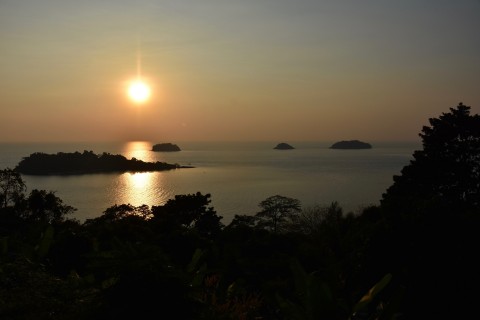 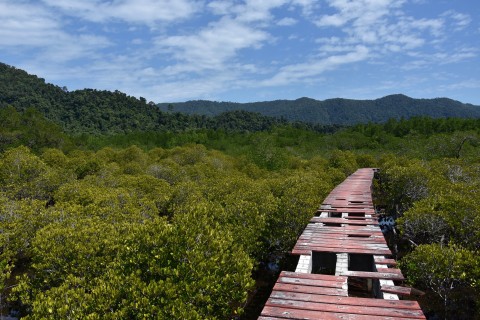 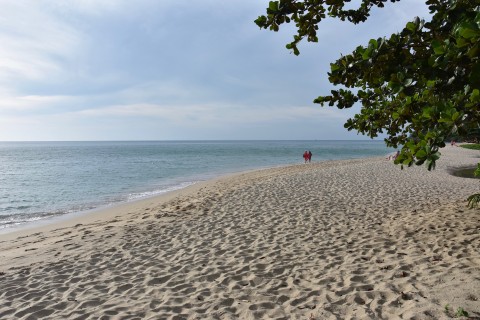 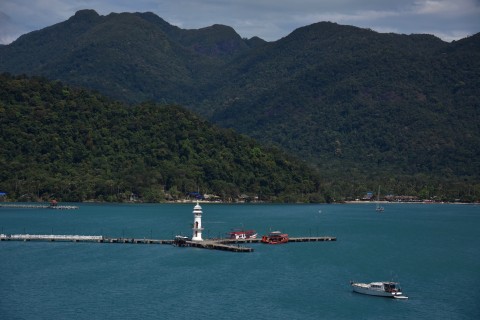 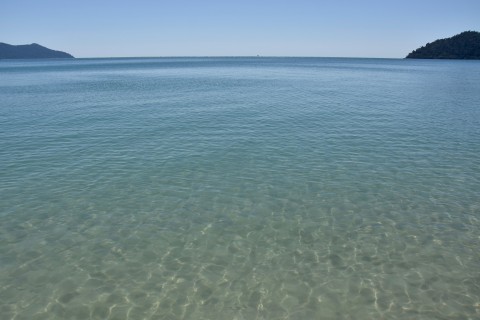 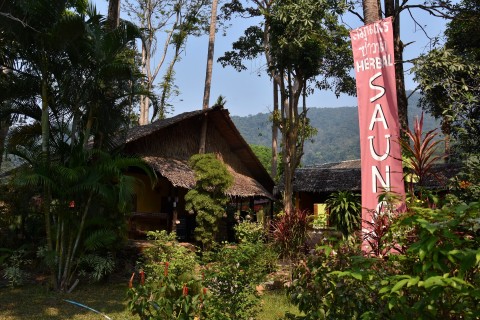 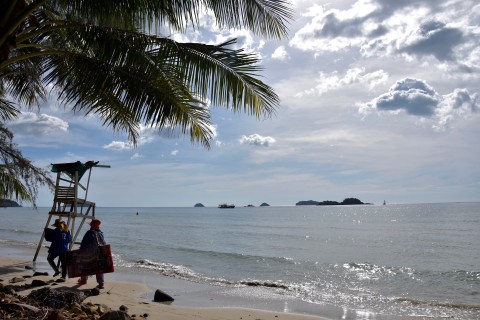 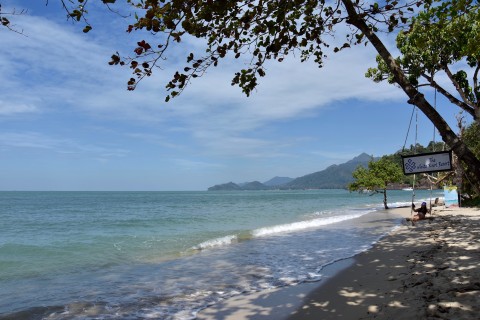