The best beaches on Ko Kut

The best beaches on Ko Kut

Some of Thailand’s finest
Published/Last edited or updated: 20th March, 2018

Out of all the Thai islands, we think Ko Kut owns the most beautiful collection of beaches. As a whole, they won’t disappoint if you seek clear aquamarine water lapping up to sand so soft that it made our bare feet want to sing.

Running from north to south, this list covers all beaches accessible by road (that we know of), though we’ve not yet made it to some on the north and east coasts that can only be reached by boat. If heading to the southern beaches, expect southerly winds to make the sea a little choppy (though not surf-worthy) at times from around January into the rainy season.

Soneva Kiri Beach
Set in the western corner of north-facing Luk Uan Bay on the north coast, a sand pinnacle juts out to sea at the centre of a gorgeous off-white sand strip in front of the ultra-lux Soneva Kiri Resort. We met some kayakers who made it to shore, but there is typically no land access to this beach for non-guests. The beach stays sheltered thanks to Ko Mai Si, a satellite island with nothing but rocks and forest hiding Soneva’s private airstrip.

Kayakers with some strength to spare could keep paddling east past Soneva’s beach to a second “secret beach” set beyond a headland in the far eastern corner of Ao Luk Uan—we’ve heard it’s worth a look. As far as we know, this beach also cannot be reached by land unless first gaining access to the Soneva Kiri grounds.

Khlong Rahan
Rather than trying to climb the walls at Soneva Kiri, look left while cruising north on the same northern road and pull off when you see several sandy trails piercing into a large coconut grove. Just beyond the towering palms stretches this little-known beach with no development save a stilted house near the mouth of the namesake canal.

Backed by tall casuarina trees in addition to the coconut palms, Khlong Rahan’s curve of soft sand stretches across the channel from Ko Rad, a small satellite island visited on many of the snorkeling tours around Ko Kut. The water was deep enough for a swim when we visited at high tide, and apart from one family and one couple, we had the whole beach to ourselves.

Khlong Yai Ki
This short but very pretty beach runs to the south of the same-named khlong and opposite Captain Hook Resort. Only a few coconut trees and forest backs brilliant white sand that culminates at a wide patch between the sea and estuary. Despite the remote location you’ll typically find at least a few people lounging or playing beach volleyball. They most likely paddled or swam over here from Captain Hook or Bann Makok, which is situated a little ways further up the khlong.

Staffers at these resorts will say that Khlong Yai Ki Beach can only be reached by boat, but we found a way here by hopping along the rocks on the south bank of the khlong—just bear in mind that this “trail” may become impassable when the tide is up. To get here, make your way to Bann Makok and either rent a kayak or look for the trail to the left of this resort’s entrance.

Khlong Mat
This is just a sliver of a beach and we found it a little more crowded than others due to the small size and proximity to a pair of fairly large resorts: Suanya and Koh Kood Beach Resort. Some guests told us the snorkeling was quite good (for Ko Kut) off the rocks and headland towards the northern end of the beach.

The fresh water from Khlong Mat itself empties into the sea at the south end of the beach, where a small wooden pier juts out to the sea. Head back inland alongside the canal to find photogenic boats and stilted houses in Baan Khlong Mat, which we’ve heard is the oldest village on Ko Kut.

Ao Tapao
Stretching for about a kilometre near the centre of the west coast, Ao Tapao runs from the chunky concrete of Nam Leuk Pier down to a wide and sandy point in the south. Some of the casuarina-shaded khaki sand is coarser than the average Ko Kut beach and you know what that means: sandcastles!

Apart from the stylish Shantaa, which covers a series of hills on the northern headland, Ao Tapao’s mainly midrange resorts failed to impress us. There’s no budget accommodation but the central location makes it easy to stop by on a day trip.

Ao Noi
A tiny crescent of fine white sand, backed by palms and hemmed in by wooden piers with amazingly clear water in between—Ao Noi is about as close as you’ll get to the Maldives without leaving Thailand. The lone place to stay, Aow Noi Resort, had strangely locked their gate from the road and when we showed up on a motorbike a few locals shooed us away shouting “no go!”

Luckily we learned of an alternate entryway via a short coastal trail beginning just beyond the reception pavilion at Away Resort on the north bank of Khlong Chao. On arrival at Ao Noi we learned that the resort was, in fact, open, but with many rooms in a state of disrepair. We asked at reception but they never did tell us why they were locking potential guests out of the only road entrance.

Khlong Chao
Ko Kut’s best-known beach stretches like a wide and soft blanket of white sand for nearly a kilometre south from where the eponymous river meets the sea in a never-ending game of tug of war officiated by the tides. Along the sand you’ll find only midrange to high-end rooms at Peter Pan Resort and its neighbours, but backpackers can dig into Ko Kut’s best selection of budget rooms at places like Mangrove Bungalow after a five-minute stroll away from the beach.

The beach’s central location has made it the most popular on the island and it’s the only one where you might have trouble finding a secluded patch. But even Khlong Chao stays quiet compared to really busy beaches on other Thai islands. Eventually leading to Khlong Chao Waterfall, the mangrove-lined canal itself presents good opportunities for kayaking and birding.

Ao Ngam Kho
This mostly narrow beach stretches across from an islet and enjoys a convenient location just south of Khlong Chao. The southern part of the beach, by Ngam Kho and Horizon resorts, is kind of crappy regardless of tide, with only mudflats and rocks joining the clear water. The central patch just north of Dusita Resort is however very good.

Staffers at Horizon told us about some decent snorkeling off the southern headland and it did look promising. We appreciate how all three of Ngam Kho’s resorts have resisted the temptation to follow the Khlong Chao trend and rebuild exclusively for upmarket guests.

Haad Sai Daeng
This tightly ringed-in cove hosts a single resort—A-Na-Lay—with its bungalows backing the small beach and a boulder-rimmed headland. The name means “Red Sand Beach” but we really had to convince ourselves of seeing a subtle pinkish shade in the fine khaki sand that squeaks underfoot.

Like many of Ko Kut’s beaches the water is shallow and usually calm, making it great for families. A-Na-Lay does not try to block non-guests from hitting the beach.

Ao Bang Bao
Not to be confused with a bay of the same name on Ko Chang, Ko Kut’s Bang Bao boasts one of the most breathtaking beaches on the island. Long-reaching headlands to the north and south keep the water calm and clear, with a shallow drop off that makes it ideal for families. Those looking to swim can stroll out along any of five long wooden piers and jump on in.

Siam Beach Resort overlooks most of the real beachfront and just south of that is Sand and Sea, a backpacker spot reached via a wood footbridge over the mouth of a canal. In Bang Bao’s northern corner, most of the sand disappears at high tide in front of To the Sea, The Beach Natural and Koh Kood Resort, all midrange spots built close together on the hillside.

Ao Ta Khian
With its super soft white sand and Robinson Crusoe setting, south-facing Ao Ta Khian is another one of our favourite beaches on Kut. Towards the eastern end you’ll find a brilliant undeveloped stretch shaded by casuarina, umbrella and coconut trees. At the centre sits Cham’s House, an upmarket resort that’s popular with mainland Europeans.

At the other end of Ao Ta Khian sit Pa Hin Sai’s oversized bungalows for families and couples on a flashpacker budget. The beach narrows here while meeting some rock formations, umbrella trees and piles of shells and coral that have washed up with the tide.

Khlong Hin
“Rock Canal” Beach boasts powdery off-white sand reaching between a rocky cape and a dreamy estuary to the west. It’s one of two waterways that flow on either side of a rocky outcrop at the centre of a bay with twin beaches—Khlong Hin to the west and Ao Jak to the east—on either side. This distinctive geography makes both of these beaches exceptionally beautiful.

Trails and footbridges connect the two, taking you past jagged rocks, abundant trees, hammocks and kayaks waiting by the serene waterways. Backing all of Khlong Hin Beach is a characterless resort catering specifically to Russian tour groups, but the smaller Montana is a solid option for independent-travelling flashpackers.

Ao Jak
Like its neighbour Khlong Hin, Ao Jak is a shallow and well-sheltered beach with a greyish to yellowish very fine-grained sand. Wide swathes of coconut palms back almost the entire beach up to the eastern headland with its jungle-draped hill—photogenic indeed.

Ao Jak’s only place to stay is the long-running Neverland, a fitting name for such a beautiful and soothing spot.

Khlong Phrao
It’s easy to see why they named this one “Coconut Canal” after seeing the massive field of coconut trees that back most of a kilometre-long beach in the south of Ko Kut. The soft off-white sand joins a long wooden pier and a narrow mangrove-draped canal at the western end to create idyllic scenes.

Khlong Phrao has only a handful places to stay, including a pair of resorts in the eastern corner that draw mainly Russian guests. We’re fans of Gumm Lonely Club for a budget room beside the canal, and nearby Rest Sea isn’t a bad option for some luxury. Apart from these you’ll find only a tiny stilted village, though we won’t be surprised to see more resorts pop up around here in the future. 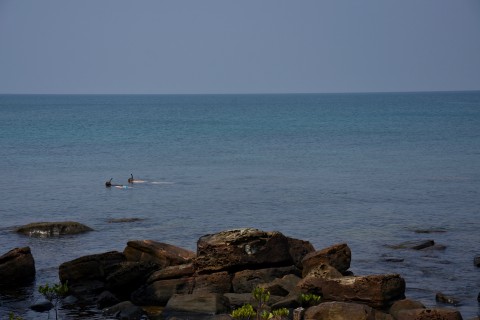