Underrated beaches, fishing villages and fruit farms stretch between mountains and the Gulf of Thailand in Trat province’s long southeastern panhandle on the way to Cambodia, making for a worthwhile day trip from Trat town.

Sukhumvit Road shoots for nearly 100 kilometres from Trat town to the Cambodia border at Had Lek. At one point, where the jungle-clad hills and sea press in from either direction, a sign informs travellers that they’re passing through “the narrowest part of Thailand”. How’s that for travel bragging rights?

The beaches are marked along the main road by English signs and it’s impossible to go more than a few kilometres from north to south at any given time, so you can’t get lost. The first beaches you’ll pass are Haad Sai Ngam and Haad Sai Kaew, which is a lot quieter than the Haad Sai Kaew on Ko Samet but almost as beautiful. This area hosts a Centara luxury resort whose presence heralds the quality of these overlooked beaches.

One of our favourites is Haad Ban Chuen, a wide and empty stretch of squeaky, powder-white sand and a few humble seafood restaurants in the shade of casuarina trees. While enjoying a phenomenal meal of squid with yellow curry and whole steamed fish, a vendor appeared to show off the saltwater crabs she’d captured that morning. We bought a bundle for 200 baht, but then felt sorry for the still-breathing crustaceans and cut them loose into the sea.

While some of the beaches are great, much of the area possesses a desolate atmosphere thanks to the isolated geography and heavy military presence. Some of the inland villages appeared deserted save a few scraggly dogs. But after passing a landfill we happened on a scenic fishing village with stilted houses, sun-drying fish laid out on bamboo platforms and old women selling veggies from their roadside gardens.

A side lane marked off the main road leads to Nam Tok Saphan Hin, a small waterfall where a stream slips over a black rock shelf accounting for the name, meaning “Rock Bridge”. After chilling under the banyans and dipping our toes in the wide pool, we stopped by a hillside durian grove where a farmer was happy to let us wander around the trees bearing these spiky fruits with insides that taste like custard and smell like last week’s garbage.

Further south is the small town of Khlong Yai, with the similar Had Lek village nudging up to Cambodia. There’s not much to see in these towns apart from large fishing piers, but a market in front of the border checkpoint is worth a quick stop for a baguette and a browse of the trinkets.

From Trat town, Sukhumvit Rd (Route 3) runs all the way to Had Lek and the Cambodian border. Public minibuses ply this route but you’d really need a private vehicle (car or scooter) to make it worth a day trip. 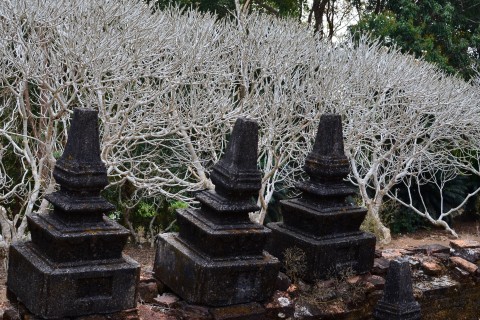 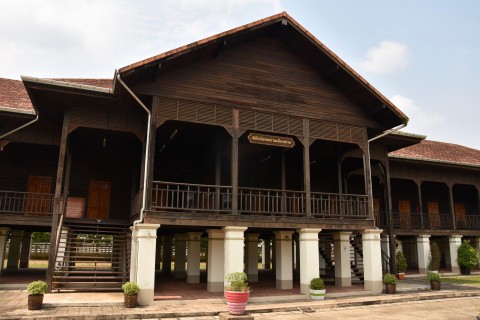 A walk through history