One of the most famous Angkor period temples in Thailand, Prasat Phanom Rung crowns an extinct volcano in the remote southern reaches of Buriram province.

It was never completely ruined, overtaken by jungle or defaced by battles, and consequently it remained in relatively good condition before a Thai Fine Arts Department makeover began in 1944 and restored it to the near-pristine state seen today.

While there is something to be said for giant roots squeezed around crumbling masonry, it’s special to see an ancient Khmer complex, lacking only a coat of stucco and whitewash, in an otherwise near original condition. (Though there would have been, of course, wooden components to the original temple which can only be guessed at.) Once home to Khmer royalty, the palace and sanctuary is placed at least 300 metres above the surrounding villages and rice paddies.

Facing east and these days leading up from the car park and souvenir stalls, the main entrance is a masterpiece. There’s a great sense of suspense created as you climb the naga-bordered staircases to see the tower of the main shrine gradually appearing ahead and above. Stone gardens and the remains of an ancient royal estate can be seen alongside the lumbering laterite walkway and staircase.

The main entrance gopura is also in immaculate condition and the ponds seen on either side of it are said to be relics of the original volcano crater, though we wouldn’t guarantee that. Earliest constructions at the site probably date to the ninth century and some brick towers in the inner courtyard are from the early 11th century, but most of what you see today dates from the reign of Suryavarman II in the early 12th.

The sanctuary was built to honour the Hindu god Shiva, a modest Southeast Asian fill-in for Tibet’s sacred Mount Kailash. Inside a 23-metre tall sandstone tower that represents Mount Meru, the mythical centre of the Hindu universe, a large Shiva lingum gets bathed in sunlight at certain times of day. The outside of the tower is decorated with nagas, lions and other guardians among the rishis and directional gods.

Clearly some looting went on before the Thai Fine Arts department stepped in and many of the lintels and pediments sadly have figures missing, though plenty of fine reliefs were saved. A series of nearly 1,000-year-old lintels display scenes from the epic Ramayana, while other carvings depict images of Shiva and an incarnation of Vishnu among the finely detailed floral pediments. Numerous English info boards explain what you’re looking at.

Every year on the 15th day of the waxing moon of the fifth lunar month (some time in April), sunlight shines through all 15 of the temple’s portals in a visually stunning spectacle that supposedly dispels negativity for those who see it. This is the main event of the Phanom Rung festival, which also includes a parade, folk performances and the usual Thai festival revellery.

The site may be slightly over-manicured for some tastes and it can be difficult getting a shot of the temple without including one of the info signs. The complex is surrounded by very well-maintained gardens interspersed with tall trees and the occasional break in greenery that allows you to take in a view. Yes, it’s a very different feel to Preah Khan or Beng Melea but as a historical park, with the emphasis very much on park, Phanom Rung is a highly pleasant spot to wander around.

Phanom Rung is popular with Thai tourists and at weekends and public holidays can get very crowded. The complex isn’t too big, so 30 to 45 minutes will allow you time to see all of it, with perhaps an extra 10 minutes to stroll through the lush gardens and check out the flowering trees and plentiful bird-life. The new visitor centre near the foot of the steps is also worth a peek.

While most visitors enter through the main gate and then walk up the stairs, you can also buy a ticket and enter at Gate 1, in which case you’ll enter through the backdoor and could potentially be the first people there if arriving early. The entrance fee is 100 baht for foreigners, though a 150 baht ticket gets you entrance to Phanom Rung and the nearby associated site of Muang Tam. The car park has plentiful souvenir stalls and some cafes for drinks or simple lunches.

Prasat Phanom Rung is located 30 kilometres southeast of Nang Rong, 65 kilometres south of Buriram town and 85 kilometres southwest of Surin town. Rental motorbikes or cars/drivers can be arranged in all of these places. Apart from a few small roadside resorts, the nearest accommodation is in Nang Rong, where guesthouses like Honey Inn and P.California can help to arrange a tour for 1,000 to 1,500 baht (per car, not per person), which will include Muang Tam and perhaps some of the minor ruins. If coming by public transport, catch a Chanthaburi-bound bus from Nang Rong or Buriram and ask to be let off in Baan Ta Pek, where motorbike taxis are available. If going this route, don't expect many people to speak English. 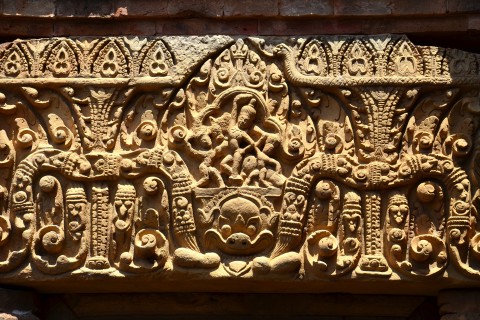 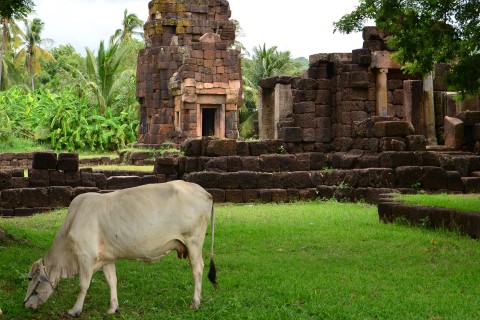 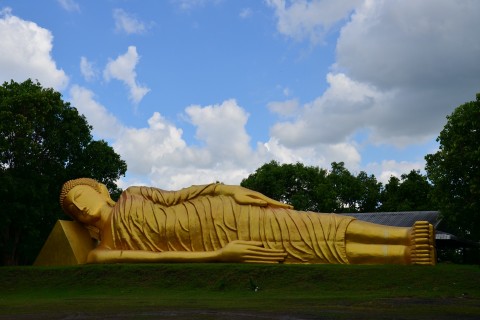