If Dorothy were here she’d be passed out by now.

While it’s possible to walk around the park as much as you like, most choose to hop on a park-provided tram that shuttles visitors from the welcome centre to where most of the trails begin near the top of the mountain. It was a lot of fun cruising the park with a group of spirited locals while listening to the goofy yet enjoyable melodies of Isaan country music that blared over the shuttle speakers.

Once at the top, we set out on a trail that snakes through a forest and around rock formations that look to have been deliberately scattered by giants. At the top of the hill, the trees cleared just enough to catch a glimpse of the remote hills stretching to the west.

Not much out there for a long way.

We then took a walkway raised over a green hillside with pink and white dok kra jiao hovering gracefully over the grass. Resembling lotuses and tulips, these blossoms are considered by Thais to be among the most beautiful flowers in a country where countless types of blossoms thrive.

Further down the hill, we strayed off the main path to soak up the scenery at a pond rimmed by breathtaking pink-green hillside. The sun emerged from behind a cloud. Streams of water trickled over rocks as the flowers swayed ever so slightly in the breeze.

It felt like being in the sweetest of dreams.

We then made our way towards the western part of the park to check out a cluster of the large, oddly shaped rock formations that give the park its name (pa hin ngam translates as “forest of beautiful stones”). Wind and water have thinned the bases of the rocks over time causing a “lollypop effect” with narrow bases and fat tops. A local legend tells how the stones are embodiments of angry terrestrial spirits jutting forth from the ground. To us, the rocks exemplified the artistic quality of mother nature.

The village below gets a big thumbs up.

Pa Hin Ngam National Park is located in the southwest corner of Chaiyaphum province, near the borders of Lopburi, Petchabun, and Nakhon Ratchasima provinces. It’s less than a two-hour drive from Chaiyaphum town, and just over two hours from Nakhon Ratchasima, Khao Yai or Lopburi. Come on a weekday to avoid the flower-peeping crowds. A few small resorts and restaurants are found near the park's gate, and tents may be rented for use at a campground near the welcome centre.

Pa Hin Ngam National Park is located 100 kilometres southwest of Chaiyaphum town. It's situated deep in a rural area that requires a private vehicle to reach. From Chaiyaphum town, head west on Highway 225 and hang a left on Highway 2354 in the village of Nong Bua Rawe and follow signs to the park from there. Admission is 100 baht.

Our top 1 other sights and activities in and around Chaiyaphum 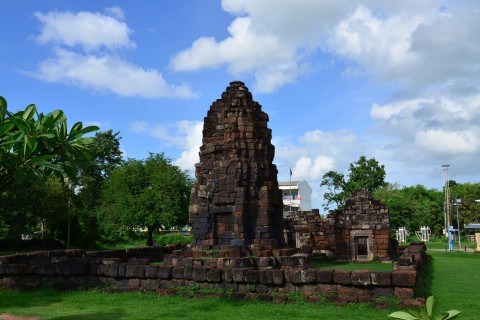