More on That Phanom

Ochre-robed monks and wrinkled women in traditional Lao-style skirts stroll the twinkling grounds. Incense smoke spirals towards the chedi’s golden top, a slight breeze off the Mekong River making the brass bells chime. Non-touristy, steeped in legend and revered as highly as any Thai temple, Wat Phra That Phanom is something special.

Anchoring one of Thailand’s oldest and most sacred religious sites, Wat Phra That Phanom’s namesake chedi symbolises the Isaan region’s important place in the Buddhist faith. It stands 57 metres over the same-named river town, drawing streams of monks and merit-makers from all over Laos, Thailand and beyond. Only a handful of foreign travellers come to join them.

As told by locals, the site’s history may not hold up to a thorough review by historians, but nevertheless it’s a compelling story. A mere eight years after the Buddha passed on, as the legend goes, part of his breast bone was carried all the way here by the venerable Mahakassapa, one of the Buddha’s foremost disciples who was known for his immeasurable virtue and austerity. 500 arahants (enlightened saints) are said to have joined him.

Getting from Northern India to what’s now a distant corner of Northeastern Thailand would have normally been quite the journey 2,500 years ago. But not for an enlightened meditation master (think of him as something of a non-violent Buddhist Jedi knight) like Mahakassapa. A historical volume composed by the temple’s current abbot, Phra Thepworamunee, claims that the monks “flew into the sky and landed at this very spot“.

We can say with certainty that, for one, the site is very old, and for two, that many Buddhists believe it was miraculously chosen to be a holy site by some of the earliest arahants. Outside of the historical Buddha’s actual stomping grounds in India, few Buddhist sites are as sacred as Phra That Phanom.

It’s one of six top-grade royal temples in the Thai kingdom, and one of only two that are not located in Bangkok (the other being Wat Phra Phutthabat in Saraburi). Believers kneel before the chedi to offer incense, flowers and candles before circumnavigating it three times on foot. It’s believed that anyone who does this on seven different occasions will enjoy a life of happiness and prosperity, perhaps explaining why That Phanom’s locals seem to be among the happiest we’ve come across in Thailand.

Actual excavations have shown that the site dates as far back as the 8th century CE, placing it in the same era as some of the oldest Buddhist sites in Northern Thailand and Laos. The original chedi is widely considered to have been the first to appear in what’s now Northeastern Thailand. Back then, it looked much different than what you see today.

As depicted in a painting in the excellent on-site museum, the original chedi was a stumpy looking thing, made out of bricks and rising only eight metres from an earthen mound. A replica of this original is located within eyesight of the current temple grounds, surrounded by a pond in the heart of That Phanom town, which grew up around the chedi and was possibly the capital of the Si Khotrabun kingdom centuries ago.

The chedi that would mark the Phra That’s current location was perhaps built over 1,000 years ago and renovated/replaced on a number of occasions. It had become a ruin by the turn of the 20th century, with “banyan trees the size of a person’s arm” growing through the bricks. While meditating here, the late revered forest monks, Ajahn Sao, Ajahn Mun and Ajahn Tha, felt strongly that the chedi did indeed contain a relic of the Buddha and should be respected to the utmost.

The three monks requested that elders from That Phanom travel to Ubon Ratchathani and ask an expert mason monk, Phra Khru Virocana, to help them reclaim the site from the jungle. Over the next few years, he oversaw the construction of a 43-metre-high chedi that stood for seven decades. A smaller replica of this chedi can now be seen at nearby Wat Phra That Renu.

The chedi’s base cracked after heavy storms in August of 1975, and within a few hours it violently toppled into a massive pile of rubble. A legend had been floating around that should the chedi fall, so would the Lao kingdom. Sure enough, Lao communist forces overthrew the Royal Lao Government and forced King Savang Vatthana to abdicate in December of the same year. Back in That Phanom, the locals began to rebuild.

Completed in 1979, the chedi seen today is a particularly impressive example of the Lao style of design. It stands on a nearly 13-metre-wide square-shaped brick base and rises gracefully to a multi-tiered golden umbrella. Rimmed on four corners by ancient stone markers and surrounded by a wall, the inner section around the chedi is where believers go to make their offerings. Only monks are allowed into the area closest to the chedi’s base.

Just beyond the chedi wall, a striking seated Buddha image sits above a second Buddha protected by seven naga serpents. In front of those, over a dozen more Buddha images display many of the postures commonly used in Buddhist art. Usually occupied by a monk who blesses visitors with holy water and ties white threads around their wrists, a small ordination hall stands to one side. Every evening at around 18:00, monks gather to chant in front of the chedi.

As of 2013, Wat Phra That Phanom also boasts the largest gong in Thailand, set up at the rear of the grounds and adorned with the flags of all ASEAN nations. You’ll also find a large Bodhi tree; a single-floor structure built centuries ago for accomplished meditation monks; outer cloisters with various Buddha images; and some interesting tiger statues guarding the front gates. No shortage of food and flower vendors set up in the leafy car park.

In the temple’s fairly large museum, an extensive set of hand-written information boards explain the various legends of the Phra That along with some of what’s known about its long history. Along with ancient Buddha images, Thai coins and other antiques, the museum houses the base, upper piece and exquisite tiered umbrella that were all part of the chedi’s late 17th-century incarnation. A nearby souvenir shop sells a few English books along with the usual postcards and amulets.

Wat Phra That Phanom’s extremely highly revered status means that visitors should take extra care to be respectful. Pants and skirts should cover the knees, shirts should cover the shoulders and otherwise dress should be non-revealing. Hats and shoes should be taken off before entering the ordination hall, or the area immediately surrounding the chedi. Photographers should stay out of the way of visitors who are circumnavigating the chedi on foot.

Wat Phra That Phanom is located off Highway 212 in the heart of That Phanom town. Frequent minibuses running between Mukdahan and Nakhon Phanom drop travellers off directly in front of the temple and cost 40 baht from either city. If possible, we recommend staying in That Phanom to enjoy this very friendly riverfront town. The temple does not charge an admission fee, but you’re welcome to make a donation. 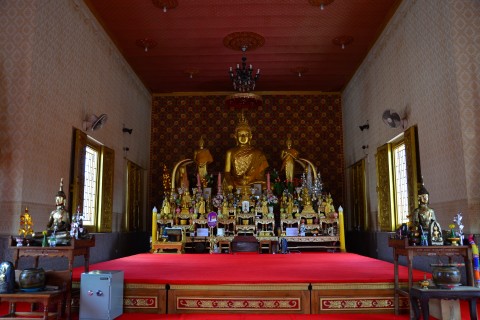 Another chedi and Phu Tai wears 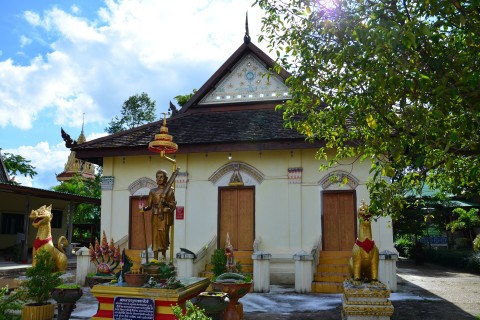 Known for the murals